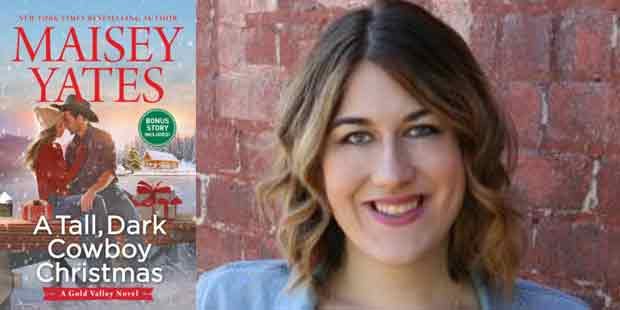 “A Tall, Dark Cowboy Christmas,” the second book in the series by Maisey Yates, is an emotional story that blends grief, hope, love and wanting to belong. The hero and heroine connect through their feelings of losing a loved one.

“We can all empathize with the core feelings of grief and loss,” Yates said. “But those who get deep into their emotions can go through a process of healing. Many of my stories, including this one, have the characters search for belonging and to be loved for who they are. I guess I am a frustrated control freak that wants to fix the world, so I fix it in my fictional world instead.”

McKenna Tate is homeless and decides to spend the night in an abandoned cabin on the Dodge dude ranch. One of the owners, Grant, discovers her and realizes she is destitute. Bringing her to his brother Wyatt, who runs the ranch, and his sister-in-law, Lindy, they decide to offer her a job under the direct supervision of Grant. McKenna lost her family at a young age when her mother left her, and was sent to live in foster homes. Wandering from relationship to relationship, now at the age of twenty-six she finds her birth certificate that names her real father. Grant also has a sense of loss after his mother and wife succumb to a terminal illness. The hero and heroine find they are able to confide in each other and both long for a sense of belonging. They look to Wyatt and Lindy as role models and seek their advice.

Yates was influenced for this story because Oregon is a doctor assisted suicide state.

“I wrote into the story that Grant married his wife knowing she was dying and stayed with her,” the author said. “Then everyone in the town remembered him as a man to be pitied and that is his claim to fame. I based it on someone who lived here and told me her husband died of cancer. She could not walk through a store without someone asking her about widowhood. She thought how people are fascinated with grief. I wrote the Grant quote in the book, ‘But they also love a tragedy that isn’t theirs. Because they’re not the ones that watched someone they loved suffer and struggle for years.’ My friend said she thought people really do not have the time to listen. They express compassion, but just wanted her to say fine so they could move on. I reflected, when we ask how people are, do we mean it and care? I thought, how do I treat people when they are having emotional pain or is it shallow pity? Do I actually act with compassion and actually listen to people when they talk? Writing stories like this is how I work things out.”

Both Wyatt and Lindy were the main characters in the first book of the series, “Good Time Cowboy.” As the owner of a winery she makes a business dealing with the dude ranch owner to attract vacationers, even though she sees him as an arrogant womanizer. Yet, there is also a sexual tension that she cannot deny, which puts this story into the hot and sexy category.

But if readers overlook the intimate scenes they will also see a story of two people struggling to make a life for themselves. Lindy is recovering from being divorced after ten years of marriage, and Wyatt is struggling to overcome family problems. Lindy prefers order and structure, creating a persona of being cool, sophisticated, well-dressed, and in-control. She realizes that there is an attraction to Wyatt, an easy-going, sexy, charming, and a commitment-free cowboy. The intimacy starts out as casual, but eventually they fall head over heels in love.

Rodeos play an important role since Wyatt was a bull rider.

“The horse stuff makes it into my books because my best friend is a horse person. It is all what she experienced. But I did grow up going to rodeos and still try to go every year. I know a couple of rodeo cowboys. All my inspiration came from watching and listening. What motivates me is how they see the world. They are brash young guys like Lindy’s brother Dane who think they are bulletproof and untouchable with an innate cockiness. Wyatt is a player from his rodeo days, who is a bit shameless. He thinks he is better than anyone, but is very protective toward women. Lindy never feels victimized and enjoys the relationship with Wyatt. She is smart and knows her comfort level. Lindy likes the sexual place she is in with Wyatt. I would say she is strong, organized, determined, and an opportunist in a good way. McKenna and her are survivors.”

Both of these novels will grab readers and will not let up until the final page. Yates’ plots delve into the character’s personality and how they compare/contrast with each other. Through the hero and heroine’s eyes people find a heart-wrenching story.