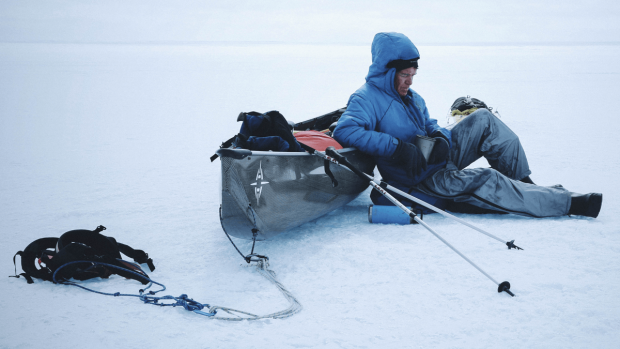 In 1989, six explorers loaded up sleds, supplies and dogs heading out across Antarctica to be the first humans to do so. The purpose of the over 3,000-mile trek was to convince world leaders that there was rapid change there and to get leaders to renew the 50-year Antarctic Treaty to protect the area from those who would profit from drilling etc.

The diary keeper of the journey was Will Steger and at the age of 75 and cancer survivor, he has decided to take on the Arctic completely on his own. Pulling his own supplies in a aluminum canoe and two smaller sleds. While on the trip he recalls the ’89 trip, those who took it with him, the perils and how it has affected him to this day.

His memory is completely clear about the 3,741-mile journey that lasted through months and months of cold, a 40-day storm that was merciless, trying to stay alive but also discovering what was happening to the ice they were riding on.

Steger has spent his life on journeys that have taken him to some absolutely stunning places that most of us will never see. Those journeys have brought him early to the realization that he wanted to help protect and preserve such places of brutal beauty. Spending time away and in a home that is secluded near a river, Steger understands who he is through the years and has embraced his calling.

Through photos and recordings, AFTER ANTARTICA is a riveting experience (without the cold) that allows the viewer even the smallest glimpse of what happened to these men. Deciding to take a journey like this is one thing, actually doing it from start to finish is exceptional. Even debating whether to walk the last few miles or get help with a truck is something none of these men would even consider.

What would bring such a film to viewers? It is director Tasha Van Zandt that tells the story of how that came to be. “My journey with Will Steger began at a very young age. Growing up in Minnesota, Will Steger was a hometown hero. It felt like everywhere I went people were sharing tales of his legendary conservation-focused expeditions. I remember being gifted a National Geographic magazine that featured his expeditions. I was immediately inspired by the otherworldly images and the way he had used expeditions as a tool for international cooperation and using his platform as a means of effective change.”

He has also authored the books Top of the World: Crossing Antarctica, North to the Pole and Saving the Earth.

What makes this documentary to stunning is the world that Steger chooses to protect is one that has needed attention for quite some time. Every journey he has taken is to present to the world the effects of what we do on our world. Whether we can walk on these places or not, ridding our view from everything but the ice – there is nothing that can be argued. It is here and now, and Steger puts it right in front of us.

I could never imagine making such a journey as the men did in 1989, especially without the technology that we have today to keep track and help if needed. Those men were using a radio that would be useless today. When Steger makes his walk in Arctica, using a SAT phone once a day to stay in touch still had me jittery.

That being said, watching him make the trek alone with vast miles and miles of nothing pulling a canoe behind him shows the dedication he has to the environment. At the same time, Steger knows that he can handle being alone for such a long period of time. Listening to his writings it is clear he had no problem expressing himself then and has absolutely no problem expressing his emotions now.

AFTER ANTARTICA spends its time expressing the dangers and without preaching at the audience, instead uses the footage and interviews to reach that place that makes us, as the viewer, want to know more and become informed ourselves – helping one voice at a time until the planet hears us all.

In the end – he believes in the frozen world!