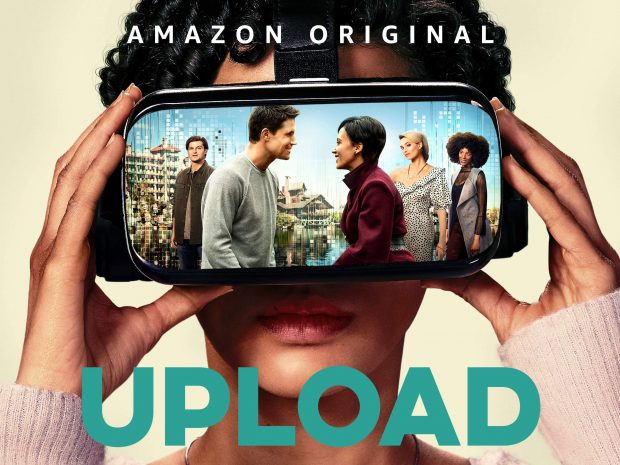 A futuristic series where you can upload and become a digital self in the afterlife as Nathan ends up in Lakeview. The world has changed such as no cell phones, and other apps. The idea came from Greg Daniels time as a writer on SNL.

The idea of tech is what UPLOAD is about, tell about the idea?

Greg: This is not a lot like my original idea. The idea came to me from an ad for CD players. I’m a very old comedy writer. The original idea came when you can a gramophone without a wax cylinder. I didn’t start this version until 2014 and I was able to include the big tech company’s. The last time I did a panel for Comic Con I was doing a panel called People of Earth and people asked me what I was doing there. I told them it was a sci-fi project, well, this is that sci-fi project. It’s mostly high tech company’s that merge with fast food and that’s what is happening in the future. The show is very much about unfairness because we, as human beings, create our own heaven and it’s for profit and not supernatural for this show. It has all the greedy downsides and someone like Nora is struggling to pay for uploads for her dad and wealthy people might not necessarily deserve it but they are there. I remember reading in a business book that when they make printer, they only make one kind of printer and it’s the fastest one but you have to have others for different price points. So the slower printers are the fast printer with a chip that slows them down. That’s the spirit behind it.

Robbie: I never thought about that and now I am. The big thing for me when I was reading that line for the first time and the hundredth time is about how fair it is about the incoming inequality. It’s not heaven, its built by corporations and the parts of life are involved in it. He starts off a bit of a shallow douchebag but you see a different side of him when he sees the 2 gigs and people don’t have it as well off as he is.

Robbie: He talks a little about the soul and the idea of going to heaven – whether it be real heaven or digital heaven. I love that conversation.

Greg: In a nutshell it’s a show about meat, its all about meat.

Nora and Nathan’s character, talk about their roles and complexity?

Andy: Isn’t that the best thing when you are dating someone and you shape them into someone that is perfect for you? That is great, I had a hand in creating Nathan. I also get to see all his memories and there is a scene with my dad where he asks if the reason I like dead Nathan so much is because you’ve seen his memories. That’s partly true. Nora gets a chance to know Nathan first and make judgements. She gets to know Nathan from his point of view.

Robbie: I think one of the really nice thing about the Nora and Nathan relationship is because its not suppose to work. There is no pressure and we are able to become friends and there shouldn’t be a romantic side of things but you can’t deny the chemistry sharing so many experiences. Nathan at the beginning is pretty shallow and self centered and then this happens and he thinks his world is over and then he meets Nora. She has real problems and working her butt off to save her father and there is a perspective shift in Nathan. I think Greg is so good at creating these relationships that feel so real because there are what people go through in life in their own relationships.

What about Nathan’s real life girlfriend?

Robbie: Allegra gets to act a certain way on the show but she is so kind and sweet in real life. Being in the middle of the love triangle I’m very lucky because I have to pretend I don’t like her but she is really so sweet.

Allegra: I think it takes a certain level of adventurous spirit to wiggle into a hug suit. I think it’s better than putting it into practice. It’s difficult to hear and that was one of the most fun but difficult parts of shooting that scene. I had a layer underneath and then foam and then a scuba suit and then goggles and then a skull cap. No, I don’t think I could go the distance but then again we want to be with the ones you love.

Kevin: I have one.

Robbie: I would be the first to try the hug suit and then everyone else can use it.

One of the lines is ‘you have to believe it’s real or you will go insane’ as you tell Nathan, tell us about it?

Kevin: I don’t know if Luke deserves something better, Luke is like a hamster that really digs his cage and instead of just accepting it as is, is trying to get creative with it and find certain ways he can enjoy it all the more. You have Allegra and Andy and Robbie and they have these existential themes and problems and Luke is just the opposite. He is completely rejecting the deeper thought to figure out ways to have earthly pleasures beyond Earth. He has a darker back story and if I can compare him to an animal like a shark that if stops and thinks about it…

Greg: Half shark – half hamster!

Kevin: That would make great fan art and an awesome tattoo. I think Luke if he starts to consider how depressing his life is or how depressing his life is he might implode. It’s like quarantine and who hasn’t picked up sourdough rolls, everyone is trying to distract themselves from the world tumbling around on them. Trying to figure it out one day at a time, trying to figure out where in my cage is a different corner that I haven’t fully explored full of detail or a game.

Zainab: My character has one foot in and out of both worlds. I think that Alisha is kind of thankful for Luke, yes Luke gets on Alisha’s nerves but sometimes you are at the jobs where it gets mundane an what allows the job to be interesting is that you lose yourself in helping your friend, like Nora. I think Alisha kind of needs Luke a bit.

Kevin: What animal combination would Alisha to go against Luke’s shark-hamsters.

Zainab: I think Alisha would be a tiger-bear.

Kevin: That’s not fair, I already gifted you my animals and you pick two formidable beasts that would destroy me.

Zainab: The purpose of this is for me to always defeat you.

Andy: There is a scene in the breakroom where we are talking about Nathan and you tell me to figure it out and I tell you the same. You say, ‘no, I work at…’ listing five other jobs.

Zainab: I’d like to see how she got those jobs and the reasons for those jobs.

Andy: For Nora it’s like this is her job for Alisha its one of her jobs.

Zainab: Nora is very transparent and Alisha, I don’t know what her life is like, it might be chaotic but no one knows. Nora lets it be known that this is all I have.

What’s your favorite piece of tech in the show?

Greg: I want extra fat cartridges in my printer.

Kevin: That can’t be good. I know my printers sucks so the food would be bad.

Allegra: I could go for a self driving car now and then. I don’t want the ethical questions but there are days.

Robbie: I love the memory parlor. It’s one of the most fantastical things in the show. Just being able to live any memory from any time is really sweet and beautiful and something that was off beat from the rest of the show. Not necessarily used that way in the show.

Greg: I have been working on the show for so long and the memory parlor is cool because you can press enhance and the memories are sharper.

Robbie: I think I’ve spent time thinking about this since the show. I look at uploading as the in between because you can still jump in the torrent and still die. Nathan is young and has family and friends and wants to continue in some version of this life.

Greg: Yes, that’s how I look at it too. When it’s an option it will be normalized like a medical treatment to keep persisting in the lives of your family when your body is failing. I think when you are a little kid it is so inconceivable that your consciousness wouldn’t be around so when you go through life and the body changes you realize that maybe your consciousness is the most important in life. I don’t know whether that’s enough but its an option.

Kevin: If the wealthy have everything and removing the fear of death from them isn’t going to make them better people. I don’t know. Also, fear of death removed from society entirely also screws with the grieving process and already do it in social media. It’s already pretty creepy.

Zainab: I think continuing the consciousness is pretty cool but I don’t trust corporations to do the right thing. It’s like when you go to a restaurant and you have to say to please give me a real egg. I can’t say the name of the restaurant

(They all yell TEXT ME!)

Andy: I would upload, I love it, I’m there. It’s the chance to do all the things I didn’t do on Earth.

Zainab: Every upload doesn’t end up in Lakeview.

Season Two, are there answers?

Greg: I kept listening and hearing things that are coming up in season two. We are right in the middle of writing it so I don’t want to get into to may specifics but I think there is going to be a lot more of new tech and we are going to see Nora and Nathan change Lakeview some. A lot of stuff coming up.