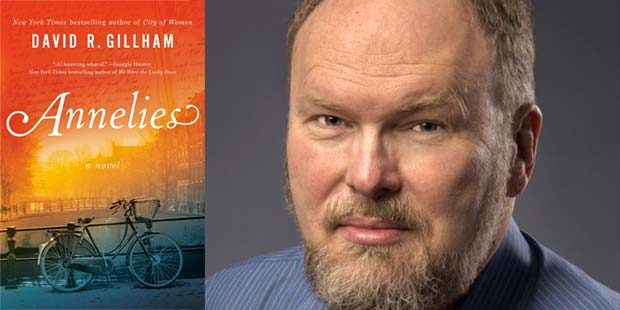 “Annelies” by David R. Gillham has Anne Frank surviving the Holocaust. As the “what if” comes true, the book presents a story of hope, survival, trauma and redemption. But it is also a reminder of what was lost during the Holocaust: How many of those lives taken away had such promise. Gillham gives Anne Frank’s life back to her, a life brutally cut short by the Nazi monsters.

The author explained why he wrote this alternative history, a harrowing undertaking.

“I was constantly aware that Anne Frank was a real person who wrote one of the most defining books of the 20th century,” Gillham said. “I understand she is an icon and have tremendous respect for her legacy. I had Anne survive the Holocaust to give her the life she was cheated of. Through telling the story of one girl, I hope to tell the story of all the ‘Annes,’ showing the lost potential of the millions who perished. Anne Frank’s legacy is one of hope and I want to show what we are missing in our world today, because of their loss. After reading the diary of Anne Frank I became thunderstruck by her insight, perception, humor, and brilliance as a writer. I thought about writing a novel where she survives. After numerous attempts, about 6.5 years ago the story finally emerges with Anne surviving the camps, returning to Amsterdam, and being reunited with her dad, Otto.”

Gillham skillfully transforms Anne from a bright-eyed girl with dreams and ambitions to a bitter, angry teenager who suffers from survivor’s guilt and PTSD. The author should be applauded as he realistically portrays what many Holocaust survivors suffered. Because of enduring the atrocities and emotional/physical pain readers see Anne with a haunted tone that has different ideals. She is not the same person as she was when writing in her diary prior to, during and immediately following the time her family and others were hiding in the space above her father’s workplace. In reading inserts from her diary at the beginning of each chapter people see an optimistic young girl who never gave up hope despite the cruel, unexplainable hatred and danger that threatened her daily.

Anne before the Gestapo capture is written as, “vivacious, precocious, demanding, high energy, charming, fun, a dreamer who could be self-centered. She loved to be the center of attention, a chatter-box, and what you saw is what you get. But afterward, she is angry, guilty, and feels betrayed by everyone including her protectors, and feels like a dislocated soul. Anne is lonely and rebellious. I also had a hard time understanding the psychopathic attitude of the Nazis. At the beginning of Anne’s diary, she refers to the German language as uncivilized. Even at the end of the war they still tried to murder as many Jews as possible. They tried to hide it by blowing up the crematoriums. It is hard to get into the mindset of the Nazis.”

But after being betrayed, the family and their friends were found by the Nazi Gestapo Amsterdam branch. First sent to a concentration camp in Holland with her sister and mother, she was then transferred to the Auschwitz death camp and ended up in the Bergen-Belsen concentration camp in Germany. These scenes show how Anne and her family endured the packed train to the concentration camps, and the despicable conditions of dirt and disease throughout them. It is where the alternate history begins. Unlike the reality where Anne dies of Typhus she is rescued and reunited with her father Otto in Amsterdam. Now 17, she grows from a person filled with frustration, rage, anger and guilt to someone who finally understands she must live her life and honor the dead by using her diary to teach the world about her experiences. Although her father at first would not let go, he eventually allows her to move to America where the last pages show her with a happy ending, one the real-life Anne Frank never had, as she replies to readers notes about her best-selling book, The Secret Annex.

Anne and her dad Otto are at odds. Gillham explains, “They had two different approaches to redemption and trauma. Otto refuses to dwell in the tragedies of the past and looks to a better future. He tells Anne in my book quote, ‘What is the point of having survived? What is the point of living if we are to be poisoned by our own sorrow?’ He refers to their motto of work, love, courage, and hope. He feels that those loved ones who died can be kept alive with love in the survivor’s hearts. But Anne refuses to relinquish these tragedies and faces them with anger and guilt. She believes the guilty deserve punishment and the dead deserve justice. I drew a book quote from survivors who wondered where was God at Bergen-Belsen? Anne feels, ‘The only thing God has given us is death. God has given us the gas chambers. God has given us the crematoria. Those are God’s gifts to us and this.’ She then exposes her forearm with the number A-25063.”

In reading portions of the real-life diary, people understand how Anne had hope amid the darkness of humanity. This novel transports readers as they take Anne’s journey with her to the hiding place, the concentration camps, and as she struggles to survive the aftermath of the Holocaust. Gillham should be given a shout-out for taking on this risky project, but he did it successfully with sensitivity and humility.