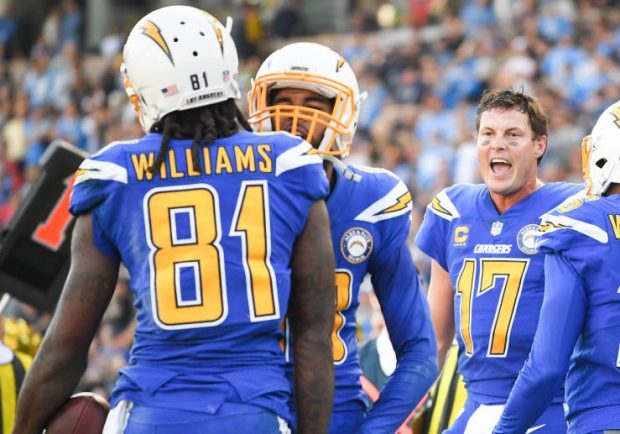 Despite the “Fight for L.A.” motto falling on deaf ears in the Los Angeles market, the Chargers are forging ahead big-time in its effort to establish a competitive fan base before they move into the new LA Stadium in 2020.

With a 29-28 victory over the Chiefs Thursday night, the Chargers are currently riding a four-game winning streak en route to their first playoff berth since 2013. Having won 10 of their past 11 games, Chargers’ players are now getting recognized nationally for their positive play on the field rather than their disastrous special teams execution that has plagued the team the past few seasons.

Since their fourth quarter collapse against the Broncos in week 11, Chargers’ players have been named an AFC Player of the Week since their victory over the Arizona Cardinals Nov. 25.

Following his 28-of-29 for 259 yards and three touchdown performance against the Cardinals, quarterback Philip Rivers was named the AFC Offensive Player of the Week. The 36-year-old Rivers was a perfect 19-for-19 for 187 yards and two touchdowns in the first half.

By completing 25 straight passes, Rivers broke the NFL single-game record — no previous quarterback in league history ever started a game going 25-for-25. It is the 10th honor in Rivers’ illustrious career.

Defensive back/kick/punt returner Desmond King was named AFC Special Teams Player of the Week for his performance in the Chargers’ victory over the Steelers in week 13. King’s 73-yard punt return for a touchdown and the ensuing two-point conversion early in the fourth quarter led to a 23-23 tie to erase a 16-point deficit.

In addition to his touchdown, King garnered 10 tackles and two passes defensed in the secondary. The punt return touchdown was the first of his career and the weekly accolade was the second on the season for King — he was also named AFC Defensive Player of the Week following the Chargers win over the Seahawks in week 9.

Kicker Michael Badgley was named AFC Special Teams Player of the Week following the Chargers’ week 14 victory over the Bengals. Badgley converted a franchise-record 59-yard field goal at the end of the first half, topping Nate Kaeding’s previous mark of 57 yards set in 2008.

Badgely was a perfect 4-for-4 on the day in field goals, also connecting on kicks from 31, 32 and 45 yards. The weekly award was the first of Badgely’s career and marked the third straight week a Chargers player won that award.

Following his performance over the Chiefs Thursday night, second-year receiver Michael Williams couldn’t pick a better scenario for his coming out party to silence any critics who still questioned his status as a top 10 draft pick.

Having missed most of his rookie season due to a back injury, Williams showed everyone watching the nationally televised game why the Chargers selected him the seventh pick overall in the 2017 NFL Draft.

Entering the game without their top two running backs in Melvin Gordon and Austin Ekeler, when Pro Bowl receiver Keenan Allen went down in the first quarter with a hip injury it appeared the game could quickly get out of hand with the Chiefs taking an early 14-0 lead.

However, Williams took the proverbial ‘next man up’ by the horns and proved he has the athleticism and skills to someday be a game-changer on par with some of the great Chargers receivers of the past like Lance Alworth, John Jefferson, Wes Chandler, Charlie Joiner and Anthony Miller.

Setting career-highs in receptions (7), receiving yards (76) and touchdowns (3), Williams certainly the spark that ignited the stirring 29-28 comeback win over the Chiefs. His 19-yard touchdown was the first rushing score of his career and his 10th touchdown of the year, becoming the first Chargers wide receiver to have double-digit touchdowns since Tony Martin had 14 in 1996.

When asked to comment about the height advantage his receivers had over theChiefs’ defensive backs, Rivers raved about the year Williams is having, “Especially this guy (Williams),” Rivers said during the TNF post game show. “I mean the man has caught nine touchdowns this year and this two-point conversion … nobody in the locker room doubted why he was picked seventh, but if anybody had any questions, he’s answered those this season.”

With his performance, Williams could very well be named Player of the Week and become the fourth Chargers’ player to earn that award in consecutive weeks.

The Endzone: As a result of  his performance Thursday night, Williams’ 10 touchdowns now ranks fourth in the NFL in total touchdowns for a wideout trailing only Antonio Brown, Tyreek Hill and Davante Adams, who all have 12. Prior to the Chargers victory over the Chiefs on Thursday night, PFT (Pro Football Talk) released its NFL Power Rankings following week 14 and had the Chargers ranked No. 4 behind the Rams, Saints and Chiefs, respectively. Here is the list of its top five teams and a comment from PFT on each team.

3. Rams (11-2; No. 1): They should be very happy that this year’s Super Bowl isn’t being played outdoors in a cold-weather city.

4. Chargers (10-3; No. 5): If you haven’t been paying attention to the Chargers, you may be in for a surprise on Thursday night.