COMIC-CON — Diary of a Mad Journalist, Day One 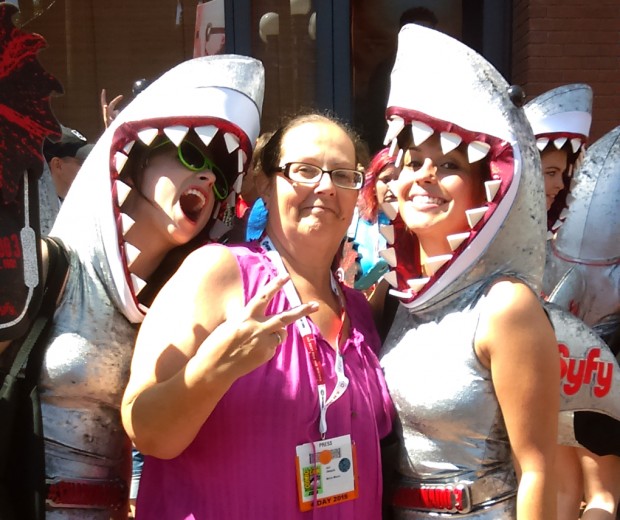 Yes folks, it is that time of year when downtown San Diego becomes the place to be for all things comic book, film, television, characters and events as San Diego Comic-Con arrives once again.

I have been covering Comic-Con for many, many years now — usually all from inside Hall H.

This year, well, this year I’m going rogue! Although I will still be covering events and panels from film and television, I am venturing outside for the first time ever.

Yes, that means Movie Maven is going to become a kid and see what the streets of our fair city are up to!

It all begins Wednesday for Preview Night, and for everyone attending it means a glimpse into the middle of the Convention Center where there is so much to take in it can seem a tad daunting. Never fear — take a deep breath and dive into all things fun.

Comic books, collectables, posters, buttons (which are a thing of mine), interactive booths, photos to be taken, statues, toys, t-shirts, autographs and so much more are at every turn. It is immediately clear why the bags handed out earlier are necessary (but I always suggest bringing one from home too!).

It is a place where people connect and talk about their favorite super heroes or the one thing they hope to get. It is also a place for people to reconnect, as I do, with those who have come far and wide for this one event each year.

Also during preview night, attendees get a sneak peek and screening of pilot episodes for television. This year “Supergirl,” which will air on CBS in November, starts off the evening. Kara Zor-El escaped from Krypton the same time as Kal-El but became lost in the Phantom Zone. Arriving on Earth she grows up knowing that something is quite different about her.

NBC shares its pilot for the series “Blindspot,” which tells the story of Jane Doe who is found in a bag in Times Square covered in mysterious tattoos. Along with FBI agent Kurt Weller, they must discover what it all means as secrets are uncovered that could change the world.

“Containment” begins with a mysterious epidemic that hits Atlanta and now the fight for life begins. Society could be more fatal than the infection! “Lucifer” on Fox is a fallen angel who is bored being the Lord of Hell so he retired to Los Angeles. Now he runs a piano bar and when a pop star is murdered — something stirs in him!

“Teen Titans Go!” brings new adventures, so prepare to screen a brand new episode based on the DC Comic characters. Fans of animation know this is a good one to see.

So, for the next four days make sure the tennis shoes are comfy ones, dress accordingly (remember that it may be hot outside but always cool inside), bring chapstick, don’t forget a hat, take a snack or two along with plenty of water, map out your goals the night before, remember parking can range from $1 an hour, to $10 for 8 hours to $40 per day (no, I’m not joking). Be prepared to stand in lines, make sure all your devices are properly charges as sockets are few and far between and most of all…

…be kind to one another. Remember that there are a lot of people trying to have fun like you are so smile a lot, be helpful to those who need it and most of all remember that this is suppose to be an amazing experience and it starts with a positive attitude. Wait…did I just sound like a cat poster (she says in a Morgan Freeman “Lego Movie” voice).

Have a great time everyone and don’t hesitate to say hello if you see me acting like a kid, you never know, I may ask you to join me!