Naval Ammunition Depot in Arkansas. It was the easiest duty I’d ever seen or heard of the Marine Corps. To begin with, I worked only one day out of seven as the Sergeant of the Guard. I would ensure all the Marine sentries on my watch were squared away and carrying on their duties. Because it was a small contingent, my time was split between checking on the guards and monitoring the radio in the guard house. When I was off duty, I had open gate liberty. That means I could come and go as I pleased, which I did.

Working a no-pressure job with plenty of time off allowed me the luxury of sorting out my feelings about what I saw and did during the Korean War. I believe it prevented me from entering that dark place so many combat veterans have been lost in.

FROM YOUR ENTIRE SERVICE CAREER WHAT PARTICULAR MEMORY STANDS OUT?

When I was in Korea, my company commander, Capt. Charlie Mize and I grew pretty close. We saw a lot of combat together and spent some quality time talking about home when were not fighting for our lives. He was a good officer who took care of his men. I respected him greatly.

Sometime around 1990, I was glancing through a VFW magazine and came across a notice of someone named Tex Downs who was looking for people from Gulf Company, 3rd Battalion, 5th Marines during the Korean War. I wrote him telling him about my time in the company and how Charlie Mize was my company commander. It turned out Tex Downs was a platoon leader I didn’t know who had served in the company after I left Korea. He sent me a picture of him, Charlie and a few other officers and gave me Charlie Mize’s address. I also learned from Tex that Charlie had retired as a Major General and at one time commanded the 1st Marine Division.

I send a letter to Charlie and wondered if he would respond or not. When I told my ex-wife and her husband I had written the letter, they both said he would never answer me back. He was after all a general who had tens of thousands of men under his command throughout his career and I was just a sergeant he would never remember.

Five or six days later, I got a letter from him and a command photo of him as a Major General. He wrote he remembered me very well and was glad I was doing good. General Mize died in 1997 at the age of 77.

WERE ANY OF THE MEDALS OR AWARDS YOU RECEIVED FOR VALOR? IF YES, COULD YOU DESCRIBE HOW THIS WAS EARNED? 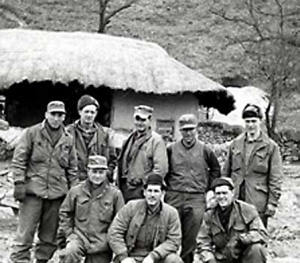 After capturing Kimpo airfield midway between Inchon to Seoul, our battalion moved out toward the Han River. By this time I was a fire team leader. Our platoon was on the left flank, moving through steep hills and open land. My squad was on point and we’d been told to expect seasoned North Korean soldiers determined to stop our advance.

As we came over the crest of a hill, all hell broke loose. We were immediately pinned down by heavy small-arms and automatic weapons fire. Our squad leader, R.L. Clark, and I were laying close to each other as bullets whined overhead, others digging into the ground around us. Clark carefully peeked over the hill, took out his binoculars and raised them to his eyes hoping to get a better view of the enemy situation. He no longer got the binoculars up when a single bullet tore through the left lens. He died instantly. I was enraged. I wanted to kill whoever it was that had killed Clark.

I began crawling forward toward the enemy position. I looked back to see who was with me only to discover I was all alone. The rest of the squad was still behind the hill. Made no difference to me. I was on a mission to kill as many North Koreans as I could, with or without help, figuring the one who killed Clark would be among them. I crawled up to a slight rise and saw enemy fox holes connected by a four-foot deep trench. I inched my way behind them and opened fire with my M1 Rifle, stopping only to throw a couple of hand grenades and to reload my rifle. The enemy were falling like bowling pins. That’s when my fire team caught up with me and together, we starting firing down the line of fox holes. Within minutes the enemy was destroyed.

For this action I was awarded the Silver Star Medal.

Cont. OF THE MEDALS, AWARDS AND QUALIFICATION BADGES OR DEVICES YOU RECEIVED, WHAT IS THE MOST MEANINGFUL TO YOU AND WHY?