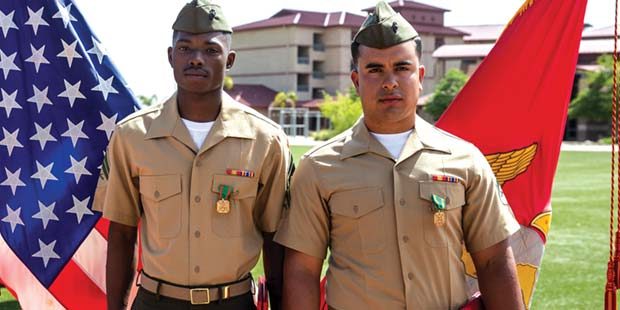 CAMP PENDLETON — Courage is the mental, physical and moral strength to persevere and withstand danger, fear or difficulty. It is the heart of the core values instilled in every United States Marine and is what defines their character and warrior spirit.

It is with this courage that Marines with 1st Combat Engineer Battalion, 1st Marine Division were able to do what is right and necessary when they were faced with critical challenges throughout this past year. In the last 12 months, nine Marines from 1st CEB saved the lives of three people in completely separate events in our community.

Capt. Andrew Cruz was celebrating his wedding night in Maryland on July 14, 2018. During the ceremony, he heard a car crash on the road outside. Without hesitation, he ran toward the commotion where an SUV had flipped on its side, trapping the woman who was driving it.

Cruz climbed on top of the vehicle and broke the window with his elbow to get to the driver and provide the necessary care until medical professionals arrived. His heroic instinct and Marine Corps training were crucial factors in the rescue, and ultimately, the survival of the woman involved in the crash.

Just four months after Capt. Cruz saved a woman on his wedding day, six Marines from 1st CEB rescued an injured motorcyclist when returning from a camping trip in Big Bear. During their drive through the rolling mountains of Southern California, Sgt. Devon Espinoza, Sgt. Kyle Henne, Cpl. Mark Dass, Cpl. Alex Koeneke, Cpl. Alec Leonard, and Cpl. Jay Wehrenberg came across the motorcyclist on the side of the road. Other cars drove past the wounded man but the Marines knew they could help.

They immediately pulled over and began assessing the rider’s injuries, applying a tourniquet to his lacerated leg and calling first responders. Once the medical professionals arrived, the Marines stayed on the scene and helped direct traffic.

“I am honored that my actions helped someone as much they did. It was a humbling experience to be recognized by so many people, and it really puts into perspective how quickly a situation can change, and as a Marine, you have to be ready for it,” Koeneke said.

While these Marines created a reputation of protecting the innocent people in our community, other Marines from 1st CEB were on base ensuring the safety of their fellow Marines.

Cpl. Renzel Craft and Cpl. Everton Porto were attending Corporal’s Course on Marine Corps Base Camp Pendleton on April 4 when they joined their fellow Marines in the chow hall. Upon sitting down to eat, they realized a Marine across from them had fallen to the ground face first and his body began to seize up. Immediately, Craft and Porto rushed to his side to assess the situation and stabilize his body to prevent further injury.

“We made sure he didn’t swallow his tongue, we rubbed his sternum to keep him awake, asked him relevant questions to check for concussions, and checked for bleeding around his head and mouth,” Porto said.

Corpsmen arrived on the scene, and provided aid to the Marine. Upon further examination, the corpsmen determined the Marine needed to be brought to a medical facility. Craft loaded him into his personal vehicle and drove him to the local Battalion Aid Station to receive additional treatment.

“I was able to help a Marine get the adequate care he needed by being proactive about the situation,” Craft said. “To those Marines who witness an accident, I can’t stress enough the importance of keeping a clear mind, and always paying attention to the Marines to your left and right. That doesn’t mean just medically, but mentally, physically, financially, or in whatever case it may be, just take care of your Marines.”

The Marines who came to the rescue in each of these events are part of 1st Combat Engineer Battalion. Some might credit the Marines’ fearless nature to the demanding operational training the battalion performs throughout the year. While the intense training certainly enabled these Marines to perform the live-saving techniques they were taught, perhaps the credit can more rightly be attributed to the familial bond of the battalion that generates the mentality of always taking care of the person next to you no matter what. Without this mentality, the Marines’ may not have felt compelled to save the lives of complete strangers.