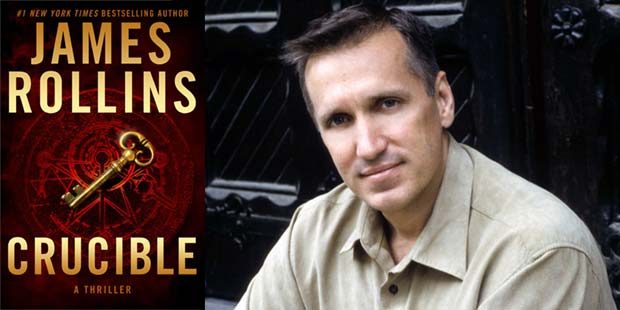 “Crucible” by James Rollins reunites the Sigma Force team in this thrilling story. Released just after the holidays, this plot is anything but merry. But readers of Rollins are used to a roller coaster ride where they get plenty of action blended with cutting edge science, historical mystery and the latest technologies.

“It has been on my mind for awhile to write a story surrounding artificial intelligence,” Rollins said. “I made sure to read the contrary view that question if AI is a threat. There are certain hurdles that will need to be crossed to bring about a self-aware human-like AI. Their position is that this technology will happen. Of those two dozen experts I interviewed, the consensus is that it will happen in five to ten years because of the rapid advances. Two of the researchers thought we have already gone there. It is not an if, but a when. I use as an example, the story of AlphaGo, the first computer program to defeat a human. It played the board game, Go. The next generation self-taught itself in three days and also beat his big brother, the original version of the program. I think this book is written for the non-believers.”

It is Christmas Eve where the Sigma Force friends are gathering to have a joyous holiday. But Monk Kokkalis and Gray Pierce find their holiday spirits quickly dampened after returning to Monk’s house in Maryland. The Christmas Tree is toppled, Kat, the computer expert of the group, is lying unconscious on the kitchen floor, and Monk’s two young girls have been kidnapped, along with Gray’s pregnant wife, Seichan. This happened shortly after a massacre in Portugal where five women scientists have been brutally massacred. Also missing is Mara Silviera who was making advances in artificial intelligence research. She is on the run, protecting herself and her computer’s life. Gray, Monk, and company set out to find Mara after realizing that she is the key to finding their loved ones and also to saving humanity.

“Eve, the computer, matured from a narrow AI to AGI then eventually to ASI,” Rollins said. “I based her on the book ‘Flowers for Algernon’ that was made into the movie ‘Charley.’ Over the course of time his vocabulary increases multifold. He surpasses intellectually the average person’s language. There is math on one of the pages of my book to show how Eve goes beyond scientifically the human understanding, just as Charley had done in the movie. I gave her a double personality where she is split between dark and light. The one cared for by Mara nurtures and protects humans, while the other one, which was stolen, mirrors the torture done to her. Currently, we are in narrow AI such as Siri or self-driving cars. What everyone is pursuing is AGI that have computers self-aware of themselves with some human level of intelligence that can differentiate. ASI will advance far beyond our intelligence and accelerates rapidly. I wanted Eve to start with a cold and calculating intelligence and then mature as she is trained in different types of environments.”

The action keeps moving at a brisk pace in this latest novel that is crafted around plausible scientific data. Rollins has a knack for weaving together new and old as well as warning readers what can happen in the not too distant future.