Does this scare you? 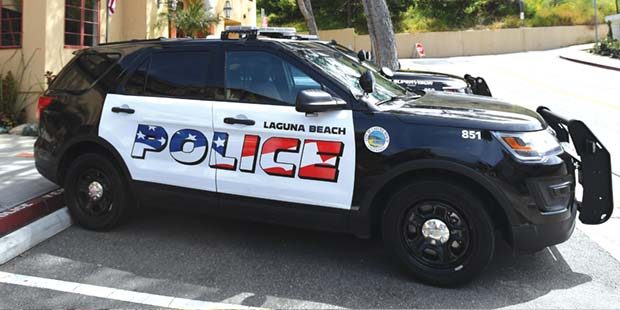 Some community members expressed shock and concern at the aggressive logo on the new police vehicles, which features a prominent American flag graphic. The word “police” on the sides of each vehicle is painted in an Old Glory-inspired red, white and blue design.

One local citizen, a designer that had nothing to do with the police cars, observed a group of immigrants upon seeing the patrol cars scatter about like a bunch mice fearful of being caught by a SWAT team of police and police cars. At the March 19 City Council meeting several Laguna Beach residents spoke up about their resistance to the new design. A local woman artist said it was “shocking to see the boldness of the design,” which she said “felt very aggressive.”

Apparently now the sight of the American flag is so aggressive it strikes fear in the hearts of immigrants. Please.

She didn’t realize that she would be stepping on a political landmine. The impetus for that landmine was “a vocal minority of political activists,” extremists, “that initially fought the new black-and-white design for police vehicles.” When they lost that battle, they went after the Stars & Stripes. They even went to the American Legion to determine if it was disrespectful for the flag to be chopped up (within the letters).

Attorney Jennifer Welsh Zeiter called the decorated Ford Explorers exceptional at the City Council meeting, and said that those who vocally opposed the design are so filled with hatred toward the president of the United States that they cannot see through their current biases to realize that a police vehicle with an American flag is the ultimate American expression.

Why is it that the left-wingers think it’s A-O.K. to let illegal and legal immigrants hoist the flags of Mexico Honduras, Guatemala, El Salvador and Nicaragua? This type of display clearly indicates that the immigrants of these countries clearly refuse to assimilate. Some immigrants want the material comfort and the security that the United States provides but not necessarily its way of life.

Many people think the tradition of assimilating immigrants into society is solely an American thing, something that is not practiced in European nations. Take France as an example. So far that country’s elites decided to indulge in self-defeating ennui (boredom) and gave up on assimilation. They now realize that the terrorists that have run amok, killed and murdered French men women and children, were French born and raised and showed a higher price the nation has paid for abandoning assimilation.

The Laguna Beach police cars mean so much more than just police cars — they represent the love and allegiance people living in the greatest country in the world must have to protect our freedoms and way of life.

Part of his promise was to clean out the swamp, and it appears he’s taking no prisoners. He refuses to apologize for America’s greatness and realizes we must keep America great forever!

The Laguna Beach City Council voted this past week to keep the American flag design on city police cars. At least 200 people packed the council chambers where police officers guarded the doors. Many in attendance wore combinations of red, white and blue. Some donned veterans or American Legion hats and a few more wore make America great again hats!