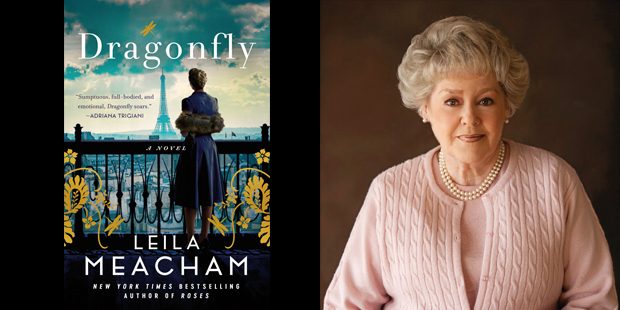 Dragonfly by Leila Meacham is a spellbinding novel.  The story from the very first line pulls readers into the mystery: which of the five American spies embedded in Nazi occupied Paris has survived? The dramatic scenes are riveting as each character plays a cat and mouse game with the Nazis.

The code name “Dragonfly” came about when Meacham saw “on my end table was a little box and on the top lid was a dragonfly.  There was also an inscription, which I used in the book, “The sun on the hill forgot to die, and the lilies revived, and the dragonfly came back to dream on the river.” It is a great translation for the reality of the plot.  The French did not die and the spies that lived went back to the river to reunite eighteen years later. I had one of my characters, Brad, point out that Dragonflies are almost impossible to snare and have no blind spots.  Their eyes wrap around their heads like a football helmet to give them a three-hundred-sixty-degree view.  Dragonflies have no vulnerable areas and can see all around. They are natural escape artists. Dragonflies do not track their prey.  They would calculate the insect’s location, direction, and speed, then lay in wait in their prey’s flight path for the chow to fly right into their mouths.  Similarly, the team of spies would be inserted directly into the enemy’s line of sight without the target being aware of their presence.”

In 1942, Americans Brad, Bridgette, Bucky, Chris, and Victoria have been recruited as spies for the CIA’s Office of Special Services.  They are recruited for their skills, but also have a personal agenda.  The two women and three men are from very different backgrounds: Texan athlete with German roots, an upper-crust son of a French mother and a wealthy businessman, a dirt-poor Midwestern fly fisherman, an orphaned fashion designer, and a ravishingly beautiful female fencer. Each is assigned a new identity as well as a code name.( It seems like a lot to keep track of, but there’s a cast of characters at the beginning of the book and Meacham does a great job intertwining all the names throughout the story.) The team is code-named “Dragonfly,” and upon arrival in Paris, the group disperses and sets about to fulfill their individual missions while also pursuing their own agendas. Not allowed to share their identity it was planned that they would meet on a certain date in a certain place at a certain time after the war.

An added bonus is how their cover stories offer surprising glimpses of daily life for the French and their German occupiers. Vividly portrayed is the treachery in German-occupied Paris that constantly existed for those working to remove Hitler and the Nazis. This includes those Germans plotting against Hitler as they extricate others from his machine in the hope of saving Germany.

“I wrote in the book how Hitler ordered 16,000 Jews murdered at Pinsk in the Soviet Union, and how SS troops locked 200 Polish Jews into a synagogue and set it afire. I also wrote how Hitler expected the German youth to be physically strong and if not they were basically tortured, such as water dunking, beatings, and the requirement that the student stand on his toes with arms outstretched for an unendurable length of time. My character, German Major General Konrad March was horrified when he learned of these.”

Furthermore, “I pointed out that the Nazis were against celebrating the Christmas holiday. One of my characters, General March, was also horrified as he described how German soldiers were ordered by Hitler to pass out posters that forbade any display of the Christian elements.  Shops were ordered to replace their Christmas toys with tanks, fighter planes, and machine guns.  The star on top of the Christmas tree was to be replaced with a swastika. They emphasized that Christmas was not about the coming of Jesus, but the coming of Hitler who they are to consider the real savior of the world. Such a nasty regime.

This clever, suspenseful, and character-driven plot is not the typical espionage story.  It is uplifting and shows the close bond where each spy considered the others in the team part of their family. The novel takes readers on a journey with the characters as they attempt to navigate and defeat the Nazi regime. This story is as compelling and riveting a novel as Kristin Hannah’s The Nightingale.