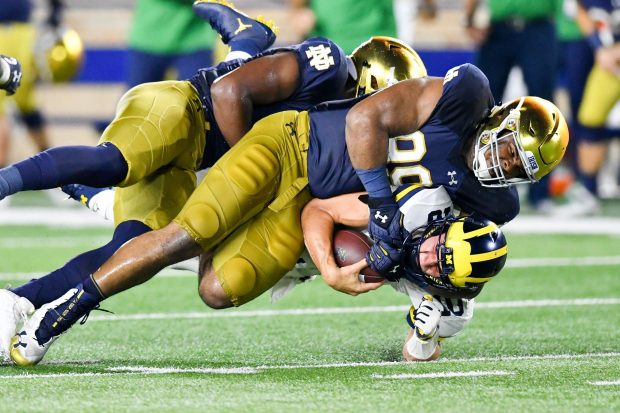 For the second consecutive year, the Chargers addressed immediate needs on the defensive side of the ball in the draft. Looking to fill voids at defensive tackle, safety and linebacker, General Manager Tom Telesco used five of his seven picks shoring up the defense. Despite using their first four picks on defense in 2018, it was clear a serious upgrade was needed following their blowout loss to the Patriots in the playoffs.

Although one cannot truly judge a draft class for at least two or three years after the players get acclimated to the NFL, many analysts assign a letter grade immediately following the draft based on their own player evaluations.

In this article we will focus on the grades Chad Reuter, Pro Football Focus (PFF), Reuters News Group and Mel Kiper Jr. gave the Chargers.

Draft analysis: “The Chargers ignored needs at offensive tackle and in the secondary to address the need at DT in Round 1. Tillery is a load when allowed to get upfield, especially when he keeps his hips low to push through blocks. They were apparently not as worried as some teams about the shoulder surgery the tackle had before the draft.

“Adderley is a versatile cover free-safety prospect who can replace the released Jahleel Addae and will complement Derwin James quite well. Pipkins is a project player who has potential as an offensive tackle but was picked a round or two early because they felt the need to find one before Day 3.

“I projected Stick to go to the Chargers in the sixth round, but they jumped on him a round earlier to compete with Tyrod Taylor and Cardale Jones for a roster spot. Tranquill meets a need at linebacker, and Broughton is an active interior defender.”

Day 1: “No man loved Notre Dame’s Jerry Tillery as much as our very own Mike Renner. The long, athletic defensive interior was knocked in the pre-draft process because he has interests outside of football – which still doesn’t make a ton of sense – but Renner didn’t factor in Tillery’s love for reading or traveling into his evaluation. Shocking some, he kept his eyes on the film, advanced statistical production and the grading.

“The Bolts got another PFF favorite for a very cheap price, stealing Derwin James at pick No. 17 a year ago and Tillery at No. 28 this year.”

Day 2: “Delaware safety Nasir Adderley received a first-round grade from PFF this offseason. The small-school product lit up the Senior Bowl. He also earned a 90.3 overall grade with Delaware a year ago, and his 89.9 2018 coverage grades led all draft-eligible safeties.

Day 3: “Scooping up former Notre Dame off-ball linebacker Drue Tranquill at pick No. 130, Los Angeles made yet another value pick at the top of Day 3. Tranquill is a former safety turned linebacker with great athleticism and all the intangibles teams normally fall in love with when scouting linebackers. He has been one of the best coverage linebackers in college football over the past couple seasons after earning an 83.3 coverage grade in 2018 and 90.1 in 2017.

Emeke Egbule, PFF’s No. 212 overall player in the class, is a solid pass-rushing off-ball linebacker coming out of Houston. He earned an impressive 76.4 pass-rush grade and totaled 22 total pressures this past season.

“Cincinnati’s Cortez Broughton, a favorite of PFF’s Andrew Russell, is a sneaky good pick to take before the frenzy for undrafted free agents starts. During his career at Cincinnati (2014-2018), Broughton racked up 94 quarterback pressures and 98 defensive stops by putting all of his power into a vicious first step. He can apply interior pressure on any down, and he can clear lanes in an instant. Against the run, Broughton was just as efficient. He never fell outside of the top 10 among qualified AAC interior defenders during his final three seasons, posting a run-defense grade over 80.0 each year.”

Reuters news group gave the Chargers an overall grade of B for their picks. Per Reuters Field Level Media, “The Chargers didn’t trade at all, keeping all of their original picks, but they did quite well. Tillery was a reach on some boards, but Adderley’s value at the end of Round 2 more than makes up for it. Pipkins is a project but could be a great tackle in time, and Tranquill has been effective when healthy. Taking a flier on Stick to develop behind Philip Rivers also makes sense.

“Best pick: Adderley provides not only great value — some pegged him as a late first-rounder — but also a perfect complement to Derwin James. Adderley can patrol center field in Gus Bradley’s Cover-3 scheme while James prowls underneath, and both are versatile enough to interchange at times.

“Upside pick: Tillery’s motor runs hot and cold — not just snap-to-snap but game-to-game — but his combination of length and athleticism is rare. His off-field character has drawn rave reviews, leading many to believe he’ll become a star with proper coaching.”

The Endzone: ESPN Draft Analyst Mel Kiper Jr. wasn’t as high on the Chargers draft picks as other pundits, giving them an overall grade of C+.

“The Chargers made the playoffs last season, their first appearance since 2013, and a big part of their defensive resurgence can be traced back to 2018 first-round pick Derwin James,” Kiper said. “He solidified all areas of the defense, as L.A. ranked ninth in the league against both the run (105.8 YPG allowed) and pass (227.9). GM Tom Telesco — who has had a really good run of first-round picks, with four of his last five making Pro Bowl teams — obviously hopes his first pick in 2019 does the same.

“The Chargers were gashed up the middle in the playoff loss to New England, and defensive tackle was a clear need this weekend. So while I see exactly why they took Jerry Tillery at No. 28, my only objection is over the value of where it took him. He is the very definition of a boom-or-bust prospect. I watched every one of his games at Notre Dame, and there was a lot of up-and-down play. He had eight sacks last season, yes, but four came in a dominant performance at Stanford. Why can’t he dominate on a consistent basis? I ranked him No. 56 overall on my board.

“I did like Telesco’s second pick, safety Nasir Adderley (No. 60). He complements James’ skill set well as a ball hawk who can play the deep middle of the field as well as any safety in this class. Trey Pipkins (No. 91) was a reach on my board at the end of the third round; he snuck onto my final top 300 at No. 299. The Chargers were decimated at linebacker at the end of the last season, so Drue Tranquill (No. 130) is a decent depth option. Easton Stick (No. 166) isn’t going to be Carson Wentz, but if he’s a serviceable backup, that’s fine in Round 5.

“Adderley should be an immediate starter, and Telesco will hope that Tillery doesn’t miss time due to his torn labrum. If Tillery plugs the leaky middle of the defense, the Chargers will be thrilled.”