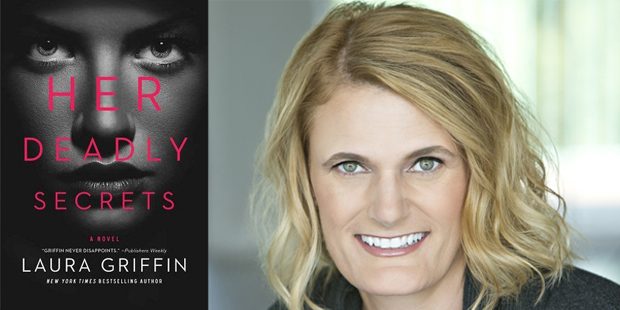 Her Deadly Secrets by Laura Griffin has plenty of action and suspense with a touch of romance.  Readers are easily drawn into the investigation of this murder mystery that involves the mob and a surprise villain.

The setting of Houston adds to the intensity of the story. “I put the story in Houston, where I grew up.  Because I had an internship with a law firm there, I had a feel for the place and could describe the behind the scenes stuff. This is a place I know and love. Since Houston is so hot in the summer, everyone takes the tunnels.  Wearing business attire and high heels anyone going out in the heat would be soaking wet so everyone takes the tunnels.  They are elaborate with many stores and restaurants.  It connects all the downtown major buildings.”

The plot starts out with a bang, literally.  The heroine, Kira Vance, a private investigator, arrives to a meeting with her boss/mentor, Ollie Kovack, and the lead defense attorney Brock Logan. Unfortunately, she finds herself in the wrong place at the wrong time. Shortly after arriving, she witnesses the murder of Ollie and the attempted murder of Logan. Because the trial will not be postponed, Logan asks Kira to take over the case. She finds that Ollie has unearthed relevant information that might throw doubt on the person up for murder. Kira is now more determined to find out who killed Ollie and are they related to the possible new suspect.

Wolfe Securities is hired by Logan to protect all the defense team because of the possible dangers. Knowing this protection will hamper her ability to investigate Kira agrees to it with limitations. She allows Jeremy Owen, a former Marine, who is assigned to dutifully protect her, to be covertly present. As they work together to solve the case of her co-worker Ollie’s murder, both learn to respect what the other does.

The other female protagonist is Detective Charlotte Spears.  She trusts her instincts when it comes to her job and people, which included following leads offered by Kira.  She’s tough, no-nonsense and clever. Dedicated to her job, she’s a terrific investigator and someone who weighs the clues carefully.  Griffin shows the different points of view between the detective and a private investigator. Readers see the diverse sides of the investigation as well as how the two women came to an understanding in regards to sharing information each considered confidential from the other.

Kira is written as intelligent, independent yet a vulnerable young woman, doggedly determined, highly astute and a quick learner.  She is sassy and tough.  This is directly in contrast to Jeremy who is the silent type, appears grumpy, and is very intense. “When I wrote the heroine and hero I decided to contrast their personalities. Kira is underestimated because of her being petite.  Kira flies under the radar, and literally can slip into and out of places because she is good in blending in.  She uses that to her advantage when investigating.  Very resourceful, outspoken, driven, headstrong, and is hard to pin down.  On the other hand, Jeremy is very protective, focused, disciplined, controlled, and quiet.  He hides his emotions.”

Griffin is able to create female characters who are capable, intimidating and uncompromising.  She contrasts them with the male lead who are tough yet very placid. Her stories never disappoint. The problem with finishing one of her books is that readers will long for a new story right away.