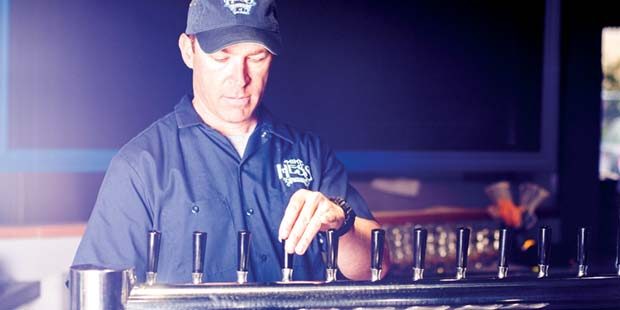 A local brewery has teamed up with a veterans support nonprofit to release a new beer, with a portion of the proceeds going toward retrofitting homes for wounded warriors.

Guns To Hammers is a veterans support 501c3 nonprofit whose sole mission is to come to the aid of our disabled veterans who come home from their tours of duty less than when they left. Guns To Hammers provides the necessary remodeling ADA work for veterans after they return to their homes and attempt to move forward with their lives — all at no cost to the Veteran.

“We provide the much-needed adjustments such as wheelchair ramps, wider doorways, ADA compliant bathrooms and even kitchens if it’s needed,” Guns To Hammers CEO JR Smith says. “We do this work because the VA continually fails our veterans, and it’s not right. Most of our projects fall into the $10,000 to $60,000 range. Those costs are mostly dependent on the location of the project in the nation and the needs of the veteran.”

Already, GTH has partnered up with more than a dozen craft breweries coast to coast that are making a GTH Veterans Ale. Every brewery is making something different, but the bottom line is — GTH receives a dollar or two for each glass sold that goes directly to the cost for the remodeling of a veteran’s home.

Joining in the fun on the evening will be one of San Diego’s favorite bands, The Nowhere Men, who will go on stage at 6 p.m. I am told there will be several special guests that evening as a surprise.

“We are really honored to be partnering up with the veteran support group Guns To Hammers construction,” says Mike Hess. “As their official SD brewery, we are launching our very own Guns to Hammers IPA at all MHB locations.

“As a veteran-owned business, we are thankful for a way to give back and help in a real, tangible way,” Hess added. “Some of the proceeds from the sale of GTH IPA will be directly contributed to the modifications of homes of disabled vets — and the first $10,000 that we raise through this beer’s sale will go to a local vet’s home.

“I couldn’t be more excited to team up with Mike Hess Brewing on this endeavor,” Smith said. “First off, as a former lieutenant commander in our Navy, Mike gets it, he understands the initiative and the sense of urgency behind it. Secondly, he runs a world-class operation. Behind the scenes, he uses the most modern, up-to-date and state-of-the-art equipment money can buy, enabling him to consistently produce high-quality beer.

“And third — and probably the most important — his beer is superb. Mike is a perfect fit for us at GTH, and we are honored that he chose our foundation as his conduit to give back to our veterans in need.”

In June, while on their 2018 National Tour, GTH announced that they have teamed up with the San Diego nonprofit NOLAH to provide a much-needed kitchen remodel for a disabled veteran. This project will be the recipient of the first $10,000 raised by the Mike Hess Brewing Guns To Hammers IPA.

Mike Hess Brewing will continuously offer a Guns To Hammers IPA tap at all three San Diego locations, so if you are unable to make it to the tap event, you can still try this tasty IPA on your next visit.

For more information about Mike Hess Brewing and its current line-up of beers, you can check out the brewery’s website at www.mikehessbrewing.com or visit its Facebook page. Guns To Hammers can be found at www.gunstohammers.com and, of course, you can visit the nonprofit’s Facebook page for more updated information about current projects across the nation. Don’t forget to give them a like, follow and a share.