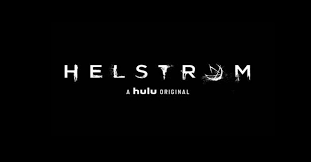 This is a sneak peek into Hulu’s terror filled comic to come life with Hulu’s Original horror of HELSTROM.

Paul: Given the events that are happening in the real world today I would think we would be a little remiss in talking about them since our show is about good and evil and right and wrong and the trauma of our past. We are suppose to be doing a show about horror but its not real horror. I am a writer who’s job it is to have empathy and a human being who has a conscious and adding my voice to all the other voices out there that are deeply saddened by the state of our country out there.

Where there any moments that creeped you out?

Sydney: There was one location, the hospital, that creeped me out. Spooky signs and words on the dusty floor.

Elizbeth: It is totally, straight up haunted. Just the energy, the moment you cross the threshold, you feel it. Then when I do crazy voice.

Ariana: Every time I had to work with Beth I was so scared.

Elizabeth: Two security guys had to come into the cast test because they thought I was a bear. It was my vocal horror.

Paul: It started a few years back bringing a darker tone to the Marvel universe on t.v. and looking at the horror side. Helstrom was one of them that I enjoyed and I gravitated to. This story of this brother, sister and mother – based on the book Son of Satan – and we’ve grounded it more on the real world. Originally, there is this one specific panel and a panel is Daimon Helstrom in a full on red cape and pentagram on his chest and he’s in his mother’s library. She has just passed and he’s reading her diary and tears are streaming down his face. I saw that and said that’s all I need to know in that panel. Even though there is fire, it was rooted in emotions. I gravitated toward that and that’s what pulled me into it.

Its not just one persons story.

Paul: It’s a family story, not just Daimon and Ana and their Mom. Its about an extended family. Its about the family we are born with and the family we create. It’s the stuff we are born with genetically that we carry with us because we have to. It’s about our environment, its about how we were raised and who raised us and the values we are imprinted with as we grow older. That gives us the ability to know right from wrong, there are decisions and consequences. There are decisions made for you and the decisions you make. So this extended family we have built here, this cast here is a reflection of that. It’s about all these characters being part of the family dealing with their own personal demons and relate to one another.

Tom: I think it is interesting touching on what Paul was saying before about the relationship between Daimon and Ana. They care the closest family members on the show yet they are far apart with new families in their new lives. We get to see how they operate in their own worlds. When they do come back together, we get to see how they try and kind of meet each other again as adults and victims of childhood trauma that they dealt with in different ways. When Syd and I were working together to try and navigate it all, it’s a really interesting messed up really dangerous and vulnerable dynamic for both of them.

Sydney: I’m not quite sure what you were talking about. To piggy back off that, its true. I think Ana and Daimon as with every character in our story, they are plagued by their history. Ana is someone who is characterized by what she has overcome and responded to the trauma and the crap that has come flying at her. Ana and Daimon are different and they respond different to these things but similar in that at the end of the day they want the same thing – safety and love. They go about it in different ways.

Tom: They can do things other people can’t do.

What were your favorite powers?

Sydney: How much can I say Paul?

Paul: Lets just say they have different abilities and if you do your homework in the comics you get a sense of what they can do. They can manipulate energy in different ways in a blandly Marvel teaser way.

Victoria is a tortured soul, how you found that voice?

Elizabeth: Well, the voice was basically me being in a hotel room watching the news and in a hotel room screaming in a pillow about the state of the world. And you have that voice! It’s not from ten packs of cigarettes, I don’t smoke. The physicality, I lifted so much from Anthony Hopkins. We deal with archetypes in this show, a Jungian psycho geography so navigating that is fascinating through the template of the family. What helped me a lot was looking through the lens of addiction, it’s a story of a mother who loves her children. It separates her form her love and overtakes her and drives this other thing in her and so her children never know who they are dealing with. Are they dealing with a loving mother or a monster? That’s the story of children with parents who are alcoholics and drug addicts. There is also stuff that is incredibly playful, funny and wild. It’s almost Shakespearean.

As Caretaker, your role is cryptic.

Robert: We start our story and there is a new element in my life that is just as grounded and I get them name Caretaker tending her soul which I witness being shattered. So there is no reason why this child should walk through the world with any sense of confidence in herself yet she does. She is a beautiful, radiant, smart, glamorous and powerful young women. The two women I am describing make a very powerful triangle that helps me go deeper and allows me to help them in very powerful ways.

Did you read up on him?

Robert: I literally got off the part and four days later I was flying from Budapest to Vancouver so I didn’t get to do much preparation especially in the Marvel library. Paul gave me a crash course and a crash course and another crash course and then dropped me in the middle of a maze of a story and the character and I, along with everyone else, find our way out of it.

Paul: We reinvented quite a bite Caretaker from the comics. I’m not sure how much good it would have done you to look at an image of a big ole guy wearing a floppy hat whacking people over the head with a shovel.

Robert: Although I wanted to do that in the first episode.

Paul: There are Easter eggs in the show and we did give Bob a shovel in the first episode.

Curious about Daimon and Gabriella in the show.

Arianna: Gabriella and Daimon have a very complicated relationship. I come with a more religious and logical viewpoint and Daimon being a superhero with powers and more insight sees things different. In the beginning its hard to see that we are on the same time, as the episodes go on Gabriella begins to have a lot more empathy for Daimon. You realize he is someone that has been hurt.

The bond between Daimon and Dr. Hastings.

June: I essentially inherit this person, being where I am at am not quite prepared and I do it anyway. I kind of keep getting shocked but then I also keep searching for the center of this person. I come to care for that center and it sort of flip flops between combative and tough love. I think that it actually helps my character figure out who she is. I don’t think she actually knows.

Paul: One of the things we tried to infuse in each character is that they have their own moral compass. They have their own guiding principle of what is right for them and wrong for them. It’s based on their experiences and how they were raised and what to think. Their religious and cultural backgrounds have these experiences. When you have different levels of morality, who’s line are we crossing here. It just makes for great scenes between great actors and a lot of fun to play with instead of superhero’s just punching each other. If there is no morality at stake then why are we telling the story.

Alain: I’m not going to be cryptic, just kidding. I think everyone kind of touched on it, the show itself tackles the repercussions of original sin. Where you find ways to connect with people and in this sense with Anna and Chris there is a shared path and a shared healing from foster care. That’s where they originally met. I talked to my sister who is very involved in this field and I asked ‘what happens when you find yourself in that situation’ and she said trust is a big issue. You have to trust people and its important for people who have trauma to connect. Chris and Ana found themselves in a situation where they shared trauma. When they grow up they learn how to survive. I ask my sister ‘what is the success rate of coming out of foster care’ and she said I had to define what success is. When I said ‘how about somebody who has a successful business’ and she said that’s a unicorn. Chris and Ana have a symbiotic relationship between the two and Ana trusts that. I think that is the sum of the two parts between Ana and Chris.

Which of you would be most likely to go demon hunting in real life?

What is coming up this season, a tease?

Paul: For the fans of the comic books, the show is laced with Easter eggs on set, in props so keep your eyes out for that.

June: The acting, this show is ridiculous.

Paul: I second that. The cast is amazing and the stuff we’ve asked them to do is nuts.

Tom: I’m excited for people to see the second half of the season. We read each episode before we did it, by five or six you think you understand who these people are and then you find out you haven’t got a clue. Everything flips on its head and I’m really excited to see how people respond to that.