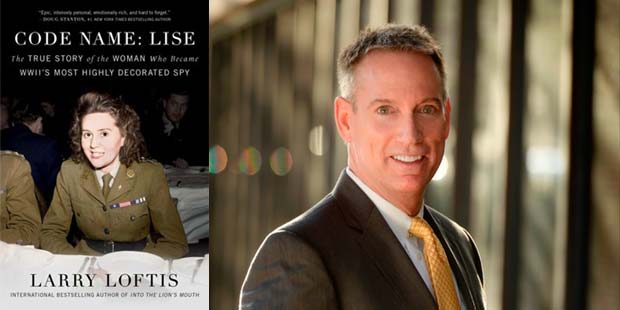 “Code Name: Lise” by Larry Loftis brings to life the most highly decorated woman spy. The story delves into how Odette Sansom displayed courage and patriotism while having to endure endless torture by the Nazis.

Born in France and living in England, Odette decides she wants to help with the war cause. Because of her knowledge of the French language and customs, she was recruited into Britain’s Special Operations Executive Program to conduct espionage on the Germans during WWII. Working closely with her commanding officer, Peter Churchill, they are able to complete dangerous missions.

Peter became smitten with her and eventually they fell in love while playing a cat and mouse game with German secret police sergeant, Hugo Belicher. He takes advantage of a mistake Odette makes and captures them, sending them to Paris’s Fresnes prison, and from there to concentration camps in Germany where they are starved, beaten and tortured.

Put on a list to be executed, she and Peter are kept alive by the Germans because of two lies she concocted. She pretended that she and Peter were married (they would be after the war) and that Peter was related to Winston Churchill, realizing the Gestapo hoped to use her and Peter as a bargaining chip.

This story delves into the details of what Odette had to endure. In the face of grave danger, she shows her courageousness and willingness to stand up to the Germans. Readers will not want to put this book down. Loftis has the ability to write it as a spy thriller instead of a dry biography.

Larry Loftis: After I wrote “Into The Lion’s Mouth,” a book about a World War II spy, I was looking for something that would fit my niche, spy stories that had a lot of action. My research led me to a German secret policeman, Hugo Bleicher. He was relentless and never gave up in his quest to capture Peter and Lise. I realized that her story is similar to that of Louie Zamperini, whose story is in the book “Unbroken.” It had everything: a love story, she and her commanding officer fell in love, courageousness and action.

EC: Since there are so many quotes did you take liberties with the story?

LL: My editor asked me this exact question. I am a law review editor and knew that all the quotes had to have sources. I also thought how these quotes appear like a movie dialogue. I went into the UK archives where the debriefings are written about and are in quotes. I also read all the memoirs of Bleicher, Churchill, and Odette. I also saw an interview she had with the War Museum in 1986. Every single line in the book is true.

EC: How would you describe Odette?

LL: I read the evaluation of her after her SOE training. She was described as temperamental, a loose cannon, arrogant, relentless, fearless, and extremely patriotic. I think she was chosen because women carriers were needed since men were picked up by the Germans to be drafted or put in forced labor. There was also the need for people who spoke French without an English accent, which she did.

EC: Do you think she was courageous?

LL: I think you are referring to the fact she was captured because she was stubborn and did not follow directions. But she more than made up for that mistake by showing her bravery. She did not talk or give out any information even after being tortured that included pulling off all her toenails.

EC: As a child she had polio and became blind. Did that experience help her after being captured?

LL: Yes, particularly in one incident. After getting polio she was completely blind for two years. Her grandfather would not let her feel sorry for herself and wanted her to become tough. When she became a prisoner, and taken to the concentration camp Ravensbruck she was put in complete darkness in a cell. Her two years blinded as a child prepared her for being in the darkness for those years in a concentration camp.

EC: How would you describe Peter?

LL: Very intelligent, athletic, able to speak five languages, a diplomat, and fearless. He was trained as a commando. This one incident describes him best. He was dropped off eight yards from the French coastline while in a flimsy canoe on a pitch-black night. He paddled alone all the way to the shore. This shows how he was confident with ice-water veins.

EC: Odette stood up to the Nazis?

LL: A scene in the book has her standing up to a German general while she was still a spy. Instead of being incognito and blending in she was visible, which showed her fearlessness, but also her recklessness. In another case she slipped handcuffs off, while confronting a German guard, which also showed her fearfulness and recklessness. I have a book quote where she tells the concentration commandant at the end of the war, “I want to know why you don’t open the gates of the camp. The war is over. It is useless murder to keep people here.”

EC: Why wasn’t she killed?

LL: I am speculating but since the Nazis thought she was married to a relative of Winston Churchill they saved her for leverage, an insurance policy. This ruse saved her and Peter’s life.

EC: What would you want readers to understand about Odette?

LL: She represents an amazing story of courage under pressure. There is a reason she received all these medals. Even though her and Peter’s capture was her fault to make amends she decides to get Peter and others she worked with out of harm’s way. She does this by telling the Germans she is the organizer of the circuit. Coincidentally, Peter plays the village idiot, denying all knowledge. The German’s buy Odette as the leader. She refuses to give up the radio guy and the new SOE leader, saving all these men’s lives. This is why she won all the medals.