Marines take to the sky in massive aircraft launch 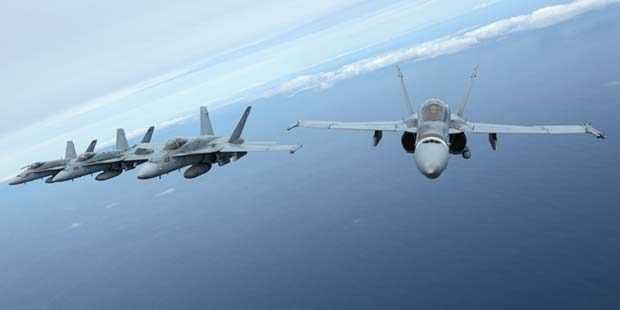 Before sunrise, numerous ground support crews were working together to set conditions for the exercise to be successful.

“Without the hard work the maintainers put forth, our aircraft won’t fly,” said Sgt. Leonardo Laboy, an aviation and electronics technician serving with Marine Fighter Attack Squadron 232, also known as the “Red Devils.” “Pilots fly often, so continued maintenance is essential to allow them to conduct training. By doing so, we all contribute to the defense of our country.”

“Marines, Machines, and Mission” is a common slogan within 3rd MAW and was reflected by MAG-11’s demeanor and passion. The Marines of MAG-11, like the parts of a performance engine, all worked together to ensure each of the aircraft were operationally ready as they do each and every day.

Cpl. Frank Carmona, also an aviation and electronics technician with the “Red Devils” stated, “If you take a team of Red Devils and give them a task, you can get so much more accomplished. Teamwork allows us to run extremely effective flight-line operations.”

As the sun rose over the eastern mountains, the aviators emerged from their hangars and quickly readied their aircraft. Within minutes, more than 30 F/A-18 Hornets and 2 KC-130J Hercules started their engines and moved to the taxiway — forming a line, known as an “elephant walk,” which stretched nearly a mile.

“The F/A-18 Hornet is an exhilarating aircraft to fly,” said Major Patrick Mullen, a Marine Corps aviator serving with MAG-11. “Being a pilot has its challenges but it pays off every time you fly. All the hard work is to ensure that the troops on the ground are supported.”

Upon receiving the command to launch, the first four aircraft throttled forward creating what is affectionately known as “The Sound of Freedom.” The power and thrust of eight afterburning turbofan engines, each capable of producing more than 17,000 pounds of thrust, shook the ground and could be felt throughout the entire body. Within seconds, they were out of sight and were immediately followed by the next four aircraft — a process that continued until all the aircraft were airborne.

“You are 100 percent committed by the time you hit the afterburners,” Mullen said. “At that point, you are relying on all of the preparation you and the ground crews put in before the flight so you can accomplish the mission.”

Commenting on what it feels like to accelerate from 0 to 200 mph, Doran said, “It’s nowhere near as awesome as it feels to have the privilege to lead over 2,500 of our nation’s sons and daughters.”

The military significance regarding the power and the capability to simultaneously employ so many military aircraft within such a short period leaves little to the imagination, especially considering that MAG-11 is only one of four MAGs serving within 3rd MAW.

Exercises such as this provide realistic, relevant training necessary for 3rd MAW to “Fix, Fly, and Fight” as the Marine Corps’ largest aircraft wing and ensures the unit remains combat-ready, interoperable, deployable on short notice, and lethal when called into action.