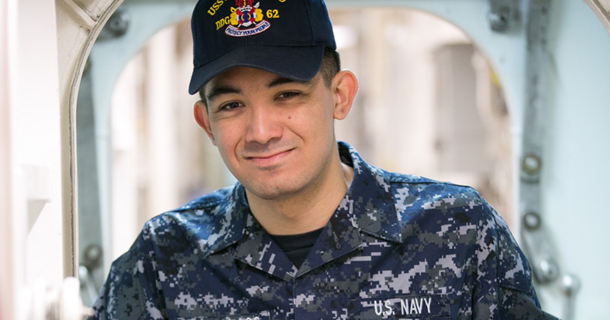 Seaman Apprentice Shingo Douglass is in an undesignated position aboard the destroyer operating out of Yokosuka.

A 2010 Fallbrook High School graduate and Oceanside, Calif. native is serving aboard the U.S. Navy destroyer USS Fitzgerald (DDG 62), living and working at the Navy’s forward-deployed base south of Tokyo.

Seaman Apprentice Shingo Douglass is in an undesignated position aboard the destroyer operating out of Yokosuka, which is located approximately 35 miles south of Tokyo and accommodates the United States’ furthest forward-deployed naval forces.

As a Sailor with numerous responsibilities, Douglass said he is proud to serve his country aboard a destroyer in Japan. He added that it is an exciting time to be in the military, and serving in the world’s greatest.

“I maintain the outside of the ship by sanding and painting, line handling and raising and lowering the rafts,” said Douglass.

Douglass also said he is proud of the work he is doing as part of the Fitzgerald’s 300-member crew, living thousands of miles from home, and protecting America on the world’s oceans.

“I enjoy being in Japan, working with the Japanese Navy and getting underway frequently,” said Douglass.

As a member of one of the U.S. Navy’s most versatile combat ships, Douglass and other Fitzgerald sailors understand they are part of a forward-deployed team that is heavily relied upon to help protect and defend America across the world’s oceans.

“The Navy is allowing me to travel, get a better understanding of how they operate while out at sea,” said Douglass.