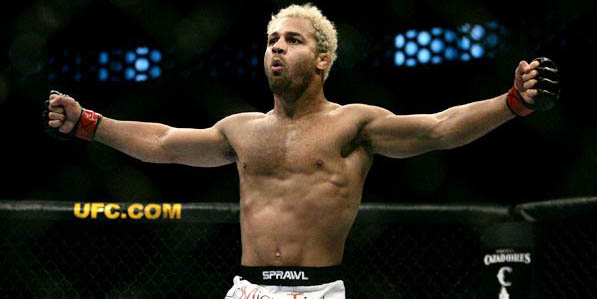 After taking a year off, 36-year-old Josh Koscheck returns to the octagon to face Jake Ellenberger at UFC 184: Rousey vs. Zingano on Saturday, Feb 28, at The Staples Center in Los Angeles, CA. A long-time fan favorite, Koscheck made his debut with the UFC on the first season of The Ultimate Fighter in 2005 and owns a record of 19-8-0. With the fight just two weeks away, MP reporter Art Garcia Jr. caught up with Koscheck and asked him about his MMA career and his upcoming fight.

AG: You haven’t fought since November 2013, how are you feeling as UFC 184 approaches?

JK: I feel pretty good. I just took some time off to rediscover my love of mixed martial arts and competing. My body is finally healthy; I’ve had great training partners and a great camp. I’m very well prepared for the fight.

AG: I know you declined a couple of opportunities to fight last year, did taking the year off give you a much-needed chance to kind of re-charge your batteries both mentally and physically?

JK: I think taking the year off let me discover that I only have a limited time to compete and fight at the highest level possible. It’s not like I’ve been fighting a bunch of bums, I’ve faced tough competition my entire career. The year off helped me remember my values: hard work, resetting my goals, going back to basics. I had to re-learn how to train hard, wake up in the morning to go to the gym – I got those butterflies again when I work out. I rediscovered my love of competition.

AG: This April is the 10th anniversary of your UFC debut – can you believe it’s been 10 years and what has been the key to your longevity?

JK: I can’t believe it’s been 10-years since I came into the UFC. I think we actually filmed the show in 2004 – I can’t remember, but I think it was 2004. It’s been a long journey. I won’t say that I’m truly blessed, but my hard work has paid off. I’ve stayed relevant, I’ve been in a lot of high profile fights and even in my losses they’ve been in big fights. I think it’s a testament to TUF 1 and the caliber of fighters that were part of that season. I’m still here and I’m thriving. I did take a year off, but that was my choice, there was no pressure from anyone for me to do that.

AG: Do you remember the goals you set for yourself and how, if any, have those goals changed over the years?

JK: My goals have always been the same. Go out and win fights. Nothing changes from year to year. Fighters come in with the mindset that we’re going to step in the cage, train hard and put everything we have out there. As an athlete you have certain expectations of yourself if you’re competitive; I’m competitive and I expect great things from myself. I’ve done great things for the UFC, I’ve been in some great fights and I would hope that my legacy is that I was a guy that would fight anyone, any place, any time.

AG: Losing three fights in a row for the first time in your career, how does that effect your preparation – do you change camps, alter your training methods, other?

JK: I think my preparation has been a little different. I listened to my body a lot more. As you get older you have to evaluate how hard you go after a hard day of training. You can’t continue to be a young 24-year-old, you have to prevent injuries, and you have to know when your body needs a day off and not be afraid to take a day off so you can come back stronger.

AG: Tell me about Jake Ellenberger and how well you match up with him?

JK: I matchup very well against Jake. He’s a great fighter who has faced high-level, top-tier guys as well. He has heavy punches, pretty good wrestling and a wealth of experience like me. It’ll be a good, fun fight for the fans and I think we’ll bring our ‘A’ game and put on a good show.

AG: Every fighter I’ve interviewed says the biggest fight of their career is their next fight. You are contracted for two more fights, at age 36 how much longer do you want to compete?

JK: For me, every fight is the same. I have the same goal, I’m competitive and I want to win because I’ve put in the hard work. The more work you put in, the more you desire to win in front of the public, nothing has changed.

AG: Can you tell me about the company you started, Check Defense, and what was the inspiration behind it?

JK: My inspiration was that I didn’t have the opportunity to serve in the military so this is my inspiration to give back to the people who have served for our freedom. It’s been a great to be able to have 51-percent of the staff be veterans and to give back to those who gave their freedom and lives for our freedom. One of the biggest things about it is that fighters and military have the same mentality – go out and defeat their opponent.

I love visiting the military bases – Fort Bragg, Fort Benning – I fought at Fort Bragg and it was one of the greatest experiences of my career. Every time I get to spend time with the military I come out very humbled. Hearing their stories and the adversity they’ve experienced. For me, it’s my opportunity to give back.

AG: Do you see yourself in this occupation after you retire or do you other plans for life out of the octagon?

JK: When I’m done fighting I’ll always be involved with MMA in some way, but for me it’s about longevity of a career. I have several other businesses aside from fighting and Check Defense. I want to grow and help give back to our military that fight for our freedom and to give us the things we have. America is a great country and I’m proud to say I’m American. I’m very patriotic. In a lot of other countries they don’t have the right to be Christian or Islamic or to even choose their religion, they don’t have the freedom to be who they want to be and we do.

AG: Any prediction for the fight?

Ringside: Like Ellenberger, Koscheck’s three-fight losing streak has been against the top-notch fighter in the welterweight division. In May 2012 he lost a split decision to Johny Hendricks at UFC on Fox: Diaz vs. Miller – Hendricks, who won the welterweight championship last year, is currently ranked #1 after losing the title in a rematch against Robbie Lawler. At UFC 157 in February 2013, Koscheck lost to Lawlor via TKO (punches) in the first round – Lawler is the current welterweight champion. In his last fight he was KO’d (punches) by Tyrone Woodley at UFC 167 in November 2013 – Woodley is currently ranked #3.