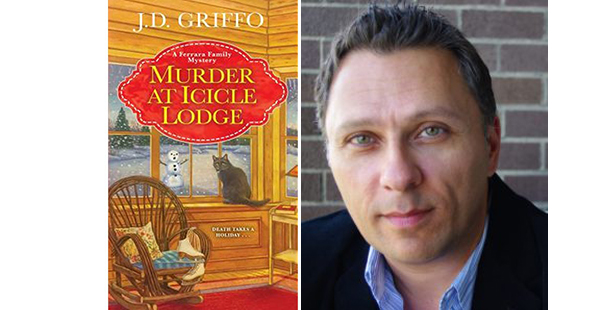 Murder At Icicle Lodge by J. D. Griffo brings back the Ferrara women detective team. They are investigating a murder where the people of interest mount up.

The four women are related and range in age from 65 to GenX. They are Alberta, her granddaughter Jinx, sister Helen and her sister-in-law Joyce with a supporting cast of police chief, Vinny; Jinx’s boyfriend, Freddy; Alberta’s boyfriend, Sloan; and Helen’s frenemy Father Sal. What makes these characters so likeable is their humorous banter.

This installment has reporter Jinx invited to cover the new lodge that is opening and featuring a famous Olympic gold medal ice skater, Pamela Gregory, making her return to the rink.  She was given two rooms, which allowed her to invite her grandmother, her aunts, and their significant others. Also going is the police chief who is a big fan of Gregory.  As everyone is looking forward to see Gregory’s special performance, Alberta comes with the news that it will not be happening.  She relays how Pamela was found dead on the ice. To make matters worse a blizzard keeps the authorities from reaching the lodge and keeps those there entrapped. Now Alberta and company must find the killer before other murders mount up.

“I wanted the Lodge to be a character. The name actually came before the description. Everything happens there like the Clue game. I decided to make it big and foreboding. There are traps everywhere that can conceal secrets.  Inside it is homely, but outside it becomes dangerous.”

Griffo noted, “Ever since I was young I’ve been fascinated with figure skating. Some might rightfully say obsessed. I have no idea what the appeal was since I grew up in Hoboken, New Jersey, which is not a winter sports mecca. The artistry, the athleticism, the music, and the costumes all swirled together to create this unique world of magic and pageantry that had me transfixed. The skaters I watched were elegant, graceful, and possessed a controlled strength and power that allowed them to glide over the ice at breakneck speed and jump into the air with wild abandon. All the while looking downright fabulous.”

This cozy mystery has engaging and quirky characters that must battle the red herrings to find the killer.  There are tidbits added about the Italian culture to make for a more interesting read.