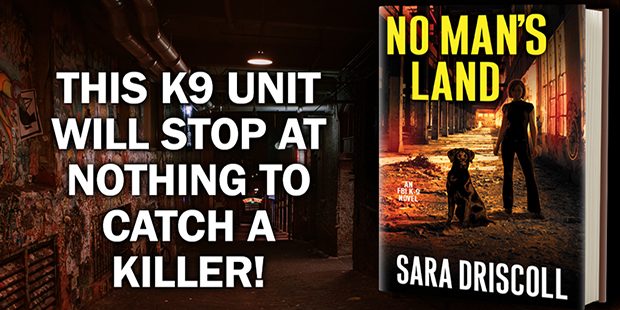 No Man’s Land by Sara Driscollhas a unique plot. A suspenseful mystery, whose main characters include K-9 dog teams, brings the characters to life. For first time readers, Driscoll is the pen name for Jen J. Danna and Ann Vanderlaan, who also wrote the Abbott and Lowell Forensic Mysteries.

The story begins with Meg Jennings and her K-9 companion, Hawk, exploring the ruins of a deserted building to sharpen their skills without the life-or-death stakes they face as part of the FBI’s Human Scent Evidence Team. While searching, Hawk finds the body of an elderly woman. The victim was left to die alone and unable to save herself. Through the investigation it is discovered that there is a spree of such killings where the elderly is left at urbex sites to die. Meg and her team must find the culprit who is particularly cruel, first kidnapping them, and then leaving them to die alone in a decaying and scary structure.

“Hawk is based on a dog I had as a child. He is loyal, driven, and goal oriented.  He was rescued by Meg as a puppy.  She was a canine officer who lost her partner, a German Shepherd while bringing down a suspect. To recuperate she went back to her parents and found a black lab puppy that had contracted the parvo virus. Meg helped nurse the puppy back to health and trained her to be a rescue dog. She is a dog lover. But in her professional life can be stubborn, loyal, takes on more than she should, and is a straight-shooter.”

Interestingly, the writers put the vocabulary pertaining to the plot at the beginning of each chapter.  In this installment, urbex or urban exploration is an activity that people do to observe condemned sites that are left to deteriorate on their own.

“Many years ago, I stumbled upon a website called Opacity that has photographs of abandoned places.  Tom Kirsch runs it and takes fabulous pictures.  I was impressed by his ability to create an atmosphere with his photography as well as the range of locations and type of structures. It is not an exploration of nature, but of urban sites. We realized that urban exploration would provide interesting, challenging, and dangerous search locations for the K-9 teams. The title of the book comes from the space between the fence and the building.”

The cast of characters teaming up with Meg are her sister Cara, who is a dog trainer and yoga instructor, Cara’s boyfriend Clay McCord, who is a journalist with connections and research skills, Chuck Smaill who helps find the best urbex sites to search, Meg’s boyfriend and EMS firefighter Todd Webb, and the rest of the search/rescue dogs: Blink, Saki, Coy, and Lacey.

This interesting premise has a subject matter that is endlessly captivating. Strong, confident, and likeable characters work together to help unmask danger and murder.