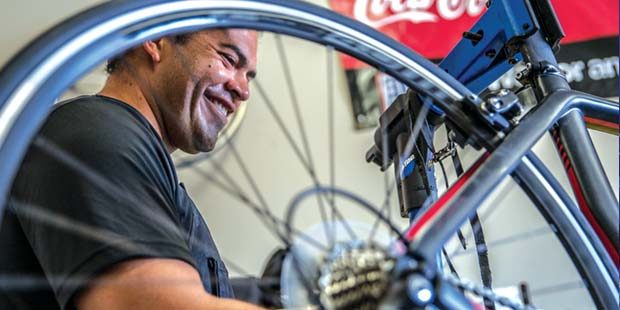 Wounded warrior gives back to brothers and sisters-in-arms

CAMP PENDLETON — A baseball pitcher with the Compton Community College Tar-Babes stared downfield at a rival opponent and threw a perfect pitch. With his “good arm, wicked fastball and nasty split-finger,” freshman Fernando Andrade captured the attention of a Los Angeles Dodgers scout.

Little did the scout know that Andrade had big plans for his future. When the scout asked Andrade what his intentions were, Andrade told him that he was going to join the Marine Corps. The scout simply nodded, wished Andrade good luck, and carried on with his day.

Andrade joined the Marine Corps in December 1995 and became a field radio operator. His career took him to countries around the globe and afforded him many opportunities to experience different aspects of the Corps. He served with 2nd Battalion, 1st Marine Regiment, 1st Marine Division, the 13th and 15th Marine Expeditionary Units, and at U.S. embassies in Liberia and Belgium as a Marine Security Guard. While serving with 2/1 and the 13th and 15th MEUs, Andrade supported Operations Southern Watch, Infinite Moonlight, and Iron Magic, and deployed to the Middle East four times in support of Operation Enduring Freedom in 2003, 2004, 2009 and 2010.

In 2015, Andrade received orders to Twentynine Palms, and described this time as a “dark hole.” While reporting into his new command, Communications Training Battalion, Marine Corps Communication-Electronics School, he collapsed.

“At the time, I did not know it, but I had a panic attack,” Andrade said. “The medical personnel treated me for cardiac arrest.”

After being discharged from the hospital, Andrade continued with his daily life until months later, when he ended up in another hospital bed. The local medical facility did not know or understand the symptoms he experienced and were unsure how to treat them.

Oblivious of his condition, Andrade attended the Marine Corps Ball in November 2015 at Pechanga Resort and Casino in Temecula. Yet again, Andrade collapsed at the table. Paramedics arrived and treated Andrade for cardiac arrest, but once he arrived at Christian Valley Hospital in Temecula, they discovered that he showed no symptoms of cardiac arrest.

Test after test was conducted to determine what the cause until it was discovered that Andrade had in fact been suffering from panic attacks and by January 2016, found himself in a hole he thought he would never escape.

“My alcohol consumption went through the roof and I was yelling at my wife, causing too many altercations between us,” Andrade stated. “I was highlighted by my command and they were aware of what was going on.”

In March and April that same year, Andrade attempted suicide. The mental health office in Twentynine Palms sent him to the Overcoming Adversity and Stress Injury Support (OASIS) residential program at Naval Base Point Loma, where he spent 60 days in an inpatient program. Andrade was also diagnosed with a traumatic brain injury, as a result of numerous blasts and explosions during combat operations. During his stay at OASIS, Andrade received various forms of therapy to treat his mental health symptoms.

“I returned to my unit and it just wasn’t the same,” Andrade said.

A few months later, Andrade was transferred to Wounded Warrior Battalion-West on Camp Pendleton. Here, Andrade was introduced to cycling and swimming, both of which became a source of peace and tranquility during dark days.

“I think cycling is what interested me the most because it’s tough, it consumes you and it wears you out,” Andrade said with a smile. “It provides you freedom and gives you a second chance at life.”

In the summer of 2017, Andrade competed in the Marine Corps Trials on Camp Pendleton, where he qualified for Team Marine Corps and traveled to Chicago to participate in the DoD Warrior Games. The cycling race was 20-miles long and consisted of numerous hairpin turns in the streets of downtown Chicago. Andrade has also competed in numerous local cycling tours and charity rides.

With competition comes training. Andrade and his fellow wounded warriors put in long hours throughout the week to prepare for upcoming competitions while building camaraderie and cohesion between one another.

“We meet up, give each other some brotherly love, see how one another is doing, and take off,” Andrade said. “It’s a team effort.”

Now retired, Andrade dedicates roughly six to eight hours a day maintaining bicycles that he and his fellow wounded warriors use for competitions, cycling tours and therapy. Building and knowing his fellow comrades have a fully functioning bike for their training is what brings Andrade extreme joy.

“Without maintenance, this shop would not be functioning; we would not have the Marine Corps Trials, the Department of Defense Warrior Games or cycling tours in San Diego,” Andrade said.