Q/A ABOUT THE BOOK THE SUSPECT 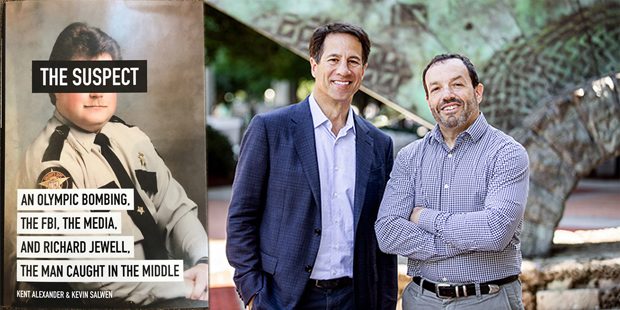 The Suspect by Kent Alexander and Kevin Salwen is a must-read book. It details how Richard Jewell was accused of being the bomber at the 1996 Atlanta Olympics.  Instead of being a hero for saving many lives, he became the main person of interest by the FBI and the press. Former U.S. Attorney Kent Alexander and former Wall Street Journal reporter Kevin Salwen reconstruct all the events leading up to, during, and after the Olympic bombing, showing how much of the law enforcement evidence was ignored, mainly because of tunnel vision.

Elise Cooper: Why did you write it now?

Kent Alexander:   I have wanted to write this book for over two decades, ever since delivering Richard Jewell’s clearance letter. My coauthor Kevin Salwen and I started reporting and writing The Suspect in earnest five and a half years ago. This past November, we were finally ready to publish.

EC:  Do you think that Jewell is still considered by many a suspect?

KA: Not by many, but a few. One of our main characters, former FBI Special Agent Don Johnson, went to his grave convinced Richard Jewell was complicit in the Olympic bombing.  He was wrong.

EC: Do you think the press and media made Jewell out to be not the brightest?

KA: Yes. Richard was no academic or intellectual, but he was a law enforcement professional who took his job quite seriously. Sometimes overly so. He prided himself on having a “seventh sense” to detect danger, and thank goodness he did.  He saved countless lives. Richard Jewell is a bona fide hero.

EC: Kathy Scruggs was no angel in the book or movie-are you surprised by the press’ reaction to the movie?

KA: Yes and no. I knew Kathy. She was a great police reporter, and also quite edgy and colorful: smoked a lot, drank a lot, talked smack, dressed provocatively. Kevin and I absolutely loved writing her as a character. But we found no evidence Kathy traded a promise of sex for her Jewell-is-the-suspect scoop, as depicted in the movie. To me, more surprising than the press’s reaction to the film was the Atlanta Journal-Constitution’s (AJC) preemptive strike that triggered it. The AJC got ahold of an early copy of the script and began criticizing the movie before it even hit the theaters. The paper defended Kathy’s integrity as a journalist and, at the same time, deflected scrutiny of its own role in outing Richard Jewell as the suspect. Brilliant, really.

EC: How could the FBI get it so wrong-have an agenda?

KA: The FBI’s agenda at the start was singular: to find the bomber before he struck again during the Olympic Games. But a combination of stranger-than-fiction factors which we weave into The Suspect led to the rush to judgment. Leading the way was a behavioral science profile, developed by the Quantico unit featured in Silence of the Lambs. We reveal its contents for the first time. Many readers find the profile to be one of the most jaw dropping elements of the true story.

KA: Tough question to answer in short strokes, because our book is character-driven and features all three. But here goes: Richard is the hapless hero-turned-suspect, who loves law enforcement and is full of surprises. Who knew he was the lead singer in a rock n’ roll band that played college campuses? Don is the crusty veteran FBI agent with a dark past who makes the case that wasn’t. Ultimately, he faces a crisis largely of his own making. Kathy is the blonde bombshell ace police reporter who broke the Jewell story and spends the rest of her life tracking down the real bomber, Eric Rudolph. Halfway through The Suspect, we add Rudolph as a character. He strikes again and again.

EC: Do you think the FBI was malicious?

KA: No, but certainly wrong. Some in the Bureau fell prey to what many today label “confirmation bias.” The behavioral science profile all but said Richard was the bomber, and much of the investigation centered on proving that speculation correct.  Quirky comments became evidence. Coincidence became proof. And, too quickly, suspicion turned to presumed guilt.

EC: How could BSU get it so wrong and go beyond what they normally do?

KA: That remains a mystery to me. They so often get it right, but certainly not this time. I vividly remember agents handing me the four-page-single-spaced profile on July 30, 1996, the day the BSU faxed it down to Atlanta. I stood slack-jawed, reading the analysis. When I was finished, the agents asked for it back. I didn’t see the document again for another twenty years, when Kevin and I unearthed a copy during our research.

EC: Why did the FBI have tunnel vision toward Jewell and not investigate anyone else or even the evidence that did not fit the crime?

KA: They actually did investigate others. Early on, there was a “Jewell team” and an “Other Suspects team.” For a time, though, the task force mostly focused on Richard. Unfortunately.

EC: The role of then FBI Director Freeh in this incident?

KA: We detail Louis Freeh’s role, especially his controversial and to-our-knowledge unprecedented step of an FBI Director interrupting a field interview (of Jewell) midway with instructions to change course of questioning. Many agents criticized him – fairly or unfairly – for micromanaging. As we detail in the book, when headquarters suspended Agent Don Johnson after the interview, his colleagues in Atlanta took their own unprecedented step in response.

EC: The role of the press in this incident-why didn’t they do any investigative work?

KA: Kevin, who oversaw the Wall Street Journal’s Olympics coverage at the time, often laments the paucity of original reporting. Too often, news outlets simply repeated what others wrote. Media confirmation bias contributed mightily to Richard’s trial and conviction in the court of public opinion. That said, there was some good investigative media work. For instance, we detail Atlanta Journal-Constitution reporter Bill Rankin’s epiphany that Richard could not have made the 911 call warning of the bomb. Though the FBI already knew that fact, the AJC story marked a turning point in both the public and media’s perception of the investigation and of Richard Jewell himself.

EC: The FBI was very devious: entrapment with the video, not putting Jewell’s lawyer through to talk with his client, leaking to the press, and the ruse of Miranda Rights?

KA: There were plenty of Bureau mistakes, but most glaring may have been the handling of Miranda. Back in 1996, when I first saw the video of the Richard Jewell interview, I felt sick to my stomach. As Kevin and I write in The Suspect, I hit the pause button and called my main contact at the Justice Department, Merrick Garland. (Yes, that Merrick Garland.) The leak? No excuse. The training video, along with several lawyer exchanges, is the stuff of novels.

EC: Anything you want to add and what do you want Americans to get out of it?

KA: We hope readers continue to enjoy The Suspect, which we’ve written in narrative nonfiction style of terrific books like Eric Larson’s Devil in the White City and Daniel James Brown’s Boys in the Boat. Lessons for Americans? First and foremost, slow down and avoid rushes to judgment, especially in this 24/7 social media news era. Wait for the facts, and value accuracy over speed. Who knows? At the end of the day a suspect may even turn out to be a hero. Richard Jewell certainly was.