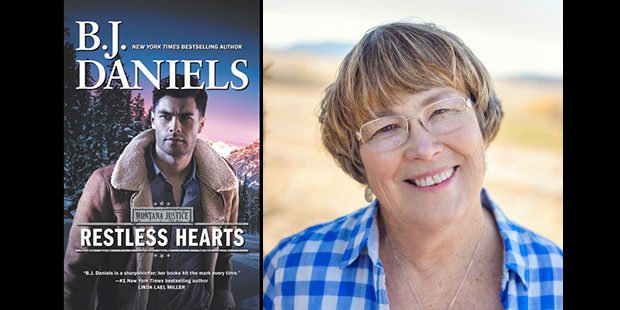 Restless Hearts by B. J. Daniels is the first in a new series and it starts off with a home run. This story has a great murder mystery, some western romance, and family conflict.

The plot begins with the heroine, private investigator Blaze McClintock, returning home.  She is asked by the Judge who set her on the right path to help her estranged father who is accused of murdering a neighboring rancher. As the investigation takes hold she realizes something is amiss and that her father might actually be innocent. The judge also asks investigator Jake Horn to help Blaze, which reunites them.

The author noted, “Prickly, gun shy, stubborn, had abandonment issues, and a wild spirit.  After she lost her mother she blamed her father and became estranged from him.  Because of her background she built walls. I contrast her with her friend, both are in an abusive relationship.  Blaze gets out of it and does not look back, while her friend made excuses.”

Jake and Blaze are in conflict against many in the town who hate her father for raising buffalo (bison) instead of cattle. This will remind readers of the tension between the farmers and cattle ranchers or sheep ranchers versus cattle ranchers. Because her dad has plenty of enemies, the suspect list grows larger and larger. To make matters worse, whoever is the killer wants to put an end to the investigation by killing Blaze and Jake.

In addition to having to deal with her father’s being accused of murder, Blaze realizes there is still chemistry between herself and her ex, Jake. But they both have to overcome the wall that Blaze has built around her. Unlike most romances this one has Jake wanting a total commitment that includes marriage, while Blaze wants to just feel the passion again.

This novel has a suspenseful plot with a mystery, and a tightly-woven edge of your seat tension. Daniels will keep readers guessing until the very last pages. She expertly weaves into the mystery the romance.