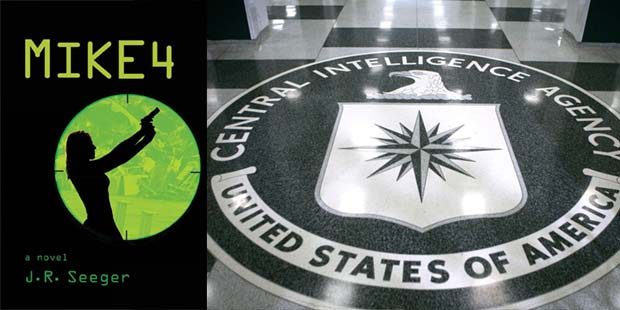 “Mike4” by J. R. Seeger brings to life the work of a CIA operative. Using his own experiences, he is able to tell a realistic story. His accomplishments include having served as platoon leader, company commander and multiple staff assignments in the Airborne Infantry from 1981 to 1985, as well as chief of station, chief of base and unit chief for the CIA from 1987 to 2004.

The fictional plot finds Sue O’ Connell deciding to follow in her parents’ footsteps and become an operative for the CIA. Her assignment is to find terrorists so that SOF assault teams can “finish” the target. Just as the author came from a military background before joining the CIA, so has Sue.

An injury forces O’Connell to leave the military and join other SOF operators training to become counterterrorism intelligence collectors. But as she continues her training, given the code name Mike4, and after joining the surveillance world, she finds her family held secrets. Beyond just the covert world of their profession, they have a history that includes both counterintelligence secrets and a 60-year old Russian vendetta.

This riveting tale allows someone to take the journey with Sue as she goes from the CIA training at the Farm to a field operator. Anyone wanting to understand the shadowy often hard-edged world of counter-terrorism within a mysterious plot should read this novel.

Elise Cooper: I am wondering if you can explain the security clearances?

R. Seeger: I still have my clearance because I do all kinds of stuff within the intelligence community. Traditionally since 1947, former directors have kept theirs with the idea that the seniors could provide advice, counsel and become red teams for the current director. The benefit comes with the different perspectives as they sit in a room together offering a diversity of opinions about any strategic issues. The only way they could have these conversations is having their clearance maintained.

EC: Russia is the adversary in your story?

JRS: The Russians’ purpose is to create sufficient chaos in the West, doing whatever they please in what they would call “the near abroad.” The Russians are taking active measures all across Europe, the U.K. and the U.S. The objective to have the Western world totally focused on the political chaos within their systems instead of Russian expansionism. This geo-political perspective is very much consistent with what was going on during the Cold War in the 1950s, 1960s.The difference is they are using inexpensive yet sophisticated methods, doing it with the Internet instead of tanks.

EC: Can you explain the quote about Russia, which is very timely today?

JRS: You are referring to the book quote, ‘Americans believes in open-source intelligence and think tanks. Russians understand the outside world is a created reality… and understand that the real world is a world of secrets, backroom deals, deceit, and theft.’ I wanted to explain that every Russian I ever met lived in a world where nothing could be trusted, and everything was manipulated at the Kremlin level. Their two newspapers are described, one is supposed truth and the other is supposed news. Yet, people would say there is no truth and no news. The complete and utter control is with the power.

EC: When did you write the book?

JRS: The story was written in 2013 and it takes about two years for the PRB to clear the book. The O’Connell family is a metaphor for the rest of the world. Sue thinks she knows everything that goes on within her family, but finds out all kinds of things she never knew.

EC: You give a shout out to amputees?

JRS: When I did special ops training I met people who had amputations below the knee (BTK). They were previous special operators who were injured in Iraq and Afghanistan. Refusing to be victims, and wanting to stay in the game, they became human intelligence collectors. The guys and gals I worked with did not reveal until after the fact that they were BTKs. Just as with my character Sue, they did not want anyone to know and pity them. They were as hard as a woodpeckers’ lips.

EC: What is based on your experiences?

JRS: The way the characters talked and thought is based entirely on my experiences. The feedback of those in the game said this is how they talked and thought. I wanted to make sure this book is as realistic about this community as I know. The people in the story are based on a compilation.

EC: Can you explain the book quote, “Ginger Rogers had to do everything Fred Astaire did, but backwards and in high heels”?

JRS: I wanted to write something that captured women in the Special Operations Forces and intelligence communities. I know the current CIA Director, Gina Haspel, who is a good friend of mine. I have known her since 1991. She is a fascinating person.

All the women from Gina’s era through the present-day focus on just doing the job. Barbara O’ Connell, the mom, showed how spectacular women did the job. The current generation are succeeding because the previous one had courageous women who paved the way. As Sue says, once you get through selection that is it. It does not matter your sex, sexuality, race, color or religion, because it becomes all about performance. If the operator holds up their part of the bargain, they are a part of the team, and if someone does not, then it is RTU, return to unit.

EC: Can you describe Sue?

JRS: Aggressive, independent and sometimes a rule breaker. She is learning how to apply her skills. BTW: I did not physically describe any of the characters on purpose, although I put in this book quote to show her feelings, “To survive life in an SOF unit she always had to be tougher, faster, and smarter than the guys if she was going to get any respect.”

EC: So did she earn her team’s respect?

JRS: Yes. As I said earlier, she finally realized she has nothing to prove, that she earned her place. Anyone who tried to cause trouble for her because she is a woman would be gone. I describe it as all the different parts of the military: Army red, Airforce sky blue, Navy navy blue and Marine green become purple when blended together. Once someone proves themselves they are just one of the purple people.

EC: You describe case officers in the novel?

JRS: They are good at manipulation, understanding the different cultures and recruiting assets.

EC: Readers learn of an agency rule: “Everything we say is true, just not truly complete.”

JRS: In my first tour I heard it and have expressed it ever since. I wanted to show how Intelligence collection is an art, not a science, because human beings are involved. Operators had to find out what is in the assets head and if they will obey instructions. Not everything we knew is told to headquarters because it is impossible to express everything known on paper. But the direct boss is told everything.

EC: What do you want readers to get out of the story?

JRS: First and foremost, wounded warriors should not be framed as victims. There are a lot of people still in the fight that have catastrophic injuries and chose not to be pitied. They just get fixed and go back into the fight. The second point, special operators are right now in at least 50 countries. Americans need to understand the personal cost of a very small group of men and women. They are in combat 120 to 180 days, home for 30, back in training for 30 and then returned to combat. The vast majority of Americans today do not even realize we are still fighting al-Qaida because less than 1 percent know someone in the fight.

EC: Can you give a heads up about your next books?

JRS: This book, “MIKE4,” begins a tale of the O’Connell family that will continue this fall with “Friend or Foe” and, once cleared by the PRB, will continue with “The Executioner’s Blade.” The prequel for the story will be “O’Connell’s Treasure,” which will remain inside the boundaries of 1943-1946 so that the PRB review is not required. I would very much like to continue the story of Peter O’Connell the elder with “Rough Diamonds” and even write about Sue O’Connell’s parents’ operation.