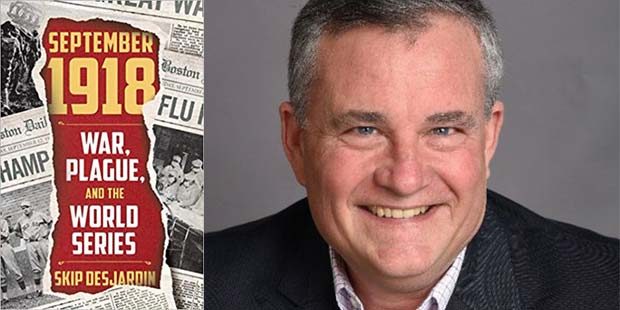 “September 1918: War, Plague, And The World Series” by Skip Desjardin links together WWI, the Spanish flu epidemic and the 1918 World Series by using Boston as a common thread. He also references politics, economics, science and their impact on the three important events of 1918.

“I happened to read a novel, ‘The Given Day,’ by Dennis Lehane that was set in Boston in 1919,” Desjardin said. “In that novel, Lehane refers to the events of the previous year: The Spanish Flu and the World Series. I came up with a lot of questions. The more I researched these connections the more I thought there is a story here. I wanted to finish the book before the 100th Anniversary of WWI’s end.”

Leading the first American fighting force in France was a division of Massachusetts militia volunteers. At precisely the same time the Spanish Flu erupted in Boston and its suburbs, bringing death first to military facilities and then to the civilian population. Amidst the surrounding ravages of death at home and overseas, a young pitcher named Babe Ruth rallied the sport’s most dominant team, the Boston Red Sox, to a World Series victory.

During the month of September, the flu became rampant. Naval personnel became ill less than 10 days after the first influenza cases appeared on the receiving ship. Camp Devens served as a training camp for the 76th National Army Division. The camp was overwhelmed as the influenza attacked approximately 10,000 soldiers. The deadly virus symptoms included severe headache, weakness, general malaise and pains of varying severity in the muscles and joints, especially in the back. The author put everything in perspective, “700,000 people were killed from that epidemic, while last year 80,000 died from the flu. In 1918 our population was only a fraction of the size it is now.”

Overseas the American forces faced devastating attacks by the Germans. Having to contend with the constant shelling, they also dealt with the fumes from the shells that rendered many sick, vomiting and gasping. But worst of all were the chemical weapons used against the allied forces. Men came home with respiratory problems, loss of eyesight and blistering skin.

“I wrote about the veterans who became disfigured and had emotional problems,” the author said. “The effects were horrendous and lifelong for those who survived. It was horrible. For many, it was confusing and devastating because they did not understand how to handle chemical weapons. This led the world to ban chemical weapons.”

Desjardin writes how the baseball team rosters were decimated after America entered WWI. One-third of all the players from the previous season of 1917 was serving in the military. During the 1918 World Series attendance was down and those spectators that were in the stands gave an unenthusiastic response to the Red Sox winning the World Series, possibly because everyone was facing the stark reality of war. One such example written about in the book was Cubs’ President Charlie Weeghman, who registered at the Boston draft board.

“I wanted to show how the war pervaded every aspect of the American life. The government had issued a work or fight edict, which caused the World Series to be played in September instead of October. Every man in America between the ages of 21 to 30 had three choices: enlist, register for the draft, or get a job in a war-related industry. The job had to be connected to directly supporting the war effort. Since all the games played were day games only those outside of that age group had the time and money to buy tickets.”

Even more compelling was the anger at the obvious greed of the players. While men were being sent overseas to fight, those playing in the World Series, the Cubs versus the Red Sox, argued about receiving the same share regardless of how long they had played with the team during the season.

Desjardin explained, “There were bad feelings that these perfectly healthy young men playing baseball were paid three, four, and five times the average salary of most Americans, while other young healthy men were dying or wounded in the French trenches.”

Patriotism was at a high point. As Desjardin recounts, Karl Muck, a conductor of the Boston Symphony was born in Germany and became a Swiss citizen. Although he was willing to play the “Star-Spangled Banner,” it was decided that it would not be played. Theodore Roosevelt responded, “Any man who refuses to play ‘Star-Spangled Banner’ in this time of national crisis should be forced to pack up and return to the country he came from.” It was during this time, the National Anthem became a symbol for supporting veterans and those attempting to keep Americans safe.

This book is an interesting look how sports connected with those fighting in the Great War. By intertwining stories Desjardin shows how September 1918 was an important moment in history, weaving together politics, sports and science.