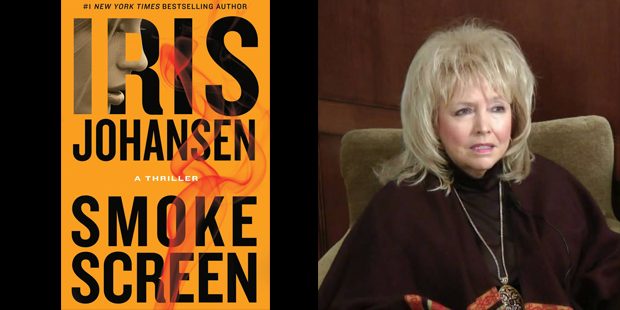 Smoke Screen by Iris Johansen brings to life a realistic page-turner. Readers will be reminded of the genocide in Rwanda through some of the descriptions in this plot.

Women empowerment are always a part of the stories that Johansen writes.  “I like writing strong women.  In this one I had a bunch of them.  They showed the world what they could do.  One quality they all had in common was independence.  They are talented and bad ass.  I think they complement each other and their male counterparts.”

The plot begins with Journalist Jill Cassidy leaving the fictional country of Maldara to approach forensic sculptor Eve Duncan for help. She is given a heart-wrenching story by Jill who asks her to reconstruct and identify children who were brutally slaughtered. Eve agrees because she wants to give these children back to their parents and help to provide closure. But Jill actually has a different agenda and has manipulated Eve to this African country under somewhat false pretenses. The real reason Jill and CIA agent Jed Novak need Eve is to determine if the skull of mercenary Nils Varak is someone else, done to make the world believe he’s dead.

Johansen noted, “I want to write fresher stories that are new and different.  This is why I put an emphasis on Eve’s career.  I hope readers like the character Jill.  I see her as tough, sympathetic, driven, determined, a loner, and a manipulator. I had to strike a note in the book, because I did not want her to be too much of a manipulator of Eve. She is basically an honest and forthright person who had a goal and went after it.  I admired her as a journalist.  Much like her is Novak who is also very driven, tough, and smart.  They are definitely simpatico. Together, they make a great team.”

She went on to say that she plans on bringing back these new characters, “In the next Eve book, Jed Novak will be a major secondary character and Jill will be mentioned. There will also be a dog in it because I am in love with dogs and I think they should be cherished.”

As with all her books, the antagonists are truly immoral people with no redeeming qualities. Varak and his men have raped and beaten Jill, and has burned beyond recognition 27 children. He is assisted in his evil ways by Zahra Kiyani, who became President of Maldara after her father was assassinated. She seizes more and more power and wants to become the country’s Queen. Zahra thinks it is her due as a descendant of Cleopatra’s daughter Kiya. This plot-line actually  enhances the novel because the skulls play such an important part of the story and referring to ancient times seems a natural flow.

“My books these days are a little tougher. In this novel, Zahra becomes an Cleopatra-like evil person.  My bad guys must be truly bad.  I hope from the very first page readers root for them to get their due.  People should not feel sorry for them.  In my next Eve book the bad guys are really bad.”

To counter those bad guys as the conflict rises, Joe Quinn leaves London and flies to Eve’s  side, intending to help and protect her. As the plot becomes more intense, Eve, Joe, Jill and Novak find themselves up against a much greater evil; one they are determined to stop.

Johansen introduces new characters, which enhances those fan favorites characters. At times, the focus of the book is Jill. But this takes nothing away from the plot and actually adds to this spell-binding page-turner.