Soldiers compete to be ‘best’ 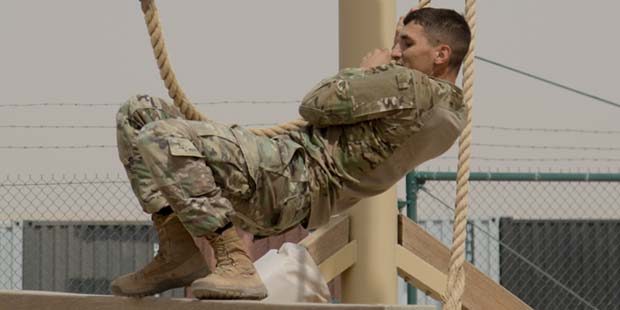 CAMP ARIFJAN, Kuwait – The U.S. Army Central Soldiers Best Warrior Competition is an annual event overseen by USARCENT and subordinate units as a means of identifying and recognizing soldiers who demonstrate a commitment to the Army values, embody the Warrior Ethos, and represent the force of the future.

Soldiers were chosen from ARCENT’s area of responsibility. Each year participating commands send their best enlisted soldier and non-commissioned officer to Camp Arifjan to represent their unit.

This is the 17th year that the USARCENT Best Warrior Competition has been held at Camp Arifjan.

During the competition, competitors are tested for their aptitude through board interviews, physical fitness tests, written exams, obstacle courses, and other soldier tasks and drills relevant to the Army’s operating environment.

Sixteen Soldiers participated in the competition which promotes morale and cohesion among Soldiers, and reinforces the importance of individual excellence.

“Competitions like this include the physical aspect, mental part of it, and the hands-on portion, so overall I think it’s a great event for Soldiers to maintain their combat readiness,” said U.S. Army 1st Sgt. James B. Kerney IV with the 202nd Military Police Company.

The second day’s events spanned 17 hours and started with a timed run through a grueling obstacle course, qualify with the M-9 pistol and M-16 rifle using the Engagement Skills Training system, and ended with a night land navigation course.

“The obstacle course was physically demanding,” said U.S. Army Sgt. Nigel A. Charles, a military policeman, assigned to Combined Joint Task Force – Operation Inherent Resolve. “The terrain, as well as the heat and the wind blowing sand in your face just made it harder.”

The third and final day comprised of an 8-event physical fitness circuit, timed reflective essay, complex board appearance and finished with the awards presentation.

Charles stated, “the Army has always emphasized overwhelming the enemy with devastating strength, and you can’t do that with lack of readiness, you have to strengthen the force, and they always have to be ready to go.”

Following the circuit events, competitors were tested on their ability to effectively communicate life experiences through a reflective essay.

“I’ve continued my education and had to write numerous papers thus far, so it just came down to learning and understanding the Army style of writing and adapting to it on the fly,” said Charles.

The final event of the competition was the board appearance to assess the Soldiers’ demeanor, professionalism, and overall Army knowledge. While sitting in front of five U.S. Army senior enlisted Non-Commissioned Officers, the Soldiers had to maintain their military bearing and answer hand-picked questions without any hesitation.

“We have a saying back in Fort Hood, Texas, with the 410th Military Police Company, ‘we do it all, Bravo Spirit’,” Charles said. “And what that means to me is no matter what it is, you adapt to it, and you overcome which applies to all aspects of the Army.”

The USARCENT Best Warrior Competition concluded with the award presentation.