Stephens readies for bout with Aldo 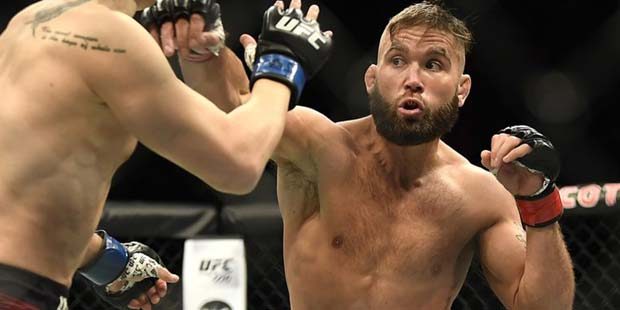 If you don’t get enough fireworks on Independence Day, there will be plenty of explosive action on July 28 when former UFC Featherweight Champion Jose Aldo faces Jeremy Stephens in the co-main event of UFC on FOX 30.

Art Garcia Jr.: So it’s six weeks out before the fight, how are you feeling?

Jeremy Stephens: I’m feeling good man. It’s Monday and I practiced this morning and I’m gonna go back a little bit later on … it’s the middle of the grind and we’ll embrace it. It’s a beautiful day out here in San Diego and we’re living in the moment.

AG: Where did you get the nickname “Lil’ Heathen?”

JS: It was something my mom always called me when I was younger. I was one of those hyper kids where some people put their kids on medication and pills (to calm them down) but I never had that. I was always involved sports, playing outside, doing flips off the couch and getting crazy in the living room, so my mom started calling me “Lil’ Heathen.”

JS: He’s an accomplished dude, he’s talented and we’re excited to fight him.

AG: You have fought some of the best fighters in the world and now you finally get a shot at one of the all-time great champions in MMA history, you have to be chomping at the bit to get after him?

JS: It’s great timing. Every situation and every fight has its own timing and I really feel this is my time. He’s a tremendous talent but my night is going to be ginormous — it’s going to be great. We’re excited for this type of matchup because when this fight comes up people will be on the edge of their seats and we’re looking forward to landing some damage on Aldo and putting him into some sweet dreams.

AG: Are you going to be the one to finally put him into retirement?

JS: You know that’s not my problem. Whatever he decides to do after that, that’s on him. We’re just gonna go handle business.

AG: You mentioned earlier this is your time. I was watching your profile on the show “The Road to the Octagon” and your coach Eric Del Fierro said when you turned 30 you realized that you belong, what clicked for you?

JS: Just the amount of experience I have in the octagon, in the gym and just in life in general. There were a lot of times where I was chasing some other coaches outside the box and I really wasn’t giving 100-percent of my time and commitment to Alliance. It was like I sat here at 30 basically, and once I let go of all the distractions and committed 100 percent to Eric it really allowed him to kind of take control and for me to show up, go on a schedule and to put in the hard work. The things I have been learning through those other coaches as well has always helped me. It’s always known in the bank to be learning, growing, adapting and adjusting, especially in this sport if you want to survive, let alone just in life.

I think Charles Darwin said it best when he said, “It is not the smartest or the strongest, it is the person that is willing to adapt to change that will survive the longest.” You have to be constantly growing, getting better and once I cut ties with a lot of bullshit I wasn’t at tug-of-war with myself. It allowed me to go in there and handle my job with a clear free mind and react the way that I do knowing I’m in tremendous shape and I have experience in the bank.

AG: You also mentioned in the video that sometimes you can see fear in an opponents eyes. Did you see that in Josh Emmitt or any other opponent you have fought?

JS: I’ve seen it in a lot of people … it’s just something that I have that’s always in my back pocket. When I hit people it’s a different feel and people think they have a grip on it but I know when I hit people, no matter where it lands — whether it’s on the arms or elbow, you’re going to feel it. And that’s always in their mind, like “Damn, I don’t want to get hit by one of those.”

So I can see it when I do land one on people, like the one (I landed) on Emmitt — either they go out or they go into a place where I can just keep attacking like a barrage. I have that killer instinct like a shark — once it smells blood I’m just gong to rip and try to tear you to pieces until the ref pulls me off. I’m there to do my job and that’s my style, its pretty raw.

AG: What athlete did you admire growing up?

JS: I would have to say Mike Tyson was one of the first guys that I watched that I could relate to right away. Growing up when I started watching UFC tapes it was Vitor Belfort, how he would devastate people and explode on them with pure athleticism, aggression and heart. I could really relate to that, but I do it naturally.

Ringside: Stephens began his amateur career at 16 and started training full-time by 18 years of age. Making his promotional debut in the UFC in 2007, the 31-year-old Stephens has earned nine UFC performance bonuses including five Fight of the Night awards since losing that opening bout. Although 19 of his 28 wins have come via knockout, Stephens believes his all-around skills as a mixed martial artist will conquer any strategy his opponents bring into the ring. Said Stephens, “I’m pretty confident every time I get in there that if we’re going to exchange or you’re going to try to implement a game plan that I have a solution to all of your problems. You know there’s not a spot or situation that I really haven’t been in inside the octagon — I’m comfortable there and I’m dialed in. And I’m there to execute. I’m there to take you out and I’m there to take you out at all cost. I’m dangerous for anybody and it’s always just one punch away from it being sweet dreams.”