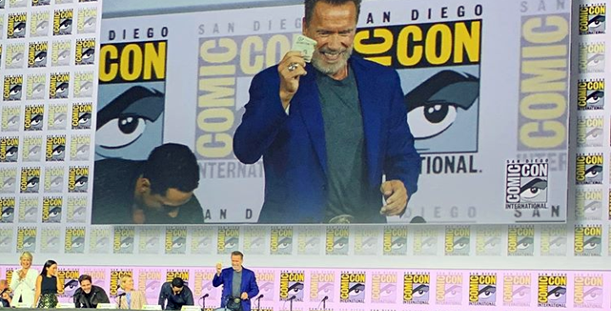 The first day of San Diego Comic Con International is always filled with excitement and anticipation. Of course every day is exciting but the first day gets attendees a glimpse of how extensive it all is both inside and outside the Civic Center downtown.

At the Indigo Room at the Hilton Bayfront, the morning began with a panel discussion and Unreal Gaming headed by Sinclair Fleming. The ideas and magic of what we see on the screen is discussed along with what is to come in the future. The technology that is used in almost device we use today comes from the creativity of those who are bold enough to continue learning.

SyFy brings their cast for a look at the next season of their hit series Van Helsing. Moderated by Bevin from the magazine Den of Geeks, the cast includes Kelly Overton, Jonathan Scarfe, Christopher Hyerdahl, Neal McConough, Jennifer Cheon Garcia, Tricia Helfer, Aleks Paunovic, Keeya King and Nicole Munoz. Showrunner Jonathan Walker also tried to keep secrets together and executive producers Chad Oakes and Michael Frislev talking about their excellent cast. Also, a teaser about what is to come and let me tell you – it’s pretty wild!

Netflix brought their own original series with The Order along with the cast. Their first time at Comic Con with Jake Manley, Sarah Grey, Adam DiMarco, Devery Jacobs, Thomas Elms, Katharine Isabelle, creator Dennis Heaton, writer Shelley Eriksen and returning to the state is executive producers Chad Oakes and Michael Frislev. From the moment they stepped on stage it became clear that these castmates have created their own ‘family’. Their sparring and stories are funny and bring a heart to an otherwise crazy series. The attendees were given a treat of a script reading and it was riveting to watch the actors right in front of us.

From Amazon Prime and creators Kate Purdy and Raphael Bob-Waksberg is a series that is bound to capture attention with Undone. Rosa Salazar plays Alma, a young girl dealing with the mystery of her father’s death. After an accident brings visions that bring her the ability to deal with time and space. It becomes a difficult time for the young girl as it begins to show a strain in the way she handles the people in her life.

Stumptown is a new drama based on a graphic novel by Jason Richman as Cobie Smulders plays Dex Parios, ex-military turned P.I. has a lot going on in her life. All of it gives her an edge that isn’t always popular with local law enforcement. Cast members Jake Johnson, Michael Ealy, Camryn Manheim, Tantoo Cardinal, Cole Sibus and Adrian Martinez join on stage to discuss what viewers can expect from this ABC show.

Ballroom 20 had its share of cool offerings with the Exclusive Screening of Evil that takes a closer look at the mystery of where evil comes from and can be found on CBS this fall. The CW this fall will bring Nancy Drew who is a young detective living in Horseshoe Bay and after a bit of time away from detecting, finds herself back in it when a local crime needs her expertise.

Arnold Schwarzenegger brings the hall down when he takes the stage to talk about the upcoming film TERMINATOR: Dark Fate. Of course the audience is completely under his spell along with the cast and the return of Sarah Connor played by Linda Hamilton That isn’t the end of the surprises when James Cameron makes his big screen appearance with a little more information about the film and a certain kid who has grown up in the Terminator world – John Connor.

Marvel’s Agents of S.H.I.E.L.D. gets its first inside look at Hall H along with cast including Clark Gregg, Ming-Na Wen, Chloe Bennet, Elizabeth Henstridge, Iain De Caestecker, Henry Simmons, Natalia Cordova-Buckley and Jeff Ward. Joining in on the conversation is executive producer Maurissa Tancharoen, Jed Whedon, Jeff Bell and Jeph Loeb. The discussion is lively and the director of where the show will be going is touched upon and, what makes me always smile, is the actors trying not to give to much away. The series airs on Fridays from ABC.

That’s enough of what is going on indoors, let’s visit the outdoors because there is something for everyone. In the parking lot across from Petco Park is family fun provided by the Twilight Zone and Sponge Bob just to start. Pepsi has brought an amazingly huge unicorn to give you direction along with a cool sip of their product, a ball pit for the kids and a few photo opps as well.

Spongebob Squarepants has a cool set up with bubbles and sunglasses for all. Of course the awesome Spongebob car is something to sit in and behold. There is food and fun for the whole family and I can almost predict that this weekend, this family spot is going to be the place to hang out.

FX is getting ready with their display of fun from It’s Always Sunny in Philadelphia to the next installment of American Horror Story. Across from the Convention Center is the set up for Detective Pikachu, Shazam!, Brooklyn Nine-Nine and, of course, The Walking Dead. Now you know I’m not about to miss that. In between all of these set ups is so much more to explore and most of it doesn’t require a SDCC badge! That’s the best part of all!

So with Day Two only a few hours away, I’m charging up all my electronics! Keep up with us here at www.militarypress.com!