‘The Puppy Who Knew Too Much’ 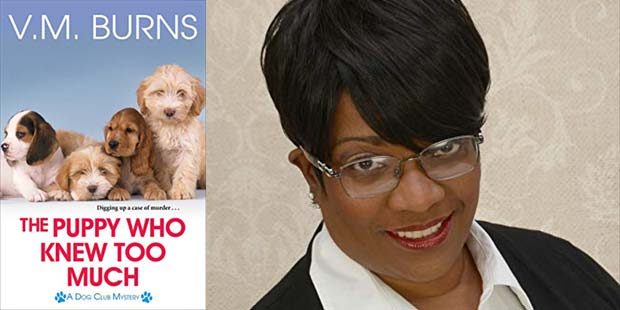 “The Puppy Who Knew Too Much” by V. M. Burns is a dog lover’s delight. The three dogs in the story will make readers laugh and sympathize with the main character, Lilly Echosby. Beyond the dog antics the story has a good mystery with many twists and thrills.

Burns bases the character dogs with her real-life ones.

“I have dogs, toy poodles, and I just love them,” Burns said. “This is why I had the protagonist Lilly adopt a little black toy poodle, Aggie. She named her after her favorite writer, Agatha Christie. A couple of years ago I adopted toy poodles and named my dog after my publisher Kensington. Her name is Kenzie, who is 4 years old. A lot of Aggie’s antics are drawn from my real-life experiences. I wish I could say Kinsey is better behaved than Aggie but she is not. I have gone through a lot of situations that my characters have gone through without the murders of course. I thought what would happen if… For instance, my dogs like to dig when we are out for a walk. I wondered what would happen if they dig up a dead body.”

It appears that Lilly is a murder magnet. The first book in this series has her in the middle of a divorce when her husband is killed. She becomes a person of interest and a widow in that moment.

Now, in this second book, she is also a person of interest when murdered bodies seem to pile up around her. First, her dog Aggie digs up a buried body and then her neighbor is found dead. It seems she cannot catch a break after moving from Indiana to Tennessee to be closer to her best friend, Scarlett “Dixie” Jefferson.

Having the perseverance to move forward, Lilly finds a new house, new job, and new people in her life. She is thrilled when her attorney daughter Stephanie and her current boyfriend, detective Joe Harrison, agree to come down and spend a week with her. Joe hires TBI investigator, Dennis “Red” Olson to keep the daughter and mom safe and to get to the bottom of the murders.

This delightful cozy mystery combines murder and mayhem, with a healthy dose of humor, friendship, and intrigue. Adding icing to the cake is the role the dogs played in solving the mystery.