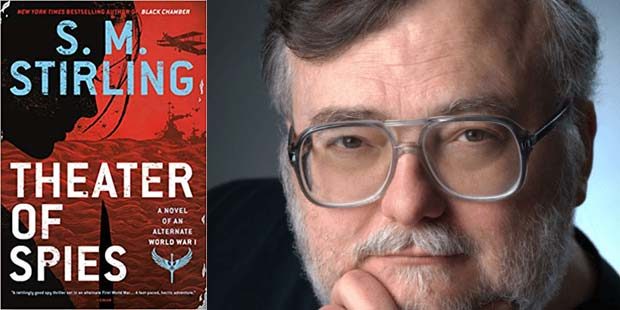 “Theater of Spies” by S.M. Stirling brings back U.S. operatives Luz O’Malley and her love interest Ciara Whelan. They are sent to Germany to find out about a new weapons system the Germans have developed. These American secret agents are the only thing between the Germans winning World War I and the Americans being able to foil them.

“I wrote my intelligence operatives going deep-cover inside Germany to find it,” Stirling said. “An early, primitive form of radar was discovered by a German scientist in 1903, who hoped to use it to prevent ships colliding in darkness and fog — like many inventions of the time it had problems getting funding.  In my alternate history they develop it further, and it’s code-named Projekt Heimdall after the Norse deity who could see through darkness and cloud: the Germans were terrible at picking code names that actually concealed things.”

This second book in the “Black Chamber” series has less action and more intelligence methods as well as the relationship factor between Luz and Clara. Besides having to infiltrate a German plant to find secret plans, they must evade the German agent, Horst, code-named Imperial Sword who is seeking revenge. In this alternate history Teddy Roosevelt is president and the U.S. has entered the war a lot earlier than in actuality.

“In my universe President Taft, who was grossly overweight, has a heart attack in 1912, and the Republicans rally around T.R. and his Progressive agenda, sidelining the conservative Old Guard faction,” the author said. “T.R. was much more popular than Woodrow Wilson, and without a split in the Republican vote would almost certainly have won an overwhelming victory. The establishment was terrified of him because of his radical ideas, and they basically stole the nomination from him by ballot stuffing, crooked delegate selection and other dirty tricks. He then formed the Progressive Party nicknamed the Bull Moose Party, which pushed Taft and the Old Guard Republicans into third place. Wilson was elected with 42 percent of the vote, T.R. got 37 percent and Taft won 25 percent. The only time in our history where an Independent won second place.”

This spy thriller has two very engaging women protagonists. Readers will have fun seeing the game of espionage played on a very dangerous court.