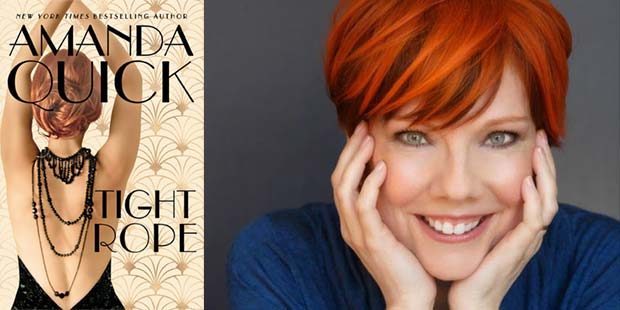 “Tightrope” is a fabulous mystery, typical of what readers have come to expect from Amanda Quick, also known as Jayne Krentz. This action-based plot has secrets, betrayals, Hollywood actors, circus characters, spies, gangsters and a sweet romance, although the focus is more on the suspense than the romance.

The plot has Amalie Vaughn putting the past behind her, especially the recent attack from the Death Catcher, a serial killer who targeted trapeze artists. She decides to remake herself by moving to Burning Cove, California. Using her entire inheritance, Amalie buys a mansion with the intention of turning it into a bed-and-breakfast. Unfortunately, she learns too late that the villa is said to be cursed after a noted psychic living there committed suicide by jumping off the roof, and just recently her only guest, Dr. Norman Pickwell, is murdered by his robot invention during a sold-out demonstration.

Matthias Jones has been investigating Pickwell and discovers that the inn where he was staying has hidden clues. Jones is attempting to find a groundbreaking prototype cipher machine. He suspects that Pickwell stole the device and planned to sell it. But now Pickwell is dead and the machine has vanished.

After meeting Amalie during the course of his investigation, the two decide to form a partnership to solve the crime and save Amalie’s business in the process. They must decide if they can trust each other after he reveals his psychic gift that lets him know when someone is lying, which tends to make most people uncomfortable. The mystery that lingers throughout the book, can they find the cryptic machine before it falls into the wrong hands and will they allow their passion to develop into a real relationship.

This wonderful story is intense with a complex mystery that had a bit of everything including the glamorous world of the 1930s. Readers will be turning the pages to find out who is responsible for not only the murder, but the stealing of espionage secrets.

Elise Cooper: This is a bit of an espionage story?

Amanda Quick: Everyone heard of the Engima Machine. I realized there are hundreds if not thousandths out there. From all the information given I thought there was only a few. In the movie and history books they always talk about THE Enigma Machine, making us believe there are not many. Who knew it was a brand name going back to 1916. I thought how the cipher encryption would make a good story where it is something everyone searches for.

EC: Robots existed during that era?

AQ: Those living in the 1930s were crazy for robots. There was a whiz-bang 1930s type of feel. Interestingly, everything we worry about now they worried about back then including taking over different jobs. There was also the worry that the robots would take over and turn into killing machines just like in the movie “Terminator.” During that time, there were stories in science fiction, popular science magazines, and mechanic magazines.

EC: How would you define the genre of what you write?

AQ: I think the genre is thriller romance. The mystery is the bolts of the plot. I like crimes that can be solved by reasoning instead of DNA, a lot of technology and forensics. This includes crimes that are inspired by emotions like revenge. The core for this story is how a character was fired at the close of WWI because there was no need for their skills.

EC: What is your style?

AQ: I grew up on the Nancy Drew mysteries, so everything I write is romantic suspense. I like to write stories that feature women in jeopardy and women who help solve the crime. I also enjoy writing the psychic element. The beauty of these plots is that each twist in the relationship affects the suspense and each twist in the suspense has some impact on the relationship. To keep it fresh I will always have a new hero and heroine, but will take a peek at those previously highlighted in earlier books of the series. For this series, I will keep the background cast.

EC: How would you describe Amalie?

AQ: Sarcastic, resolute, optimistic and determined. She reinvented herself. As a Trapeze artist, she had an edge that allowed her to be cool under pressure. She was not the ordinary girl next door. From her unusual life in the circus she is now trying to assimilate into the “normal world.” I like characters that pull themselves up from some disaster and figure out how to move forward as Amalie has done. She keeps going no matter what life has thrown out at her. I had her speak in a dialogue similar to how Kathryn Hepburn spoke in her 1930s films, very flippant, and fierce.

EC: How would you describe Matthias Jones?

AQ: He is in the process of figuring out his life. His talent interferes with his ability to have friendships. Readers who have followed my “Arcane Society Series” will recognize the Jones name right away. I like that he had a psychic edge.

EC: Lies play an important part of this story?

AQ: I put in the quote, “Intent is everything in a lie.” I read somewhere that children figure out how to lie when they are about four years old. It is an instinct that is part of the human tool kit. Look at white lies that help to make society civil. Imagine what would happen if everyone went around and said exactly what they thought. Nothing is what it quite seems to be. I think putting in the movie element allowed for the feel because movies are also a gloss on reality. In this story, the characters looked for the real person underneath the façade we all wear.

EC: A heads up about your next books?

AQ: In January “The Vanishing” will be out, a Jayne Krentz novel. This is the first in a trilogy that focuses on the descendants of a small town that were victims of a government psychic experiment that went horribly awry decades ago. Next May the Amanda Quick book will be out that is titled “Close Up.” It is about a photographer living in California during the 1930s. Both these books as with all my books will focus on a murder.