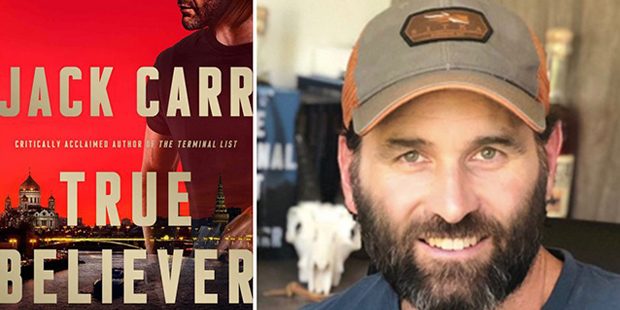 True Believer by Jack Carr begins where the first in the series, The Terminal List, left off. Former Navy SEAL James Reece still has his skills, cunningness, and unfortunately his brain tumor. The question throughout the first half of the book, what is he going to do with his life, while the last half is where the action ratchets up.

While sailing across the Atlantic, Reece undergoes an introspection of his life. He reflects on how he is now America’s most wanted domestic terrorist because he sought revenge on those in the US government who cost him everything he loved and cared about: his wife, their daughter, his teammates, and his career. He decides to head for an off-the-grid game reserve in Mozambique fighting poachers. When a series of events uncovers his whereabouts, the CIA recruits him, using a Presidential pardon for Reece and immunity for the friends who helped him in his mission of vengeance. From the hunting of poachers to the hunting of man, Reese travels the globe, targeting terrorist leaders and unraveling a geopolitical conspiracy that exposes a traitorous CIA officer and a sinister assassination plot with worldwide repercussions. Reece discovers behind all the plots is an ambitious Russian oligarch with ties to organized crime. Reece also uncovers that a series of recent terror attacks seem to involve another friend of his, Mohammed Farooq, who the CIA believes is working with the number one terrorist in the world, Amin Nawaz.

This second book allows readers to understand the thinking of a Special Forces warrior and what they do to keep  Americans safe.

Jack Carr:  It was inspired by something that happened when I was in Iraq in 2006.  I worked for the Covert Action Program.  During that intense time there, an Iraqi officer working with the Americans disappeared.  I decided to make it a lot more interesting by making him a terrorist using the skills taught by the US Special Operators Forces and our intelligence services.  My character would take those skills and turn them against us.

EC:  The first half of the book seems a bit different than the action-packed story of The Terminal List?

JC:  It does not have as much action in the beginning.  I think this story was a lot more in depth and much more complex.  There is some intense action, but probably more spread out.

EC:  Can you explain the “True Believer” quote at the beginning of the book?

JC:  It came from a Special Forces instructor after 9/11.  He talks about a “True Believer” that needs to frame our enemy, and that we are fighting our enemy on their home soil.  Who is the True Believer, the terrorist, the Iraqi officer, or the US forces?

EC:  The first chapter delves into the transition those serving need to make?

JC:  I had to make one from Special Forces to the private sector. A lot of guys have a hard time leaving the past life behind.  In the book, my character, James Reece needs to deal with the transition.  In the first book he abandons his principles to become the terrorist he was fighting, but in this book he learns to live again and find a purpose to his life.

EC:  You also talk about the rules of engagement?

JC:  You are referring to the book quote, “Tired of a bureaucracy that tied their hands with absurd rules of engagement and a system…that imposed harsher punishments on privates who lost rifles than on generals who lost wars.” There are military/legal professionals who make them up and then they are transferred to those pressing the trigger. People are put in a difficult position when the decision is second guessed by those that were not there.  The moral high ground must be maintained and is the first priority. But there is a need to understand it is warfare where things are not cut and dry.  The final decision makers need to make the right call, but they also need to be backed up.  I wanted to bring my experiences as a warrior to these fictional novels.

EC:  What about the poaching scenes?

JC:  I went over to Mozambique and talked to people on the ground.  Then last November I visited the Northern Cape of South Africa to teach an anti-poaching unit on weapons handling and running small tactical units using the skills learned as a SEAL.  I learned about the Rhino trade with the terrorist and trade implications. It was quite an eye opener that I was able to weave into this story.

JC:  It starts with Reece recovering from his brain surgery and trying to figure out what he will do going forward.  The characters in the first book, Katie and Liz, will be back. The next book delves into the dark side of man and pays homage to Richard Connell’s short story “The Most Dangerous Game.”