WHAT WAS YOUR SERVICE CAREER PATH?

I signed up for the Marine Corps on July 29, 1948 and within a week, I was raising my right hand at the induction center and two days later, put on a train with a bunch of other recruits and sent to Marine Corps Recruit Depot in San Diego.

While I watched other recruits struggle with the physical challenges of boot camp, I did not. I was in good physical shape from my two years of hitchhiking around the country searching for odd jobs and was used to walking long distances when I couldn’t get rides. The work I found was back-breaking, but it also laced my thin frame with strong, flexible muscle. So if any of my drill instructors (DIs) told me to drop for 25 push-ups, no problem.

But what I wasn’t ready for was the strict discipline and the harsh penalties for slowness or inability to accomplish tasks like marching and rifle drills. I also had trouble with our DIs yelling at us like we were the lowest living thing on the earth. Worse was my having to do what was told of me without question. If any of us were slow in getting the point, our senior DI, Staff Sgt. Chatham, would not hesitate to ‘clobber’ us until we totally understood what point he was making. Toward the end of boot camp, however, I saw how he and the other DIs had shaped raw, fumbling civilians into tough Marines. As I stood proudly on graduation day, I silently thanked them for helping me get there.

When I got out of boot camp, my entire recruit platoon (Platoon 72), along with other Marines already at Camp Pendleton. CA, were assigned to the newly reactivated 1st Provisional Marine Brigade. Within days, we were loaded onto the troop ship USS General W.F. Hase and taken to Camp Witek, Guam. The trip to Guam seemed like it would never end but finally, after 31 days and 30 nights of sailing rough seas, we set anchor and stepped onto the island that would be our new home.

We were taught infantry tactics at first and then continuously ran field training exercise to refine those skills. We were also taught survivor skills by Master Sgt. Potter, a World War II Bataan Death March survivor. He was a tough old guy who earned our respect for what he knew and what he taught us. Our company commander was Capt. Robert Bohn, who retired a Maj. Gen. in Sept. 1974.

Sixteen months after arriving on Guam, Typhoon Allen ripped through Camp Witek, destroying everything standing. The entire brigade was shipped back to Camp Pendleton where we continued training.

A couple of months later, on June 25, 1950, North Korea attacked South Korea, crushing its army and within a couple of days captured Seoul and was moving rapidly down the Korean Peninsula. Among the casualties were some of the 481 American military advisors. To stop the onslaught, the United Nations rushed in military forces from 16 member nations. Our unit, the 1st Marine Provisional Brigade, left Camp Pendleton in mid-July, boarded ships in Long Beach and San Diego and landed at Pusan, South Korea, on Aug. 3, 1950. For the next seven months I found myself in combat nearly every day. 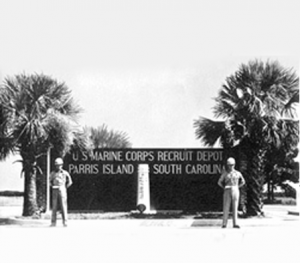 When I left Korea, I was sent back to Arkansas to finish off my enlistment at the Shumaker Naval Ammunition Station near Camden. But that’s when the Marine Corps pulled a fast one on me. They involuntarily extended my enlisted for one year and sent me to Parris Island, the land of sand fleas and reptile-filled swamps. Surprisingly, it turned out to be a highly rewarding and character-building assignment.

I was made a junior DI. I couldn’t help but remember how I had cursed my DIs when I was in boot camp and here I was, doing the same things all other DIs had done for decades, meaning I was tough on the recruits. But I was also fairer than most DIs.

When the senior DI was transferred, I took his place by default and graduated Platoon 431 by myself. Next I was given an even greater challenge. I had to turn a “slow platoon” of less than sterling recruits into Marines. With the skills I had learned from my DIs and what I had learned the short time I had been a DI, I managed to graduate most of Platoon 26. I was very proud of my accomplishment.

My superiors commended me for such outstanding work and asked me to reenlist. I thought about it, talked with others about it and thought some more about it. I could not make up my mind but finally came to a decision. It was time to move on to new adventures. In August 1952, I passed through the front gate of Parris Island for the last time and headed back to Arkansas a civilian.