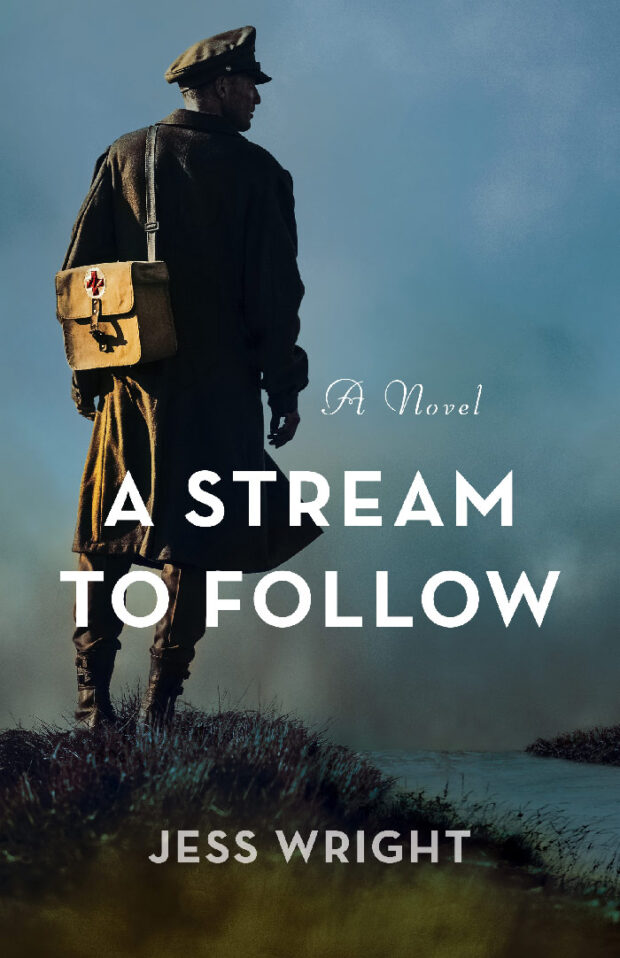 A Stream to Follow by Jess Wright takes readers to a small town in PA during the 1940s. The author shows the struggles of WWII veterans.  The plot encompasses family, romance, medicine, and fly fishing.

Dr. Bruce Duncan returns to his home in Pennsylvania after experiencing, as a front-line surgeon, the horrors of the Germans. His brother, Glen, a decorated fighter pilot, is facing his own battles.  Both brothers have PTSD and must overcome their experiences. Bruce is also fighting a friend who is trying to stop him from uncovering the dangers at a local plant where silicosis is killing the workers.

Bruce is also struggling with love, trying to decide between an English woman he once desperately loved, and a strong woman doctor in his hometown of Pennsylvania. Both women are strong, driven, and educated who must deal with societal constraints.

The plot shows the challenges The Greatest Generation faced after WWII. Readers face the feelings of respect and empathy as they share with the characters their trauma, hope, and forgiveness.

Elise Cooper: How has your background influenced this story?

Jess Wright: This story has been brewing in me for some time.  I am a medical writer, having written eight medical books.  I am also a psychologist, the director of the Depression Center at the University of Louisville. I have seen a lot of patients with depression, PTSD, and who are bi-polar. Right after Viet Nam I was a military psychiatrist and experienced those who had trauma issues. My father and uncle fought in WWII and became silent warriors with emotional scars. I wanted to tell a good story that was uplifting so I came up with this plot.

EC: Did you base your main character, Dr. Bruce Duncan on anybody?

JW:  In my research I read a wonderful book by Brendan Phibbs, The Other Side of Time:  A Combat Surgeon in World War II. I was not aware how much risk these front-line surgeons were under day in and day out. The ambulances with the Red Cross on them were like target practice for the Germans. I did not borrow but used his experiences to try to get a real authentic feel on what it was like to be a military physician during that era.

EC:  How would you describe Dr. Bruce Duncan?

JW: Quiet, determined, courageous, and principled from a small village in Pennsylvania.  He had nightmares and flashbacks after the war, now known as PTSD. He became a family physician. Being a part of the fight against the Germans, he became steeled to take on the fight against the employers of the plant where employees are dying of dust affecting their lungs. It is part of his character to not shy away from challenges.

EC:  How would you describe Amelia?

JW:  Bright, charming, and career oriented. Highly educated.  She has many conflicts in her life that include her family, her heritage, and the possible move to a small town in America since she is from England.

EC:  How about the character Dr. Sara Avery?

JW:  She graduated from medical school at a time when many women did not become doctors.  Even in my day when I went to medical school in the 1970s medical school was tough to get into.  The one I went to had six women out of 175.  Sara is strong-willed, bright, and attractive. She and Bruce are also attracted to each other.

EC:  How would you describe the relationship between Amelia and Bruce?

JW:  They both were very bright.  At first, it became just a wartime romance because she was English, and he was American. In wartime the love was inflamed and intense. She was from English aristocracy, so her dad put her under a lot of pressure to break it off. Bruce was wounded also by this emotional break-up, partly due to the class difference.

EC:  How would you describe Bruce’s brother, Glen?

JW:  He had a lot of traumas in his life. He was in a terrible plane crash in one of the missions over the English Channel and was burned very badly. He has a rough time in carving out a new life for himself.  He has an inherited propensity to bi-polar illness, mood swings. Military trauma can aggravate this condition. He has a triple threat of PTSD, alcohol, and bi-polar disorder.

EC:  Did the title, A Stream to Follow, have a meaning?

JW:  It is metaphorical.  Everyone needs to find a stream to follow, something that gives life meaning and purpose. If people commit to it their life gets better and they become satisfied, they have chosen a path. The themes in the book are finding purpose, sticking to a path, overcoming trauma, and finding solutions.

EC:  What was the role of fishing in the book?

JW:  I am a fly fisherman. I find it to be very soul satisfying and meditative. I saw it as a potential healing presence in Bruce’s life, to help put things in perspective.  Today, some VA programs have set up fly fishing for veterans with trauma.

JW:  I am thinking of writing a sequel so people can find out what happens to these characters.