A Thirty-Year Mystery Starts in the DARK WOODS 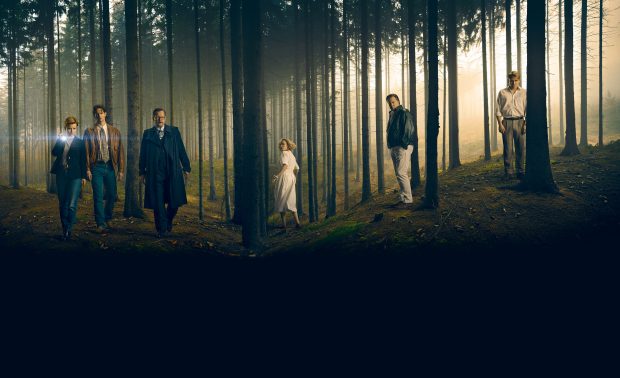 Coming to Topic from director Sven Bohse and First Look Media is a mystery that has spanned the years about what happened in the DARK WOODS.

Thomas Bethge (Matthias Brandt) is moving up in his position to the Head of the Hamburg State Office of Criminal Investigations. Wife Marianne (Jenny Schily) is pleased and so is sister Barbara Neder (Silke Bodenbender). Sharing the day with Thomas, Barbara who lives in Wesenburg, also shares that things are tense with husband Robert (Nicholas Ofczarek). Everyone knows he is having an affair and it is even affecting daughter Theresa (Janina Fautz).

Wanting a divorce, Barbara is going to make sure that it is not an easy one Robert. Finally, the two come together to talk one evening. By the next morning Barbara is missing! There is no trace of her, and the suspicion is immediately directed at Robert. The police are busy as they are dealing with the death of two couples in the forest outside of town.

Local Wesenburg police Anne Bach (Karoline Schuch) and Jan Gerke (August Wittgenstein) are investigating the deaths when they are notified about the disappearance of Barbara Neder. Their detective plates are literally running over as days turn into weeks with no sign of her all while piecing together what happened in the woods.

Becoming frustrated with the lack of care in his sisters’ case in Wesenburg, Bethge enlists the help of Anne Bach to keep him informed of what they find out and at the same time doing some digging of his own. He discovers that Barbara had met cemetery gardener Jurgen Becker (Hanno Koffler) at a party, and he had a record. They begin to ask the right questions but there are people standing in the way.

Becker makes it clear he had nothing to do with the disappearance. His edgy friend Heiner Mertens (Micro Kreibich) and wife Andrea (Nadeshda Brennicke) are protective of Becker and will no cooperate with police at all.

As the years pass, both Bethge and Bach are convinced that they know who is responsible and they still gather evidence. When year 30 rolls around, Bethge has retired, and Bach has moved on to becoming a negotiator. He asks her to join in the search once again and this time look even deeper into the original investigation and make it clear nothing and no one is going to get in their way.

If it is proof the authorities want, then proof is exactly what they are going to get!

Brandt as Bethge is a responsible and caring husband, son and brother. Working hard in his profession in law enforcement is something everyone in the family is proud of. He also cares very much for his family taking care of an aging mother, a busy family and a sister who is having martial problems. Being there for everyone is something Bethge has been relied on for. Once Barbara goes missing, Brandt gives us the intensity of a law enforcement officer whose hands are tied. He does not accept it (nor should he) and finds ways around to be a part of the search for his sister.

Schuch as Bach is a policewoman who is trying to make her own way in law enforcement. Shrewd, smart and into details, from the moment of the killings in the woods to the disappearance of Barbara Neder, she is as fixated as Bethge is. Schuch gives us a strong character who knows her job well and is determined to get around those stopping her from doing that job.

Wittgenstein as Gerke is her partner that does not have the same dedication to the job as Bach has and there are several reasons for it. Mainly, to my way of thinking, because being in law enforcement is the good ole’ boys club and she is not invited. There is also a connection between Gerke and Bach that he must fight through in order to do his job effectively.

Ofczarek as Robert is a husband who does the stereotypical thing and has an affair with his secretary. Trying to buy his way out of his marriage to Barbara, it is their final meeting that puts his life on hold and making is nearly impossible to prove his innocence. Ofczarek becomes a victim himself while waiting for Barbara to come home.

Fautz as daughter Theresa is not happy about the affair as she sees her mother struggling to come to terms with the end of the marriage. Making it clear that she supports her mother in all things, after Barbara is gone is when her own destruction takes ahold in her life.

Schily as wife Marianne stands by her husband and the rip in the family. Trying to make things easier becomes a full-time job for her to the point where she feels she needs to draw the line for the sake of her marriage. I think thirty years is a pretty good line! Bodenbender as Barbara gives us a woman who is dealing with the pain of being cheated on and then dealing with the process of divorce. Feeling she needs to get out in the world once again after scaring her family that she was falling apart, Barbara began to feel good again. Bodenbender gives us time to see the destructive Barbara and only a momentary glimpse of what could have been a happy Barbara.

Topic features North American premieres and programming from around the world, complemented by a diverse slate of Originals including documentaries, scripted comedies and dramas, discussion shows, and more. With exclusive TV series and film that take you to more than 40 countries, Topic showcases an unparalleled diversity of creators, perspectives, and experiences. They prioritize bold storytelling, champion underrepresented voices, and believe that entertainment should expand your view of the world. For more about Topic please visit www.topic.com.

The series DARK WOODS is based on the real events of the 1989 Gohrde-Morde when a people were murdered in the forest Die Gohrde. The case remained unsolved for over 30 years in the city of Luchow-Dannenberg, Lower Saxony.

DARK WOODS is a six-part mini-series that include The Disappearing, The Dark Force, The Double Decker, The Promise, The Forbidden Room and Forever and Ever. The story is told in German with English sub-titles.

The story is very complex taking on twists and turns that any investigation might run into. There are extremely complex characters and as the story begins to unfold, their story is told. It is up to the viewer to put the pieces together and decide who is lying and who is telling the truth before the final episode where it all comes full circle – even if it took thirty years for that to happen.

The dedication of Bach and the determination of brother Bethge give us a reason to cheer that no matter who tried to get in their way, the truth is more important. The irresponsibility of their superiors is enough to drive everyone to curse but Bach and Bethge let those watching know that the answers are there, and they will find them.

DARK WOODS is a well thought out and extremely well done series that explores human nature and the woods are not the only thing that is dark.

In the end – they refuse to stop!