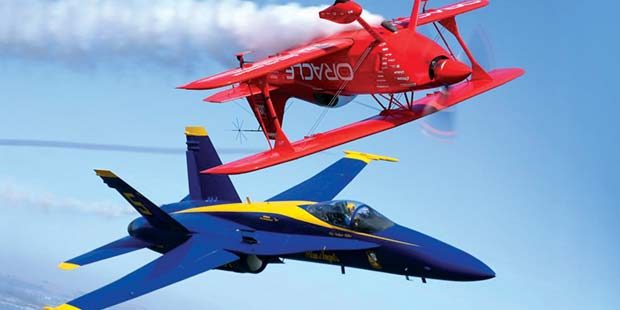 Marine Corps Air Station Miramar is home of the 3rd Marine Aircraft Wing and the largest military air show in the nation. This year’s air show is scheduled from Sept. 22 — 24.

The theme for the 2017 MCAS Miramar Air Show is “A Salute to Vietnam Veterans.” The Air Show is not only an open door to the local community, but it also provides an opportunity to recognize and honor the tremendous sacrifices made by Vietnam veterans. Their service was largely underappreciated during a time when support for the military was not as prevalent as it is now. Nevertheless, these brave men and women demonstrated their character and values by donning the uniform and serving the Nation they love.

The U.S. Marine Corps provided ground, air, supply, and logistic support in the Vietnam War for over two decades as part of III Marine Amphibious Force. Initially in Vietnam as advisors, the Marine force grew with the need to protect the key airbase at Da Nang. After the Gulf of Tonkin incident, more troops arrived and the Marines began to engage in the counterinsurgency effort with small-scale pacification units. Combined Action Platoons — comprised of U.S. Marines and Vietnamese soldiers — were a novel concept that the Marines introduced. Marine rifle squads went to rural communities with platoons of Vietnamese Popular Forces, proving to be one of the most effective counterinsurgency tools developed during the conflict.

By 1966, there were nearly 70,000 Marines in Vietnam carrying out large scale ground operations against the Viet Cong. In addition to ground combat, the Marines Corps provided air support from helicopter squadrons and fixed-wing aircrafts striking targets in South and North Vietnam. In 1967, the Army leadership in Saigon advocated that the Marines concentrate their efforts on large unit search and destroy operations. The Marines’ mission was split, with fighting against the North Vietnamese Army along the demilitarized zone (DMZ) toward the north, and a counterinsurgency operation waged against the Viet Cong in the villages in the south.

In the north, the Marines engaged in heavy fighting between Khe Sanh in the West and Leatherneck Square in the Eastern DMZ. They also began to create the McNamara line, a series of strong points, sensors and obstacles meant to detect communist forces crossing the DMZ. The North Vietnamese focused much of their firepower on destroying the McNamara line in its early stages, resulting in many conflicts, most notably Con Thien. The McNamara line ultimately failed to materialize, but the Marines were largely successful in stemming the flow of communist forces across the DMZ, although at a large price. 3,461 Marines were killed in action in 1967 and another 25,525 were wounded. Despite the fewer numbers, it was clear that more troops would not guarantee more success.

The year 1968 proved to be a watershed for the Marines in Vietnam. The Jan. 31 Tet Offensive — the massive offensive the North Vietnamese launched against South Vietnam in 105 cities on the Tet Lunar Year — was largely repulsed by U.S. Marines and South Vietnamese forces. This was not the case at Hue, a city where Marines fought for 26 days before expelling the North Vietnamese. The Marines also defended Khe Sanh in a 77-day siege, under fire by as many as 1,000 shells per day, until the U.S. Army’s 1st Cavalry Division broke the siege.

Marine advisors, fire support personnel, and air units fought during the 1972 Easter Offensive supporting the Vietnamese Marine Corps. A peace treaty was signed in Paris in January 1973. The U.S. agreed to withdraw all of its forces from Vietnam; the North Vietnamese returned its U.S. prisoners of war, 26 of whom were Marines. In 1975, Marines led Operations Eagle Pull and Frequent Wind to evacuate the American embassies in Phnom Penh and Saigon. Immediately after saving hundreds of American lives in the embassy evacuations, President Ford ordered the Marines to rescue the crew of the USS Mayaguez, which had been taken by the Khmer Rouge. A joint task force completed the mission and recaptured the ship, but not without Marine and U.S. Air Force casualties.

We hope you join us at the Miramar Air Show to recognize the service and sacrifice from our Vietnam War veterans. Despite overwhelming odds both forward deployed and at home, these men and women performed their duties with courage and demonstrated their commitment to the United States. We take time this year to reflect on their sacrifice and to salute their service.