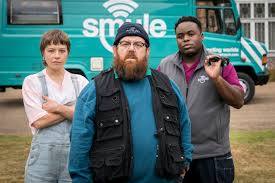 From brilliant masterminds Simon Peg and Nick Frost along with James Serafinowicz and Nat Saunders comes an eight-episode series about a paranormal investigating team who look for ghosts around the U.K. The panel moderated by Chris Hewitt of Empire Magazine gets the scoop.

Nick says what the show is about, “It’s about a man seeking – lets look at another clip! I think its about Gus, he’s lost I think and he’s looking for some truth in many aspects of his life. He gets put together with a lovely man at work and together they form a wonderful alliance and pick up lovely friends along the way.”

Simon says, “I think you have to not make fun of the horror. It’s fairly easy to parody something and you can fold your arms and go ‘naaww’.”

James “We started talking about this, me and Nick, along time ago. We’ve always been interested in ghosts and UFO’s and all paranormal stuff. We are always texting each other stuff we’ve seen. So we thought how could we harness our obsession with the paranormal with the show. We started just talking about it. We tried to couple the world of fascinating broadband with ghosts”.

Nick, “Simon and I talked about how it would be cool to have a ghost hunting job. This has all been building for a while really”.

Influences are, for Nat, “A mixture of X-files and pulling from different places and like Simon was saying we wanted to take the horror seriously and make the comedy funny. There might be things that you recognize from films and other television shows but hopefully we have put a spin on them and add some laughs to it. James brought this collection of leather paranormal books and we spent hours pouring over these books looking. There is spontaneous human combustion and an old ladies foot charred in a  fireplace.

Simon, “I thought it was amazing that those images of people who died of spontaneous human combustion but they were always near a fire. There was always a telling thing next to a fire or something.”

James, “They were always these silly names of people Arthur C. Clark and mysterious powers.”

Pegg, “There are a couple of good scares that you might find in a horror movie that look real but they are not.”

The character Gus is a YouTuber, “Gus with his YouTube he just likes it and not bothered about followers. He is desperate to be taken seriously but Gus is alone. He lost someone very close to him and his love of the paranormal came from her and when she died he picked up the reigns so to speak for a chance to see her or hear her again in another realm. That’s his drive, he has to get up and go.”

Simon as Dave is Gus’ boss, how is that, “I was the one deal breaker for me in playing Dave is that I wear a terrible wig that made me look like a mannequin. There are reasons for everything in TRUTH SEEKERS and there is truth behind every façade. It was a lot of fun. He is relentlessly positive. I crop up in a few scenes every episode and gives Gus their assignment for the episode which is usual to install broadband somewhere. He works for a company called Smile, a multinational broadband provider which may or not be nefarious in their deeds.”

What was it like reuniting on this? Pegg, “It was alright”.

The old time horror show feel to it says James, “There was going to be a lot of practical effects versus CG. We looked for haunted places, and even the lens’ were used on Return of the Jedi and Raiders of the Lost Ark. It’s got an old feel and there is something really authentic about it”.

“It’s always fun, its like coming home. I always feel cozy when we are on set together. It’s very easy. I didn’t do my bits till the end of the shoot so Nick and the gang were very much ensconced and it was like walking into a new school. Him being there made it very easy. It’s my baseline.”

Nick, “It’s like wearing an old pair of pants and sliding right in. It’s always nice to have Simon on set. It’s always nice to see him. I love to look on the call sheet and see that Simon is in because you are always going to have a laugh and chat and work with my best mate.”

There are other characters like Elton, Malcom McDowell, Emma Darcy who plays Astrid, Susan Macoma as Helen playing an agoraphobic slightly tense sister of Elton’s character – everyone is great says James. Doing strange and weird roles is something they are proud of and won’t say more because they want it all to be a surprise. “Everyone bought into the spooky, creepy fun of the show and brought something special to their part”.

Nat, “It was a joy working with Malcom McDowell to listen to his stories.”

Pegg, “Me and Malcom bonded over Star Trek and he told me a funny story about William Shatner from Generations. It’s not repeatable.”

Nick on stories on the set, “Once Simon came in we did some comedies. We got to shoot in great places. There was a ladies house with a Tudor interior and we shot a lot of stuff there.”

James, “We shot in a bio-lab once and the terrifying chilling clinical cages and gas chambers within was strange.

Simon and Nick went ghost hunting, did you find any? Simon, “We’d go to an Abby or church and knock on the door saying ‘hello ghosts’.

Nick, “There was a place where a bell rang constantly and there have been a lot of thing. The one where we found the station in the forest.”

Simon, “It was like we stepped into this unknown world. It was like Brigadoon, it just appeared”.

Nick, “It was just waiting for us”.

Simon, “Nick knocked himself out and I left him there, he’s never forgiven me for it. I thought he’s really committed to it. I left and he came knocking on the door saying ‘You left me!’.”

Do you believe in ghosts and the paranormal?

Pegg, “No, well I believe in aliens but if an alien died I don’t believe he’d come back as a ghost. Nick and I went to Area 51”.

Nat, “I believe in UFO’s and aliens. A friend and I saw a UFO landing at an airbase and we recorded it as proof and found out if was an FO”.

James, “I’ve seen a UFO. Me and my friend and these two girls went down to the beach to look at the moon and it was all overcast on the sea and couldn’t see anything but this big shining light. It was almost like it was strobing and lightening up the sea. It went faint and then came right back and went over our heads. It was like a big rectangle and had domes on the side and lights. Not only did I see it but all the people there saw it. It was a shared experience. That’s why I believe in it.”.