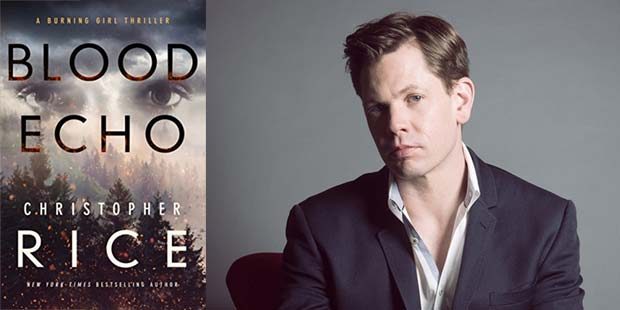 “Blood Echo” is the second in a series about a sometimes-super human who pursues serial killers. These books are not the typical straightforward thrillers, but do have some traces of sci-fi aspects. As a victim herself, Charlotte “Charley” Rowe wants justice and vengeance against those who perpetuate violence by working closely with the CEO of a pharmaceutical company, Cole Graydon.

The book opens with intense action. Charley is pursuing a serial killer and after capturing her prey she returns to Altamira California to rest and meet up with her friends and lover. But her peaceful R & R is interrupted when it becomes obvious something sinister is happening. The girlfriend of one of the town’s richest developers is accused of criminal activity. A vast and explosive criminal conspiracy is developing in Altamira. As the fate of Charlotte’s hometown hangs in the balance, and everyone she cares about is in danger, she has no choice but to use her powers to go after the bad guys.

Anyone who has not read the first book might want to in order to understand the back story. Charlotte was kidnapped and raised by serial killers until she was rescued. Known for being “The Burning Girl,” she has no peace and quiet. She has become an experiment, gaining superpower strength after taking the drug Zypraxon. This enables her to go after the evildoers, ending their violence. Knowing she can literally rip someone to pieces she tries to control it, preferring to capture and have them punished then to kill them.

The author writes this cast of characters as very complex and unique. It is a fascinating read where people will not want to put the book down.

Elise Cooper: Do you plan on having this series go on for a while?

Christopher Rice: I have planned out the major complex and dramatic events. If sales fall short, usually a series has to wrap up quickly. I do love these characters and I hope to explore them in a lot of different books over the years. I hope the series goes on for a long time because there is a lot of life in Charley, her relationship with Luke, and the small town. These books will not have a straight cookie-cutter formula, but Charley will always have a fundamental need for justice and vengeance.

EC: Was the town Altamira California made up?

CR: Yes. It is completely fictional. Charley will return home to this town and the cast of characters. I drew upon it from reading small town romantic novels. Since I hang out with vampire serial killers while writing the TV series I love to come around at the end of the day and read. There are a lot of very well written romantic books that I enjoy.

EC: This book seems a bit different than the first one in the series?

CR: I was trying to get a gender swap for the protagonist. I did not want her held back by the male characters. She did a lot on her own because her boyfriend, Luke, has a temper and is quick to emotion. In the first book, she had a lot of help, and in this one she is more on her own. I wanted to make sure readers see female empowerment. She emerges from the first book as a master over her own fate. This story allows her to be the one to rescue her love interest. She gets to do what men have done time and again in a way a man would.

EC: How would you describe Charley?

CR: Confidant and determined. I did not want to write her as the female Incredible Hulk. The drug she takes to give her superpowers only lasts for three hours, after that she returns to a sense of normalcy. She questions when should she take the drug, how to use the power it unleashes, and should she take it?

EC: Is this similar to a comic book?

CR: I will embrace that comparison. I would compare it to the Avenger series that has deeply human relationships. There is also an organization that has no bounds.

EC: How would you define your serial killer characters?

CR: I think many of the jailhouse interviews of them were based on lies. Ted Bundy tried to blame pornography for his actions. The term for this kind of argument is “mistaking correlation for cause ability.” As a writer, I like to speculate on what really makes a monster tick. I read a book about the Night Stalker, Richard Ramirez, who killed a lot of people in a short period of time. Right after his arrest he told how he waited until 2 AM because people were asleep. He did not have the attitude ‘I am a victim,’ and did not commit these crimes because he thought of himself as a victim. I think the reasons for killing are simplistic, like a Great White Shark.

EC: Then there are the survivors?

CR: I am more interested in the survivors than the killers. This includes Charley’s world. She and the developer of the drug, Dylan aka Noah, now have a sense of rage. They feel there will never be closure when someone close is taken away by a murderer. These survivors are working their way out of the darkness created by the killer.

EC: How would describe the CEO Cole?

CR: In book one he was motivated to have a major scientific breakthrough for his company that allows him to outshine his father’s legacy. In book two he is working much closer with Charley as she gets to know him as a person. Readers are wondering if he wants to make amends with Charley and is he a more noble and sympathetic character. Remember in book one he was seen as controlling and manipulating.

EC: How will the relationship with Charley and Dylan evolve?

CR: Charley’s single biggest challenge-can she forgive Dylan for initially giving her the drug without her consent. She received the power, but was never explained the enormous risk. Everyone before her who took the drug literally tore themselves apart. I think Cole-Dylan will work together much sooner than Charley-Dylan. Their journey will be a longer arc.

CR: I am on #bookstagram, which is a part of Instagram. I think a large part of this series’ audience had to do with this community. I am very thankful to them and have become one of them. It is great to see how people love books.

CR: Charley and Luke will have a solid relationship. The team will come together and will know everyone’s role. Luke’s role is emerging and readers will find out what it will be in the next book. There is a pursuit of a serial killer and the plot is all about the hunt.