‘Bones Behind the Wheel’ 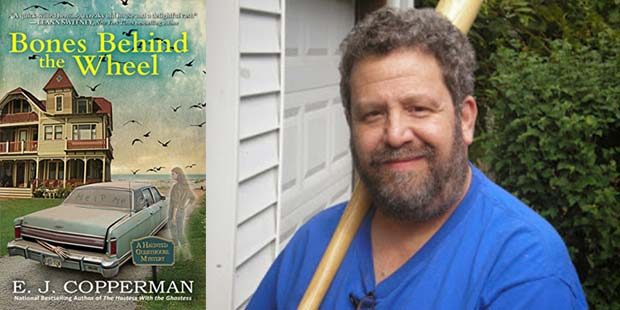 “Bones Behind the Wheel” by E. J. Copperman blends a mystery with plenty of humor. It is a ghostly tale that will keep readers smiling throughout the story.

“Some people believe the dead continue to exist in some way and others believe it is silly,” Copperman said. “Everyone wishes they could experience the presence of those who have passed away. Those that do believe in ghosts think that they can communicate with their lost loved ones.”

In the first book of the series, Alison Kerby has purchased an inn on the New Jersey shore. But she got more than she bargained for after finding out it came with some ghosts. This haunted guesthouse included Paul Harrison, her resident ghost detective and Maxine Malone, a twenty-eight-year-old budding interior designer until she was poisoned. The only ones that seem to be able to communicate with the pair are Alison, her mother, and her daughter.

“I based the ghosts on the old Topper series. They essentially exist to irritate the main character and push her into areas she does not want to go. I think Maxine is a bit self-centered and not very mature. She pushes Alison’s buttons more than anybody else. Paul is the complete opposite since he is cerebral, quiet, sensitive, and has a high regard for people’s feelings.”

Because Alison wants to devote herself to bringing guests to the Inn she has no time for detective investigations. Yet, she is thrown into it again after the exposure of a 1977 Lincoln Continental buried in the sand, behind Alison’s guesthouse, with a skeleton still belted in behind the steering wheel. The ghostly Paul is delighted he will have more investigative work. Instead of Alison he pairs up with her new husband, Josh, who is most interested in the case. He might not be able to see or hear the ghosts, but he’s found a way to communicate through texting. In probing, what happened with this Cold Case murder everyone in the Inn becomes endangered and the detectives must get to the bottom of it before someone else is murdered.

“I love writing humor into the stories. This is why I wanted to make sure I wrote Alison as a real Jersey girl who grew up at the Shore. She has a lot of attitude and will tell people the natural language of New Jersey is sarcasm. She speaks it fluently. I had a conversation with an editor who wanted me to write something serious. I do not have that muscle, nor am I capable of writing something serious. This is partially due to my own reading habits. It does not work for me to read something completely sober. I think my stories are comedies with a mystery surrounding it.”

The author does a good job with the dialogue. Alison’s sarcasm and quips will keep the readers spirits up. This character-driven story features amusing, quirky ghosts and a strong family connection.