BOOK REVIEW: MURDER AT THE CAPITOL 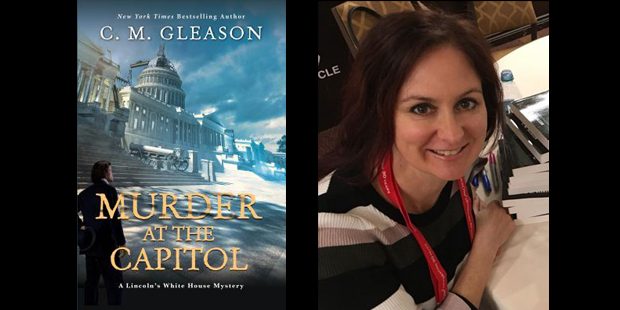 Murder At The Capitol by C. M. Gleason is a unique historical mystery.  With a superb ability to combine famous and admired historical figures with characters of her own, Gleason masterfully creates a suspenseful and informative story.  The characters created bring to life the Civil War era.

“It was suggested to me to write a story involving Civil War mysteries, basically to combine historical fiction with a suspense story.  The suggestion had Lincoln solving murders as President.  Instead, I came up with someone really close to Lincoln who would involve the President on the peripheries. I had to work around the fact that the Civil War was a dark and ugly time in American history. Each book is set during a certain number of days that took place during the Lincoln presidency.  I look at the historical documentation during those times.  For this book, I found out that there was a dome being put on the top of the Capitol with an inside crane. I immediately thought of a story with a body hanging from it.”

This third book in the series has want-to-be journalist Sophie Gates and Southern Belle Constance Lemagne sitting in the Senate Gallery waiting for a session to start.  As they look up they see a man hanging from the rotunda, the nearly completed Capitol Dome. Knowing immediately who to call, they send a messenger for Adam Quinn.  He is a frontiersman who has become a member of Abraham Lincoln’s security team and is an expert tracker.  Realizing that the placement of the footprints shows the man was murdered and had not committed suicide, he decides to investigate with the blessing of President Abraham Lincoln.

The sub-plots are just as riveting as the main plot. There is a Southern sympathizer in Washington DC who is running a female spy network reporting to the Confederacy, and she has an insidious plot to foil the Union Army’s march to Manassas. The story also delves into the life of Dr. George Hilton, a black man constantly in danger despite his status as a physician, because racists resent him performing autopsies on white bodies. He also assists the Southern belle and sympathizer, Constance, who desires his expertise to help save her father’s leg that was badly injured in a carriage accident. Readers will wonder if there is also a desire for Constance and Hilton that has romantic aspirations. Then there is Sophie who has befriended Felicity Monroe, a stunning young society woman whose upcoming nuptials are the talk of the town, but who has some deep, dark secrets.

Gleason noted, “He has high integrity and wants to do what is right.  I think he has simple wants, needs, and is a still water runs deep kind of guy.  There is also a subtle sense of humor.  Overall calm, loyal, and intelligent. Sophie is determined and very intelligent.  She thinks outside the box.  She does not want to be repressed and loves adventures.  To her, learning is important and she is very open-minded.  Sometimes she is stubborn and pragmatic. Constance has a Southern background upbringing. I think she has been sheltered intellectually but through the course of the series she will become more open-minded.  She is resourceful, attractive, manipulative, and strong.  In this book, she is catty and arrogant. Dr. George Hilton is very intelligent with a dry and wicked sense of humor.  He has a high sense of justice and is trying to fight his feeling for Constance. He has a thirst for knowledge. I based him on a real person, Dr. Alexander Augusta, who was a black doctor during the Civil War.  He was mentored by a Quaker physician that left him money to go to medical school.”

The author provides the reader with a view of what life was like for citizens at the beginning of the Civil War including some tidbits on President Lincoln’s thoughts and personal life. This well-written story has very engaging and interesting characters.  Readers await anxiously for the next installment.