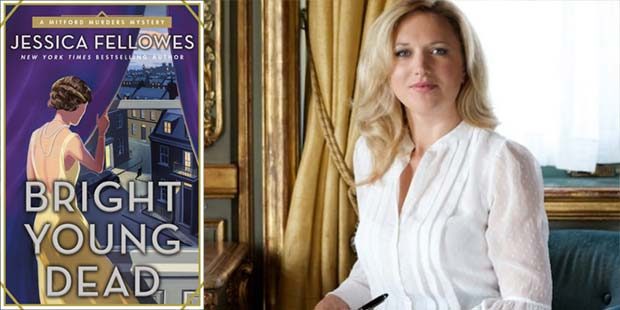 “Bright Young Dead” by Jessica Fellowes brings to life the mid-1920s amid a strong, who-done-it mystery. Fellowes known for writing the companion books to the “Downtown Abbey” TV series has used those skills to write a riveting historical novel. This is the second novel that delves into the lives of the aristocratic Mitford household during the Golden Age.

“I have been writing a lot of non-fiction and the ‘Downtown Abbey’ series of books,” Fellowes said. “I love this era and wanted to write a novel in it. I was approached by my editor who suggested I write a vintage crime series. My continuing characters Guy and Louisa were born.”

During a treasure hunt a murder is discovered. Arrested is one of the servants, Dulcie, of a guest since she was overheard having an argument with the victim. She had previously been associated with a gang of criminals known as “The Forty Thieves.” Lead by Alice Diamond this group shoplifts, robs the wealthy, and fences the stolen goods.

“I can’t remember exactly how I heard of Alice, but I was reading generally about the period, as I have done for some years now, and came across her story. It seemed to me immediately obvious that I had to use her in this book! Alice Diamond and the Forty Thieves were all the girlfriends of the Forty Elephants, a notoriously violent gang from South East London. Gang culture can be very pervasive when young people are looking for motivation and glamour to lift them out of their surroundings. Her story is a complicated one. She was born into a criminal very poor environment, where it was the norm for people to get what they needed in aggressive, illegal ways. That said, she was not frequently violent and her chosen method of getting what she wanted was shoplifting.”

Caught in the middle is Louisa Cannon, a servant in the Mitford household and a chaperone of the young adult daughters, Nancy and Pamela. She has become a good friend of Dulcie and believes she is innocent, determined to get to the truth of the matter. Intertwined is the relationship Louisa has with a young officer, Guy Sullivan, and his partner, Mary Moon. They have been assigned to go undercover and arrest her and the gang. During her investigation Louisa seeks the help of Sullivan, since there is a definite connection with the Diamond gang. Together they connect the dots to find the true killer and end Diamond’s reign of crime.

Readers will also enjoy learning about the 1920s era. The young society aristocrats are determined to have fun, going to dance clubs, becoming flapper girls, experimenting with drugs, and showcasing the latest fashions.

“I wanted to write about the reality of life for the upper classes before the Second World War, was that they largely shared their houses with servants, the working class. In portraying the Mitford sisters, there would be servants in the house and I wanted very much to include them in the story. As a servant in the nursery, my fictional heroine, Louisa Cannon, would be both up and downstairs, as it were, spending time both in the servants’ quarters and closely with the family. This meant we could have an insight into the workings of the whole house and all its inhabitants.”

The mix of historical fiction adds authenticity to the novel. The murder investigation allows people to understand the tensions between the upper aristocratic class and their lower-class servants. This story makes for a very interesting read.