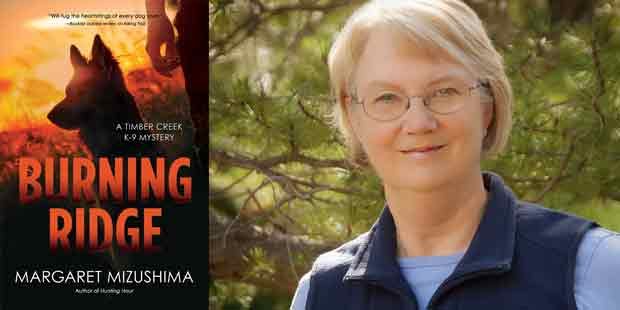 “Burning Ridge” by Margaret Mizushima is a fast-paced and engrossing police procedural. It features Matti Cobb and her K-9 German Shepherd partner Robo, which makes these stories appealing to not only those who enjoy mysteries, but also to animal lovers.

Having done her homework, the author spoke with and shadowed those that train dogs.

“I have a friend who retired from training tracking dogs,” Mizushima said. “She allowed me to watch her train for tracking and evidence detection. I was inspired by her to write about a female canine handler. In fact, she had a dog named Robo, which I based the story dog Robo on. He could do so many things: Patrol, apprehend, track and even pick up on gun powder to find hidden shells and casings.”

The plot has veterinarian Cole Walker and his two young daughters enjoying their trail ride in the Colorado mountains until they find a man’s charred boot with a decomposing foot in it. Called in to search for the rest of the body, Matti and Robo find him. It is then that Mattie realizes there is a personal link to her own troubled past.

This book explores her disturbed childhood, having been placed in foster homes since the age of 6. Her father was convicted of abusing her mother, who later abandoned her and her brother. This is why she and Cole are taking the relationship slow — although it is obvious they love each other.

Because her husband is a vet, Mizushima knows something about the profession. “I always wanted to write a vet as a protagonist. Similar to my husband, Cole is a mixed practice vet, which means he treats large and small animals. He has to overcome some personal problems after his wife left him and his daughters. Both he and Mattie are hesitant to connect because of their baggage with abandonment issues. This is why I wrote, ‘And as much as she wanted to, she had trouble allowing him past the wall she built to protect her feelings.’ He is a work driven, a type-A personality, but soft-hearted. She is kind, athletic, spunky, a loner, independent and vulnerable.”

What makes this novel special is the relationship between the partners. Robo is not written as some Superdog, but with realistic traits. Mattie and Robo are a dedicated team who have a strong bond professionally and personally. He is truly her best friend, and when she goes missing Robo uses his search and rescue skills to find her.

Having lived in Colorado all her life, Mizushima is able to create a realistic setting. She seems to draw from current events since there have been so many wildfires this season. In the novel, she uses it to enhance the action where the fire becomes an antagonist.

“I grew up in a small town on a ranch,” she said. “I used the mountains because there is a sense of suspense and danger. This is why I wrote in the book quote, ‘Blazing orange lit the ridge above her, rapidly feeding on timber and eating its way downward. Balls of fire leapt from tree to tree, the dry needles wicking flames into branches and sap, setting off booming explosions in the treetops.’”

This is a gripping tale that has a message of hope. With Robo at her side, Mattie is trying to overcome her childhood demons and learn to tear down the wall she has built, allowing Cole and his daughters into her life.