Chargers get a boost on defense 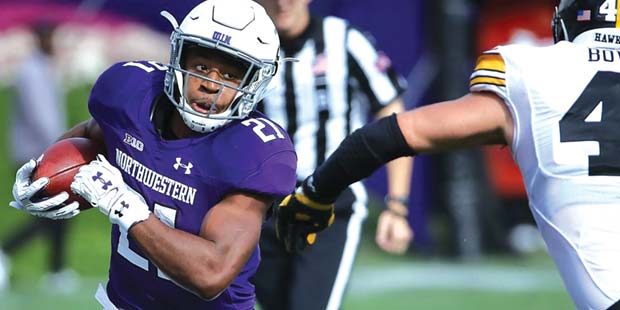 Focusing on defense early in the draft, Chargers General Manager Tom Telesco and the front office received high letter grades from draft analysts for the players they selected. As the Chargers prepared to begin its annual OTAs (Organized Team Activities), MP reporter Art Garcia Jr. caught up with Telesco to talk about his 2018 draft class.

Art Garcia: Picking at 17 normally leaves you out of the running for an elite player at the top of the draft, but things fell your way and Derwin James slid down the draft board. Most analysts ranked James one of the top 10 players in the draft. How will he be used in Gus Bradley’s defense?

Tom Telesco: The safety spot in our defense is pretty unique because we ask him to do a lot of different things as far as alignments, coverage and run responsibilities. We think that Derwin has the potential to be able to handle all of that both playing up at the line of scrimmage as a strong safety, playing back as a free safety and also having some back coverage responsibilities. So we think he brings a lot of versatility to the defense — he has some leadership capabilities, he’s big, fast and very physical.

AG: Many analysts compare James’ skill set to Kam Chancellor or Tyrann Mathieu, do you agree with those comparisons?

TT: Yeah, I wouldn’t put him in those categories just yet. Those guys are proven NFL players at this point, so we’ll see what path he ends up taking on his own. But he does have a lot of talent and drive to be great and those are two great things to have.

AG: Although every draft is different, you really didn’t think he would fall all the way down to you at No. 17, did you?

TT: No. We thought that there was a chance, but we didn’t think that chance was very high. But we were prepared in case he was there. The draft is funny sometimes, and everybody’s draft board is different. There are no two boards alike. Four quarterbacks were taken very early, which is rare to have that happen, and every now and then you need a little bit of luck too.

AG: After posting five sacks last season, I was surprised you decided not to re-sign Chris McCain. Do you see second-round pick Uchenna Nwoso filling that spot as an edge rusher?

TT: Uchenna had an excellent season this year. He was really productive and made an impact in almost every game in both in the run game and passing game. He’s tough, he’s smart and he can play some different spots for us as well, both as a linebacker and as a pass rusher. He brings a lot of versatility to the defense, and he has great make-up in that his football temperament is really, really good.

AG: It appears that between James and Nwoso you have two young and very versatile players. Do you see them lining up at different positions depending on the sub packages called by defensive coordinator Gus Bradley?

TT: Yes, that’s a good point. I think versatility is important to have, especially nowadays where the game is really spread out with a lot of nickel defense played, and having guys that can play different spots on defense is really helpful. And it helps you when you are game-planning against other teams, because they don’t know where guys are going to line up all the time.

AG: You needed to upgrade the interior defensive line, and you selected Justin Jones in the third round. What does he bring to the defensive tackle position?

TT: Justin played on a really talented and productive line at N.C. State, and I think all four (players) were drafted. Justin is 300-plus pounds and is very active, quick and explosive off the ball. He played really well at the Senior Bowl this year, both in practice and in the game. He can give us some nice depth inside as a defensive tackle, and he has a lot of upside as a pass rusher too.

AG: Does his body type remind you of anybody in the NFL?

TT: No, not at the top of my head. But big defensive linemen that play hard and hustle are not that easy to find, and he definitely does both of those.

AG: In the fourth round you selected another versatile player in safety in Kyzir White. What was it about White that impressed you?

TT: Kyzir played a hybrid safety/linebacker at West Virginia. He’s big and he’s physical — he was a really productive player there, and we see him transitioning to a WILL linebacker with us — using his length and athletic ability to play that position.

AG: Last year you addressed the offensive line early in the draft by selecting guards Forrest Lamp and Dan Feeney. Tell me about the center you drafted in the fifth round, Scott Quessenberry?

TT: Scott was a four-year starter at UCLA, where he started at both guard and center, which — again — versatility is very important on the offensive line if you can play more than one spot, and he can play either guard spot or center. He was a very reliable, productive and consistent player at UCLA, where he played against some really good competition throughout his career. He’s smart, he’s a good athlete and very tough and has great intangibles. The intangibles you look for in an offensive lineman, he all has those.

AG: In the sixth round you took wide receiver Dylan Cantrell — what caught your eye about him?

TT: Dylan is a big receiver with really good hands — excellent hands, very quick and put up some great production at Texas Tech, where they throw the ball a lot — and he caught a lot of balls there. With him, I think he has a chance to make it not only as a receiver, but with his size and physicalness, he can try to make a mark on special teams as far as covering kicks and maybe even punts as well. For a young receiver coming on the roster, it’s nice if you have that special teams background, too.

AG: Your final pick, Justin Jackson, put up very impressive numbers as a running back at Northwestern. Tell me about him?

TT: Justin was a super productive player in the Big 10. He’s been a productive runner everywhere he’s been from high school to college and played in a big-time conference where he put up tons of yards. He has decent size, is really quick with excellent vision … he just has a really nice feel for the game. He has good hands, and he’ll have an opportunity to see if he can establish a role in our backfield.

The Endzone: Jackson finished his collegiate career as Northwestern’s all-time leading rusher with 5,440 yards — third all-time in Big Ten history. He rushed for 1,311 yards and 11 touchdowns in 2017, becoming the second Big Ten player with four 1,000-yard rushing seasons. He also garnered over 100 receptions as well.

Many people were surprised Telesco didn’t draft a quarterback, however, he did sign undrafted free agent quarterback Nic Shimonek from Texas Tech. Pro Football Focus ranked Shimonek No. 11 among the quarterbacks in the draft and believe he has a great chance to have a career in the NFL.

“Yeah, we’ll see,” Telesco said. “He played really well in the East-West All-Star Game, and he had a nice career at Texas Tech, too. He’s accurate with the football, which one of the keys for playing the position is ball placement and accuracy, where he showed that in college. So we’ll see how he continues to develop here.”

While succeeding Patrick Mahomes as Tech’s quarterback last season, the 6-foot–3-inch, 220-pound Shimonek completed 68.2 percent of his passes for 3,547 yards and 30 touchdowns with just eight interceptions. Mahomes was selected in the first round by the Chiefs in 2017.