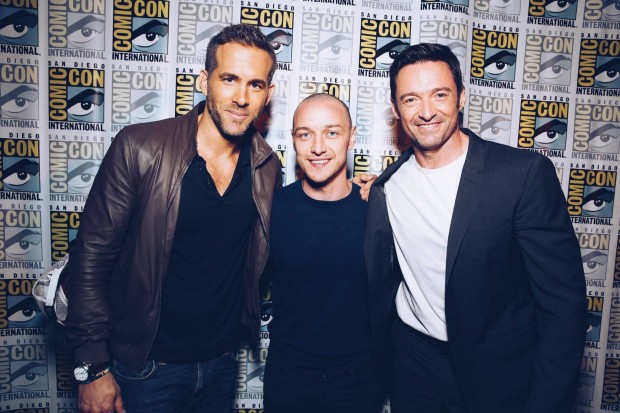 It is a weird feeling knowing that we are just 24 hours away from concluding San Diego Comic-Con 2015. Today was a marathon day that seemed to never end with film panels, television shows and more fun outside on the streets of Downtown San Diego.

The secret to the next 24 hours is to not think about it — literally do not think about it! Moving toward the finishing line is everything in the SDCC game. It is true that the feet are screaming, legs are a little wobbly (even with the few minutes between panels to get the blood flow going again), there is barely any voice left because screaming is a must if your going to have a good time at panels, but there is a bonus to losing a few pounds because eating is so far down the list of things to do!

So let’s get to this because there is a lot to cover!

In television, SyFy is bringing an exclusive screen to Comic-Con this year with the premier of “The Expanse,” which is 200 years in the future. A New York Times best selling book, it tells the story of a colonized solar system and what humanity faces. Of course I’m going to be watching — I want to know how humanity pulls it off for future reference.

“Once Upon a Time” on ABC is a guilty pleasure of mine, and I proudly admit it. With each season progressing, I am impressed at the twists and turns the writers have come up with. Across the street from Hall H looms an ominous poster that lets us know that the next season isn’t going to start out with warm fuzzies! The Dark Swan has come to the lovely small town of Storybrooke and Swan played by Jennifer Morrison says, “Emma went through a lot in her life. She had a tough childhood. She tried to be the bigger person. Now that she’s tethered to the darkness she’s going to face the darkness in herself and figure out how to overcome it.”

What else can we expect from Storybrooke? Merida from “Brave” will be joining the cast along with her bow. The Author’s quill comes up again. Hook and Camelot? Hmmmm. Regina and Robin Hood back in love? Finally, the series 100th episode is bound to bring something special.

“The Muppet Show” is also coming to ABC, and the only thing I would wish is that it was a Sunday night series because that’s how I’d like to end my weekend! So Kermit, Miss Piggy and Gonzo showed never-before-seen footage of Miss Piggy’s talk show “Up Late with Miss Piggy.” Along with, excuse me, handlers Steve Whitmire, Eric Jacobson, Bill Barretta and Dave Goelz, I have no doubt what so ever along with the cheering crowd that this series will be everything we love about our Muppets. 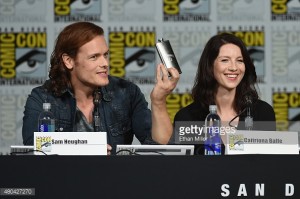 “Outlander” from STARZ is a series that I cannot get enough of. It is a smart series filled with a jaw dropping storyline and a cast that is just amazing. Leaving off last season with Jamie and Claire sailing away but to where? It seems France is their destination! Moderator Kristin Dos Santos introduced Sam Heughan and Caitriona Balfe to fans for the panel. These two actors clearly enjoy their work and a friendship that is very funny. Creator of the series Ron Moore told fans that the next season of the hit show is “new sets, a new show and it’s going to be a whole new ‘Outlander.’” Right now, 2016 seems years and years away!

Affleck continues saying, “There’s this interesting idea of Metropolis being this successful, wealthy city and Gotham being where downtrodden people live. Gotham people take the ferry to Metropolis, and there’s this idea of wealth and power, power engenders fear which made it feel real and smart.”

Batman is now sporting a metal suit called the “mech suit” and Snyder says, “It’s not really enhancing his strength more than protecting or buying him time. He’s just going to get pummeled like a piñata.”

Jeremy Irons, another beloved actor in my realm of coolness, is Alfred and Jesse Eisenberg is Lex Luthor. Rounding out the girls is Amy Adams (playing Lois) and Gal Gadot (playing Wonder Woman) brings woman-power to DC world.

Snyder tells fans, “It’s cool for me [to be doing the project] because it’s really a dream come true type of project. I’ve always been into the big icon superheroes, and with Batman and Superman after that I don’t know what you do. Getting a chance to make this particular movie with this particular cast, I don’t know how it gets better than that. It is a pleasure and an honor to be working with this group.”

Trust me when I say the trailer drove the crowd to hysterics and I heard the row in front me repeat over and over, “man this was worth the waiting in line, totally worth the wait. I have to see the trailer again!” Hey, you can’t keep a good fan down!

“Pride and Prejudice and Zombies” is a film of the English Jane Austen era in the 19th century. Elizabeth Bennet played by Lily James is not your cross stitching stay at home but instead enjoys martial arts and serious weaponry in her leisure time. Sam Reilly plays Mr. Darcy who is an upper class zombie killer and when an outbreak gets out of hand – Darcy and Bennet have got to work together. THIS is going to be good, I mean seriously, how does one zombie fight in a corset and baggie knickers?

Quentin Tarantino arrives in panel to give an eight-minute look at his new film “The Hateful Eight.” Never one to disappoint, he gave the audience a look at the film but at the same time a lesson on shooting the old 70mm widescreen format which is very “Ben Hur” old school. Bringing cast members Kurt Russell, Jennifer Jason Leigh, Walton Goggins, Tim Roth, Demian Bichir, Bruce Dern and Michael Madsen.

When asked about the leak of the “Hateful Eight” script Tarantino replied, “What pissed me off about what happened with the leak is this was one I kind of wanted to go through three drafts. I wanted to really get there. My process was my process even though I yelled and screamed about it I ended up doing what I wanted to do.” Has anyone ever thought Tarantino didn’t do what he wanted to do? That’s why he has such a huge fan base is what I’m thinking!

One of my favorite persons to hear talking about his projects is none other than writer/director Guillermo del Torro and with moderator Chris Hardwick he is on point to talk about his film “Crimson Peak.” I have listened to and spoken with del Torro and will admit I love his language (it’s a bit salty) and sense of humor. Case in point, knowing the reaction Hiddleston would get when asked to join the panel, del Torro says, “Can I ask a favor? When Tom Hiddleston comes out – ignore him!” (be still my Loki-loving heart!).

The film is set with gothic themes adding a romance between Hiddleston and Mia Wasikowska. I have seen the trailer and within 30 seconds I can honestly say I’m all in. “Crimson Peak” also stars the beauty Jessica Chastain. The film opens October of this year.

The panels for 20th Century Fox had every intention of being as epic as you wanted. The cast of “Fantastic Four” included Kate Mara, Jamie Bell, Miles Teller and Michael B. Jordan came to entreat fans with what will be coming soon to theatres. Along with director Josh Trank and writer Simon Kinberg the footage looks to give fans a taste of the new line up. Toby Kebbell plays Dr. Doom and he says, “He is the best villain of all time in any comic book ever. He’s just led by ego. Reed Richards might be a little bit better than him so I just want to destroy him. So I will. That’s a promise.” I think someone has abandonment issues!

Still not enough, would adding Ryan Reynolds to talk about “Deadpool” do it? Of course fans had no problem giving Reynolds a much deserved standing-o to the actor who said, “It is the most faithful adaptation of a comic book I’ve ever seen.” Fans were also given the treat of seeing Reynolds in full costume dropping f-bombs – oh but with style to be sure. There was so much more said but I’m keeping it clean! “Deadpool” opens in theaters February 2016. Ahhhh, greedy I see!

How about a sneak peek along with the cast of “X-Men: Apocalypse?” Jackman and his sexy self is the first one on stage with the opening of, “I’ve got three words for you guys – Old Man Logan. Read into that what you will. Playing the legend that is Wolverine is the greatest part I’ve ever had in my life. I think he’s the great comic book character ever created. I know they killed off Wolverine in the comics but in the movies he’s not done yet!” Of course this set off the audience.

The film is still in production but Singer presents a teaser for fans as the X-Men are in 1983 doing well thanks to Mystique, and ending up with McAvoy in a wheelchair and totally hairless. Asked about her character in this film, Lawrence says, “she is more Raven than Mystique in this film.”

As for Fassbender’s character Magneto, he has been trying to live a normal life until normal doesn’t work anymore.

Is that enough? No? Well…O.K., I will add one more bonus but that’s all.

How about we mix in a little Stan Lee for his yearly Hall H fix as 7,000 of his closest fans give him plenty of love and for the proverbial cherry on the cake — GAMBIT himself (and hot off his Magic Mike XXL run), Channing Tatum. Returning to the stage, Lee gets to be a part of the largest and most amazing selfie with all of his creations. How’s that for a record?

The end of the evening provides the annual Masquerade Ball for fans to strut their stuff, and their handy work in creating costumes. Ballroom 20 is transformed with every costume imaginable as Comic Con bestows their efforts with trophies, cash prizes, and a talent show that is sure to please for a big Saturday night.

The evening ended for us with another run through “The Walking Dead Escape” because night time is the right time! Also, the “FX Fearless Arena Fan Experience” is up and running. The Petco parking lot is filled with people wanting to take a moment to visit Snoopy’s House and get a good thrill from the Scream Queen ride!

Downtown San Diego is jumping this Saturday night and there isn’t a moment to be bored. Tomorrow brings the final day as Hall H lines up for some of its favorite television shows and the streets fill with families to take one more day and squeeze out the last drop of fun from San Diego ComicCon 2015!