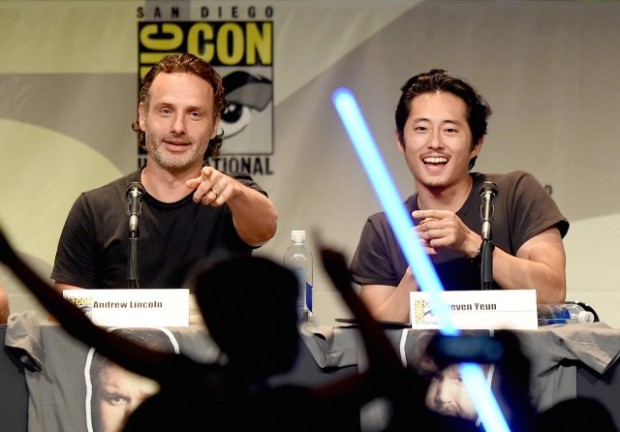 Waking up each morning to prepare for Comic-Con comes with its own set of rituals. I will impart my years of information in hopes that it helps make your Con experience a little less stressful so read on fellow Con’ians.

First, put the alarm clock across the room the night before. This will help prevent accidentally turning it off without having your eyes open completely. Those who have attended Comic-Con in the years past can attest to the fact that although exciting, each day brings a little more tired to the brain.

Knowing that, the next necessity is the largest mug of coffee that is available on this planet. Don’t dilute it with anything, just a straight jolt to make sure the caffeine kicks. Next, adjust the insoles of the pair of tennis shoes — trust me when I say all the walking just moves them around and with two days left to go blisters are not something you want to be dealing with.

Do a quick check of the bag/backpack you’re taking because this is also around the time people begin to forget their badges, wallets, camera and battery, cell phone chargers etc. Can you tell I’ve done this before? Also, with the weekend events in high gear, a light jacket or lightweight sweater is called for being next to the water if your plans include evenings.

That being said, let’s get started on Friday, Day Three of Comic-Con 2015 because there is so much to cover so lets get to it.

The morning began with a line that was literally out of this world for Hall H. I have seen long lines to be sure, but the line for Hall H was just mind blowing. It is estimated that the line was 1.5 miles long (give or take a sleeping bag or two) and mind blowing indeed. Why the line you ask? Because it is a day so many of us have waited to geek out on welcoming “The Walking Dead,” “Game of Thrones” and “Star Wars: The Force Awakens.”

“The Walking Dead” panel is one I have enjoyed for the past few years but this year even more so. With the ending of last season hanging like it did, I was hoping for some answers, or at least slip ups by the cast. Moderated by Chris Hardwick, the panel included makeup artist Greg Nicotero, Andrew Lincoln as our favorite sheriff Rick, Norman Reedus as Daryl, Danai Guirra as Michonne, Melissa McBride as Carol, Michael Cudlitz as Sgt. Ford, Emily Kinney as Beth, Chandler Riggs as Carl, Steven Yeun as Glen and Lennie James as Morgan.

There was so much to cover in a short time, or it just seems that way every year, but what we did manage to get out of the cast and executive producer Scott Gimple is that it is going to be a flashback season. That works great since most of us want to know what Morgan has been doing all this time out there in the big back flesh eating world.

Also, Sgt. Ford goes through what Cudlitz calls a “defining moment yet to come,” Carol is trying to figure out where she stands as McBride says, “She can’t stand around and watch people die. She’s ready to pay the price or go to hell to try to help.” That’s it Carol, take no prisoners!!

Daryl, a.k.a. Norman Reedus, supplied his usual fun and I’m sure you’ll find a load of selfies online. Andrew Lincoln says, “My mom is desperate for Rick and Michonne to get together” and all we can say is good on ya Mom — we couldn’t agree more now let’s get it done!

In case you are wondering or marking your calendar, “The Walking Dead” is back Sunday, Oct. 11 at 9 p.m. on AMC. 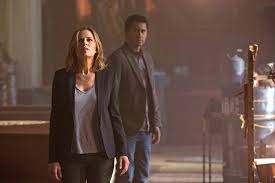 If “The Walking Dead” isn’t enough, how about “Fear the Walking Dead,” which will begin soon. Chris Hardwick is back at the podium with the new cast including Kim Dickens, Cliff Curtis, Alycia Carey, Frank Dillane, Elizabeth Rodriguez, Ruben Blades, Mercedes Mason and Executive producers Gale Anne Hurd, Greg Nicotero and Dave Alpert. The prequel to “The Walking Dead,” fans are finally going to get more of what they’ve been asking for west coast style! AMC brings this new series to us Aug. 23 and the trailer gives a glimpse of what we will see.

Are there differences between the two series? Nicotero says, “You can’t really compare the two shoes. “The Walking Dead” has these bigger-than-life characters like Rick and Daryl. What’s great about this show is that they’re everyday people. Curtis plays Travis, a high school teacher and he doesn’t have a gun, he doesn’t have a sword.”

What’s the catch zombie wise? The zombies are less zombie looking “somebody that you are sitting next to and you look at them and they don’t look well. Your instinct isn’t ‘oh I should shoot this guy in the head,’” says Nicotero.

The story is two families who are trying to keep it together. Travis and Madison work at the local high school. Travis is an English teacher and Madison a counselor, both have kids from other relationships and are trying to make it work. Suddenly people are afraid hearing about a virus and it becomes clear that no one knows is safe. A fantastic trailer for the new series looks seriously cool. 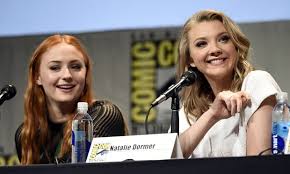 “Game of Thrones,” created by George RR Martin, has fans going completely crazy with the ending of last season still fresh in our minds. The panel led by Seth Meyers brought out Maisie Williams who plays the clever and now blind Arya Stark, Gwendoline Christie who plays the badass lady-in-armor Brienne, Natalie Dormer as the delightfully tricky Margaery Tyrell, Alfie Allen as Theon or “Reek” as he is known now, Conleth Hill as Varys, Liam Cunningham as Davos, and Sophie Turn as the ever surprising and married again Sansa Stark along with producer Carolyn Strauss and director David Nutter.

The most surprising discussion on the panel was when Nutter spke with President Obama, who wanted to know “you didn’t kill Jon Snow did you?” and Nutter replied, “Mr. President, Jon Snow is deader than dead.”

Great — now I have to rethink this whole “maybe Jon Snow is alive and it’s a twist” train of thought.

Just to keep the delight going, “Game of Thrones” gave the audience a look at audition footage for Rose “You know nothing Jon Snow” Leslie, Gwendoline Christie and even Natalie Dormer. 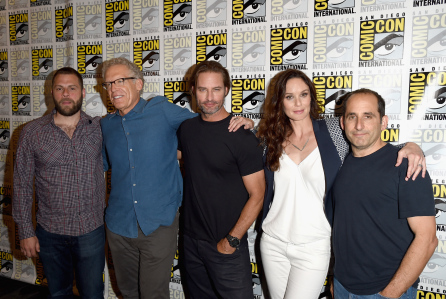 Outside of Hall H there were television shows bringing their best and brightest. From the USA Network, the series “Colony” had a panel that included Josh “Lost” Holloway, Sarah “The Walking Dead” Wayne Callies and Peter Jacobson. USA brought the first eleven minutes as a sneak peek to the premier episode that tells the story of a family that struggles to survive and bring back liberty to the people of an occupied Los Angeles.

Also, History’s “Vikings” panel brought creator Michael Hirst, Travis Fimmel as Ragnar, Katheryn Winnick as Lagertha, Clive Standen as Rollo and Alexander Ludwig as Bjorn. Debuting a Season 4 trailer is seems Bjorn is going on a spirit journey, Ragnar comes close to death but still manages to get a new gal, and King Ecbert is not forgotten.

“Ash vs. The Evil Dead” made its fans frenzied appearance thanks to STARZ as Bruce Campbell returns as a drunk working at S-Mart but that’s a temporary gig especially when the Deadites come back. He doesn’t have to fight them alone this time as Lucy Lawless joins the cast of ass-kickers. The entire panel was filled with laughs and a camaraderie that is going to make this series a smash. Sam Raimi directed the pilot for the series but admitted he would continue if the show is extended. The series will air Oct. 31 on STARZ.

Back in Hall H! 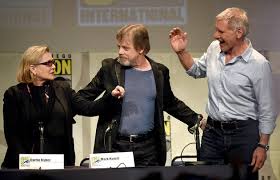 For many of us who remember being in a movie theatre in 1977 and experiencing a galaxy far, far away, today was like stepping into a time machine. “Star Wars: The Force Awakens” arrives in theaters this December, a mere 35+ years later, to light our imaginations. On the panel was moderated by Chris Hardwick who opened by saying “Guys, we are in this! This is happening right now! I know a lot of you guys waited a long time to get here. Decades really!” – truer words were never spoken before!

Hardwick introduced Lucasfilms’ Kathleen Kennedy, director JJ Abrams and screenwriter Lawrence Kasdan to the stage. Eager to see anything on the new “Star Wars,” fans were told there wouldn’t be one until the fall but instead the audience was treated to a behind-the-scenes reel that was pretty cool.

The panel wouldn’t be complete without Carrie Fischer who has embraced her inner Princess Leia. Mark Hamill joined as well with a picture of him from 1976’s Comic-Con. Then – Harrison Ford walked out to screams and cheers that were completely deafening. Watching the embrace of these three iconic actors was enough to bring this Star Wars fan to tears.

If all of this wasn’t enough of an emotional roller coaster, Abrams asks, “who wants to see a life ‘Star Wars’ concert right now? We only have room for all of you” as everyone is given a badge that gave them access to a performance of John Williams’ amazing score.

Yes, we wish there were more of us to go to absolutely everything we want to but I have to admit there is nothing better than getting outside and feeling the cool air after an amazing day.

The streets are filled to the brim as everyone begins to enjoy the outdoor activities and, of course, pray that the line for Hall H still has wrist bands available.

Tomorrow is going to be equally as insane and we will be taking our lives into our own hands as “The Walking Dead Escape” awaits us — photos and details are absolute dear readers. For now I’m off to soak my feet!