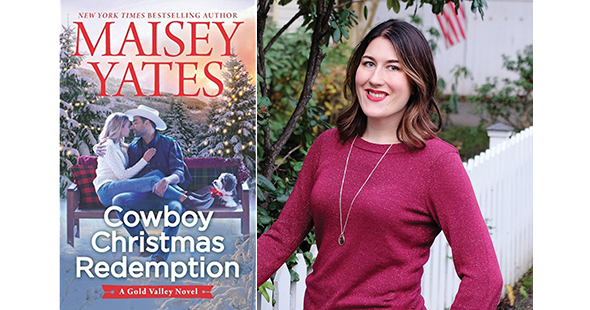 Cowboy Christmas Redemption by Maisey Yates is written in the same spirit as the old Jimmy Stewart movie, “It’s A Wonderful Life.” There are pieces of both that are not blushingly happy and celebratory. Yet, in the end there is a happy ending.

Caleb Dalton has loved Ellie Bell from the first minute he saw her but because she was going to be married to his best friend, Clint, he repressed his feelings as much as he possibly could. Four plus years ago, Clint died in a helicopter accident while fighting a fire. Knowing his friend would want him to step in, Caleb held Ellie when she was sad. While she grieved, he was there for the birth of her child Amelia, and has been a surrogate father for Amelia ever since. To Ellie, he is her best friend, her rock, and her salvation.

“I wanted to show how important firefighters are. Firefighters are so crucial, especially to those who live in woodsy areas.  Where I live we are surrounded by trees and mountains and get a lot of wild fires. I knew someone in high school who became a fire fighter. In my twenties, I read how he died in a helicopter crash fighting a fire and was newly married. I thought a lot about his wife even though I did not know her. How do people come back from that?”

As the holidays approach, Ellie once again is dreading it as she has every year since her husband died.  But for the sake of her daughter, she enlists the help of Caleb and his family who treats her like one of their own.  But this year, something is different for Ellie, and she makes a decision to no longer want to be a widow. She makes a list of all the things she wants to do. She wants to dance and be kissed by someone who wants her, something fun and uncomplicated. Caleb isn’t having any of that, after she shows the list to him. If anyone is going to be kissing Ellie and sharing in her fun it is going to be him. After they decide to pursue the intimacy between them it becomes off the charts. Caleb and Ellie had amazing chemistry; yet, they also had to go through an emotional roller coaster ride. They must get beyond the festivities and traditions of the holiday season, realizing their relationship is going from friend to lover.

Thea author noted, “He was in love with Ellie even before she lost her husband, Clint.  Clint was also Caleb’s best friend.  Because Caleb was in love with Ellie the first time he saw her he had guilt over those feelings even though he never acted on them.  But he also had grief for losing his best friend.  Ellie had guilt over realizing she loved Caleb in a different way than she loved Clint, that it was more intense with Caleb.  She also for many years would not let go of her emotional grief she had over losing Clint.”

This is a heart-warming story of moving forward and taking chances. It is a tale filled with twists and turns that will drain readers emotions and will grip their heart.