Dana Point Turkey Trot Wraps Up 35th Annual Race and Looks Ahead to 2013.

2012 Thanksgiving Day Run Concludes as One of the Biggest and Best Races to Date; Donates $30,000 to the Dana Point 5th Marine Regiment Support Group

The Dana Point Chamber of Commerce, the official organizers of the race, joined together with RUN Racing to provide 2012 participants with race enhancements that included: a return to two 5K start times to alleviate over-crowding, moisture-wicking technical t-shirts, finisher medals for all participants, and fun photo opportunities along the course. 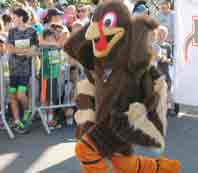 In addition, the Dana Point Turkey Trot held a two-day Health and Wellness Expo on Nov. 21 and 22, offering the community a variety of exhibitor booths that included the latest in health and wellness, as well as industry expert speakers and local fitness celebrities. Dean Karnazes, the “Ultramarathon Man” and one of Time Magazine’s Most Influential People, was on-site at the expo to sign books and autographs at The Greek Gods® booth, participated in both the 5K and 10K, and kicked off the Kids’ Gobble Wobble. Alongside Karnazes, Dana Point Mayor Lara Anderson and Colonel Roger Turner, commander of the local 5th Marine Regiment, called the start of the race and joined the thousands of participants in the family fun of this Thanksgiving Day tradition.

“For 35 years the Dana Point Turkey Trot has been an Orange County tradition for thousands and we are so pleased to have had another successful year in bringing fun to local families and support to our local Marines,” said Heather Johnston, executive director, Dana Point Chamber of Commerce. “We want to thank this year’s sponsors for making this the biggest and best race to date. Stay tuned for what’s to come in 2013 to make the 36th annual Turkey Trot even better.”

The Dana Point Turkey Trot is now accepting sponsors for the 2013 race, ranging from Title Sponsor and Friends of the Turkey Trot, to expo exhibitors and race t-shirt sponsors. Organizations will reach thousands of runners, athletes and community members, and millions more through media impressions, all while making a vital impact on the local economy in Orange County.