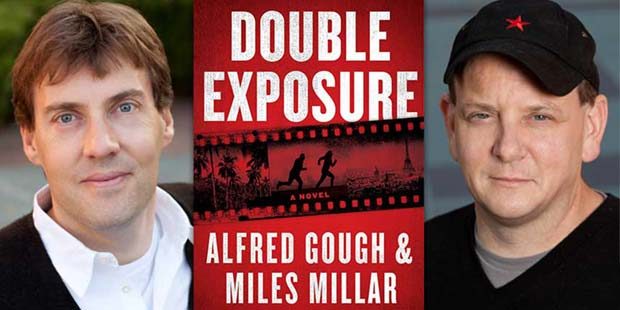 “Double Exposure” by Alfred Gough and Miles Millar, the creators of the TV series, “Smallville,” brings to life a unique storyline. Set in the 1960s to make the story believable, they explore the question, “what if Hitler did not die in the bunker, and is still alive?”

“We initially imagined ‘Double Exposure’ as a movie, but as soon as we started breaking the outline, it became clear that the scope of the story was too big and would be more suited to a novel with the period setting, the globetrotting locations, and the elaborate action set-pieces,” the authors said. “Although ‘Double Exposure’ is our first novel, we came to it after spending the entirety of our professional lives as screenwriters. We approached the story exactly the same way we would if we had been writing a movie or TV pilot. Like any great movie thriller, we wanted the narrative to have a propulsive drive. We loved the idea of starting with a real historical event and then using it as a jumping off point to spin our own wild, globe-trotting yarn.”

The plot begins with a KGB Russian agent, turned CIA asset, smuggling a film canister over the Berlin Wall. Because the East Germans shot the agent as well as the canister the CIA now needs help in attempting to repair it. They turn to David Toland, a decorated Korean War veteran, who wanted to leave his combat days behind him. Now the director of preservation for the Library of Congress’s National Film Archive, he is asked to restore the film by CIA Agent Lana Welles. The film shows Hitler is still alive, well, and dangerous. Because there are those that want to restore the Third Reich, Welles and Toland put their lives in danger as they attempt to pursue Hitler all over the world. Traveling to Russia for clues, they are saved by Simon Lean who is masquerading as a best-selling author. They join forces in their pursuit to find Hitler and to end his attempt at regaining power.

Each of the characters are formidable. The authors wrote “David Toland’s skill as a film restoration seemed unique, and was one that hadn’t been explored before in either a novel or a movie. We imagined him as the Indiana Jones of film restoration. He is conflicted about his life as a soldier so he escaped to this job so he does not have to deal with the real world. Now he is put in a situation that has world altering consequences. Lana plays things close to the vest and is very serious. She has to conform to being a woman in a man’s world. We wanted her to be the one to drive the plot. She is a strong female character who is mysterious and keeps David guessing. Simon is self-serving, in it for himself. The best party guest. A mercenary without much moral compass.”

The novel is action-packed as the characters journey around the globe from Washington, D.C., to Europe to South America. Betrayals, lies, deceptions, and deceits are at the heart of the story. David realizes that not everyone is who or what they are, learning that trust is a rare commodity with all the many traitors and moles.